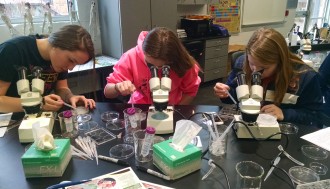 “Discovery and detective work gets lost when we merely lecture on concepts and principles,” Dr. Wendy Beane, Western Michigan University assistant professor of biological sciences, says. “Getting hands-on is where the excitement is.” She and colleague Diana Blouin, WMU biological sciences undergraduate academic advisor, have started engaging high school students in STEM (Science, Technology, Engineering and Math) projects as well as talking to them about how to pursue those fields in the future, if something sparks their interest.

Blouin had connections in Gobles, which is a Project Lead The Way school currently offering three biomedical courses (principles of biomedical sciences, human body systems, and medical interventions) in a state-of-the-art lab. STEM instructor Bob Lisowski wanted someone to speak to his classes; Beane was willing to talk, but thought the students might rather work with animals like she does (since she studies regenerative mechanisms of planarian flatworms)

So on Dec. 8, the trio conducted a pilot study involving four separate STEM classes combined into three separate presentations/lab practicums. Eighty-five students participated in a 25-minute science lecture, a 10-minute biological sciences career information session including handouts, and 30-40 minutes of practical (hands-on) experience. The lab focused on stem cell and regeneration experiments, which examined planarian flatworm regrowth following micro-surgeries performed by the students.  In addition, students were able to manipulate the regeneration process and then follow regeneration (post-visit) over the next two weeks.

“The students were so excited, they were taking pictures with their phones,” Blouin said.

The sessions were extremely well received. “Western Michigan’s research on stem cells captivated my students,” Lisowski said. “The presentation and hands-on activity with flatworms really opened their eyes to the value of biomedical science research. Some of them are now excited about entering WMU to take part in such valuable research."

That’s where Blouin’s efforts come in. “I can really speak to people entering STEM majors at a university—hopefully our university,” she said. One student upon which the project definitely made an impact was senior Emily Bolhuis. “I didn't think that I wanted to go to Western before,” she said. “But after their visit to my class and seeing what kind of research is done at Western, I knew that WMU was the school for me.”

Blouin tries to help students connect with the proper majors and education. “They can see something done but have no clue how to get there,” she said. “Putting a face to it really helped student connect the experience with research at Western.” As a result of the visit, students can contact Blouin earlier, get their questions answered and find out about options for majors that will help them pursue their goals. She distributed flyers about biology and biomedical sciences, and what students can do with each major.

“What made (the project) work so well is that it wasn’t just me and the instructor talking about science without the practical aspect,” Beane said. “It was really the combination of the commitment of the local institution to follow up, engaging in the practicum, and Diana giving them information on how to get into our program.” She added, “it allows (students) to connect with professors and graduate advisors on a personal level,” making the college experience “less scary.” The pair plans to make this activity an annual event at Gobles, but would like to expand to other schools as funding is available.

Beane believes that as a nation, we don’t do a good enough job exposing kids to the most interesting part of science. “Their exposure is from TV — seeing in one hour what would take weeks in real life, and finding the criminal,” she said. “There’s trial, error, observation and detective work…you don’t know what the answer is going to be.” This is what she hopes to engage students with; hopes they get a feel for what it’s about.

The United States Department of Education also places a high priority on STEM. “The United States has developed as a global leader, in large part, through the genius and hard work of its scientists, engineers, and innovators,” it says on its website, www.ed.gov/stem. “In a world that’s becoming increasingly complex, where success is driven not only by what you know, but by what you can do with what you know, it’s more important than ever for our youth to be equipped with the knowledge and skills to solve tough problems, gather and evaluate evidence, and make sense of information. These are the types of skills that students learn by studying science, technology, engineering and math.”

Few American students pursue expertise in these fields, however, and there is an inadequate pipeline of teachers skilled in those subjects. As a result, President Barack Obama has set a priority of increasing the number of students and teachers who are proficient in these fields.

The department projects that between 2010 and 2020, there will be increases of 14 percent in mathematics jobs, 22 percent in computer systems analyst jobs, 32 percent in systems software developer jobs, 36 percent in medical scientist jobs and 62 percent in biomedical engineer jobs.

President Obama has articulated a clear priority for STEM education: within a decade, American students must “move from the middle to the top of the pack in science and math.” The Committee on STEM Education (CoSTEM) is facilitating a cohesive national strategy to increase the impact of federal investments in the areas of improving STEM instruction in preschool through 12th grade, increasing and sustaining public youth engagement with STEM, improving the STEM experience for undergraduate students, better serving groups historically underrepresented in STEM fields, and designing graduate education for tomorrow’s STEM workforce.