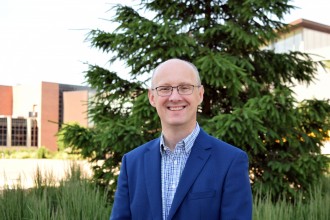 Nicolas Witschi, Western Michigan University professor of English, will serve as acting associate dean in the College of Arts and Sciences for a one-year term beginning July 1. Witschi currently serves as the chair of the Department of English, a position he has held since 2015. He has previously served as associate chair and graduate advisor in the department.

Witschi holds a Ph.D. in English from the University of Oregon, an M.A. in English from the University of Colorado and a BFA in film & television from the Tisch School of the Arts, New York University. He has authored and co-edited several books, as well as numerous peer-reviewed essays, reference entries, book reviews and conference presentations. He has received support for his scholarly work from the Houghton Library, the Huntington Library, the Fulbright Program and the National Endowment for the Humanities.