Students Take Hold of Lifeline for Success Through Intensive Program

Cammi Lucia refused to fail her first-year writing course at Western Michigan University. It wasn’t that she didn’t have the smarts, or the skills, or the drive to complete her assignments. Life, and circumstances that were out of her control, simply got in the way.

Lucia, of Grand Blanc, was making every effort to balance obligations at home with the unfamiliar experience of being a new college student. A missed class here and there turned into repeated absences, and soon, she found herself at risk of not passing English 1050, an important prerequisite to much of a student’s education at WMU.

“I was having many unexpected events happen in my personal life that made it difficult to attend class,” Lucia says. “Other than that, I really had no issues with the course.”

Concerned with Lucia’s progress, yet encouraged by her capability, her instructor saw an opportunity for Lucia to get back on track and complete the work necessary for passing the class. Through an intervention program called English 1050 Intensive, students like Lucia – who are determined to achieve but are facing obstacles in the process – are given an alternative option.

“We strongly believe that if we accept students into our University, we have an obligation to find ways for them to be successful,” says Dr. Jonathan Bush, professor of English. “The students we work with know that, for whatever reason, they are not going to pass the standard version of 1050. Through the intensive program, achievement is much more possible. What we’re essentially doing is giving them a lifeline for success.”

Bush sparked the idea for the program in 2014 after witnessing so many first-year writing students struggle because of extenuating circumstances. He went to his colleagues in the Department of English, Dr. Adrienne Redding and Dr. Jeanne LaHaie, who made the concept a reality. Redding, faculty specialist, and LaHaie, former faculty specialist, created the program together, designing and implementing the course and materials.

Redding, who has been a key driver of the program since day one, has served as its director since 2016. She, along with Bush and part-time instructor Dr. Lisa Lishman, each currently work with about 10 to 12 students during the semester. Since its inception, English 1050 Intensive has served 151 students total.

“Occasionally there are remediation issues, but we see far less of that than we expected,” Redding says. “More often, there are really significant circumstances that come into play.”

“We were seeing students failing the course who were clearly capable of passing, but other factors were getting in the way,” Bush adds. “Those factors were anxiety, home issues, illness, emotional issues. Sometimes a student just felt like they couldn’t talk to their instructor.”

Nearly all students referred to English 1050 Intensive are there because of an underlying cause. While the program is open to the entire undergraduate population, about 90 percent of Intensive participants identify as first-generation college students, many with “significant responsibilities at home,” Bush says. Sixty-six percent identify as underrepresented minorities.

Enrollment into the program is based on a referral and application system. Midway through each semester, English 1050 instructors receive an electronic survey that allows them to refer struggling students into the intensive program. The program faculty then contact those students and invite them to apply.

“We take as many students as we can,” Redding says. “For example, this year we had 71 referred to us by instructors. We ended up with about 30 of those students. Some choose not to take advantage of the program for one reason or another, but we’ve never not accepted anyone. That contributes to our success levels too, because we get the students who are motivated enough to apply.”

“The students know they have a good opportunity here,” Bush says. “Basically, what we’re doing is giving them hope.”

Bush and Redding are quick to reiterate that English 1050 Intensive is not a remediation program; on the contrary, it requires an extensive amount of work on the student’s part, and in a condensed amount of time.

“There is no special designation; the course shows up as regular 1050 on their transcripts,” Redding says. “There are four components of writing that the students complete for us, the first three of which are stepping stones to a final research paper. Through these four components, they are really able to demonstrate or develop the skills to write at the college level. And we do this with them in six weeks, generally.”

According to Bush and Redding, about 90 percent of the at-risk students they work with pass the course with a required C grade or higher. The biggest factor to their success, they say, is being able to work individually with the faculty members. English 1050 Intensive participants spend one hour a week in one-on-one sessions with their professors. They meet collectively on Fridays in Waldo Library and the faculty consult with each participant individually. 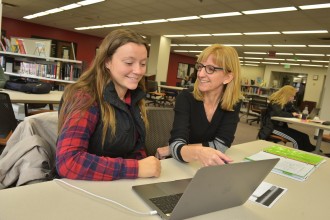 “We spend a lot of one-on-one intensive time helping them craft their papers and connect with a research topic they’re really interested in,” Bush says. “No matter how great of an instructor you are, in a large class setting you can’t do that.”

“Everything we do in the course is so purposeful and sets them up for success in other areas as well,” Redding says. “Overwhelmingly we hear, ‘this helped me with my organizational skills, it really helped me with time management,’ or ‘I feel like I can ask the teacher questions.’ Because a lot of the time students come to us and say going to the teacher is not a comfortable behavior.”

Bush and Redding say the one-on-one relationships ease the frustration or embarrassment a student might feel about not understanding the course material within the context of a large class setting. Lucia, who describes the time she has spent with Redding as “absolutely great,” agrees.

“Being able to have these one-on-ones really helps me understand the content of my assignments and how to do them correctly,” Lucia says. “And I know I can always go to Dr. Redding for help or if I have any questions.”

Pushing the needle on retention

Data collected by the English 1050 Intensive faculty indicates that students who do not pass first-year writing have the highest likelihood of leaving the University. Of those students, only 33 percent matriculate from the first to second year of college. But encouragingly, the retention rate of students who take advantage of and pass English 1050 Intensive is significantly higher – averaging between 64 to 66 percent. During the last full semester of the program, that number rose to 68 percent.

“We’re really proud of this program, because our efforts actually move the needle on institutional retention,” Bush says. As the English 1050 Intensive course proves, even small numbers of students have the ability to push that needle. Serving 25 to 30 students per semester, the program has raised first-year retention of the University’s more than 23,000 students by 0.7 percent overall and by 1.6 percent among those who took first-year writing in the 2016-17 academic year.

Beyond numbers, the program’s life changing impact is most evident in the students it serves. “Being part of this program has helped me understand writing in a different way,” Lucia says. “It has helped me not just in this class, but in other classes and my everyday life. I am much more confident now because of this course.”