“It just opens one’s eyes to how big and different the world is but also how similar we can be even though our worlds seem so far apart,” says Emily Warren, who took the trip in summer 2016 while an undergraduate student in anthropology and comparative religion. “ Being on the trip I learned something new probably every hour, but it didn’t feel like learning – it was simply engagement and adaption to new surroundings.” 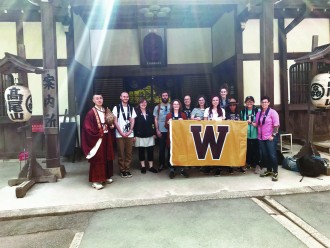 The three credit-hour class includes two weeks in Tokyo, with an optional extra week in Kyoto. This year, 11 students participated in the former, with seven staying for the latter.

“Running around Tokyo for the first time was incredible,” says Kendra Combs, a psychology alumna who took Covell’s first trip in 2005. “You really can't express in words how electric and sensational that city is.”

Covell’s background includes 10 years living in Japan, and through that he has developed numerous contacts to whom he reaches out to enhance his students’ experience. “Through Dr. Covell’s connections in Japan we were able to stay at one of the most famous temples in Tokyo (Zojoji), view the treasure room of Sensoji, have open discussion with priests of various sects, and explore sides of Japan that not even most natives get to see,” says participant Eric Teixeira Mendes.

While in Tokyo, the priests’ dorms at Zojoji were their home base while traveling to museums, temples and shrines. “Staying at the temples is absolutely the best part,” says Combs, who later returned to Japan twice, once as a Fulbright scholar in Kobe. “To really immerse yourself in the situation – it was so incredible. So many times I kept saying to myself, ‘Is this real? How am I this lucky?’”

The group met with leaders of lay Buddhist and Shinto movements, giving the students a chance to converse with people from a variety of religious practices.

She especially enjoyed hiking up a beautiful mountain, engaging in a waterfall purification ritual, then continuing up the mountain to a temple where they learned other meditation rituals and spoke one-on-one to the priests. Covell lectures at Taisho University, and trip participants spent a day getting to know students there, walking through the shopping district and participating in a tea ceremony. While their knowledge of each other’s language was minimal, they found ways to communicate – frequently through phone assisted translation. The two groups also enjoyed a joint outing to the city of Kamakura. 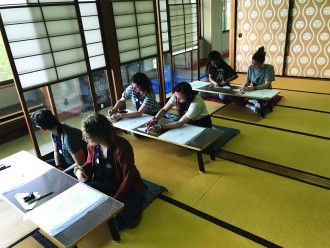 Nick Ferraro, a film, video and media studies alumnus on the 2006 trip, found the classes with Japanese college students very meaningful. “One class involved the differences of cultures when it came to superheroes,” he says. “We compared the American Superman with Japan’s Goku from Dragon Ball Z. In addition to that class, the Japanese students were interested in America’s gay culture and how we as students understand it.”

Through the WMU alumni group in Japan – which hosted a dinner for the visitors – the students procured tickets to a sumo match and toured a high-end kimono shop. Riding the bullet train to Kyoto, they experienced fast transit – a 155 miles-per-hour ride so smooth that five minutes in, students asked if they had left the station yet. In addition to visiting temples, shrines and lovely gardens, they stopped at Kyoto Seika University – the only one in Japan to offer a degree in manga art – where they collaborated with students to design a WMU mascot. Mendes says the field school changed his life forever – giving him intimate contact with a culture he was fascinated by and turning that fascination into a career.

“It was during this trip that I first encountered Shinto and Buddhist amulets, which became the topic of my thesis, a book chapter and now a project incorporating the Japanese diasporas’ relationship with these objects in Brazil and the U.S.,” he says.

Ferraro, who now works for Panasonic in Buffalo, New York, found that learning and experiencing the courtesies and customs of Japan helps him daily at his job – allowing him to give his company’s Japanese employees “the proper courtesies and customs that they are probably not used to getting from their American counterparts.”

Covell would like as many students as possible to have this study abroad opportunity and is actively raising scholarship money to make the class more affordable.

View this story and more in the 2019 issue of WMU's Arts and Sciences Magazine.

The Japanese Religion and Culture Study Abroad Seminar will be offered again in 2021.

The program will be split into two parts to make more affordable options. The first part is the original two-week three credit-hour course that centers around the home base Zojoji in downtown Tokyo. The second part includes Kyoto, Hiroshima and Miyajim. Contact Dr. Steve Covell if you or someone you know is interested in the program. Non-WMU students may be accepted.