Wrongful Conviction Program changing one life at a time 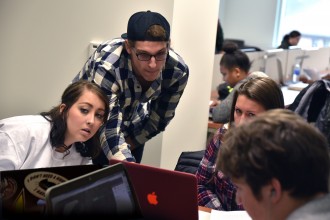 KALAMAZOO, Mich.—Students in Western Michigan University's Wrongful Conviction Program are changing the world, one life at a time.

"I cannot imagine getting convicted of a crime I didn’t commit," says Dr. Ashlyn Kuersten, director of the Wrongful Conviction Program and professor for the course. So she and her students work diligently to prove the innocence of those who were wrongfully imprisoned—and to pass promising cases on to the WMU-Cooley Law School Innocence Project.

While most innocence projects—whose purpose is to exonerate the wrongly convicted through DNA testing and reform the criminal justice system to prevent future injustice—use law students to do research, WMU's program allows undergraduate students the opportunity to research potential cases of innocence. Kuersten's students learn from her about the most common causes of wrongful conviction, then work on evaluating the requests from inmates who contact her claiming innocence.

She has a backlog of 5,000—from Michigan alone.

Kuersten has 25 students in her class this fall and five graduate students who organize the research on these requests.

"Undergraduates love this work," she says.

Students from any major can apply to participate in the class; many of the students in this fall's class are criminal justice majors. Once the student researchers find a case with merit, they pass the case along to be litigated by the legal team that is part of the WMU-Cooley Law School Innocence Project.

A huge boon to the program is a large grant Kuersten received to facilitate DNA testing on worthy cases.

The class is extremely popular—400 students contacted her to express interest in being part of her spring class.

"I have an unlimited number of eager, smart, well-educated, ambitious researchers," she says.

Ashley Chlebek, a criminal justice and sociology major who will graduate in December, says the class has changed her perspective.

"Not everyone knows what goes on in the criminal justice system," she says. "It's supposed to be fair and just, but there are a lot of problems."

This project can "bring awareness to the amount of times things happen."

Keiondra Grace, a doctoral student in sociology, who has spent time studying the impact of incarceration on an inmate's family members, says being involved with the program has given her a better grasp on how the process works.

In addition, "this program gives a voice to inmates … and sheds light on the inequalities of the system," she says.

Kuersten recalled one case in which a man was trying to contact them, but couldn't fill out the questionnaire that her office uses to begin researching a case. He was illiterate.

She is optimistic that the upcoming generation will "figure out a better way to manage our criminal justice system and social services in our state."

Seeing the statistics on wrongful conviction helps students realize "this could happen to my friend, neighbor or dad," says Olivia McLaughlin, a doctoral student in sociology with an emphasis in criminology and gender. "I think this keeps them motivated and engaged."

She says students in the program had a chance to do what many academics—who often do research for the sake of research—do not.

"We are connecting learning with action and staying out of the ivory tower," she says. 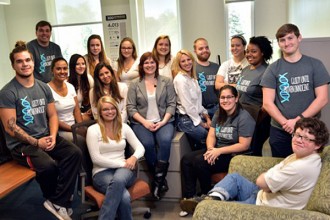 Entrance into the wrongful conviction course, SOC 4950, is by Kuersten's approval. Interested WMU students may apply for the spring class by contacting her at wmu-wrongfulconvictionproject@wmich.edu. The following students are a part of the fall 2016 course.