The University Libraries hosted WMU student Darien Burress as an artist-in-resident in Waldo Library in November 2019. Burress was a featured artist in the exhibition, “Where We Stand: Black Artists in Southwest Michigan,” a community-wide celebration of African American art.

As an artist-in-residence, Burress set up a studio space in Waldo Library and created a unique piece of art over five days. Members of the public were invited to watch Burress paint in the open studio space and learn about her process by attending an artist talk on Burress’ process and inspirations for her visual art. 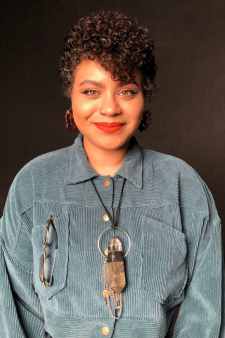 Darien Burress is an artist with a passion for mixed media, ranging from sculpture to film photography. The Grand Rapids native, after years of juggling being a student and activist, took in her artist cap full-time this year after finishing a series of five mounted Vandyke prints titled “Restoration.” She has shown at Kalamazoo Valley Museum in celebration of Juneteenth, as well as at the Devos Place as a part of the Shade of Blackness Exhibition, and the Kalamazoo Institute of Art in the Where We Stand Exhibition.

All of Darien’s works have a personal message surrounding the idea of blackness, which harks back to her personal struggles and experiences surrounding blackness and those of the black community. She often incorporates natural elements and forms found from the earth as a part of her inspiration. She seeks to demonstrate a sense of unity and strength within her work and disrupt the everyday. When not making art, she enjoys playing roller derby and thinking about how to dismantle systems of oppression, and one day make a change in this world.