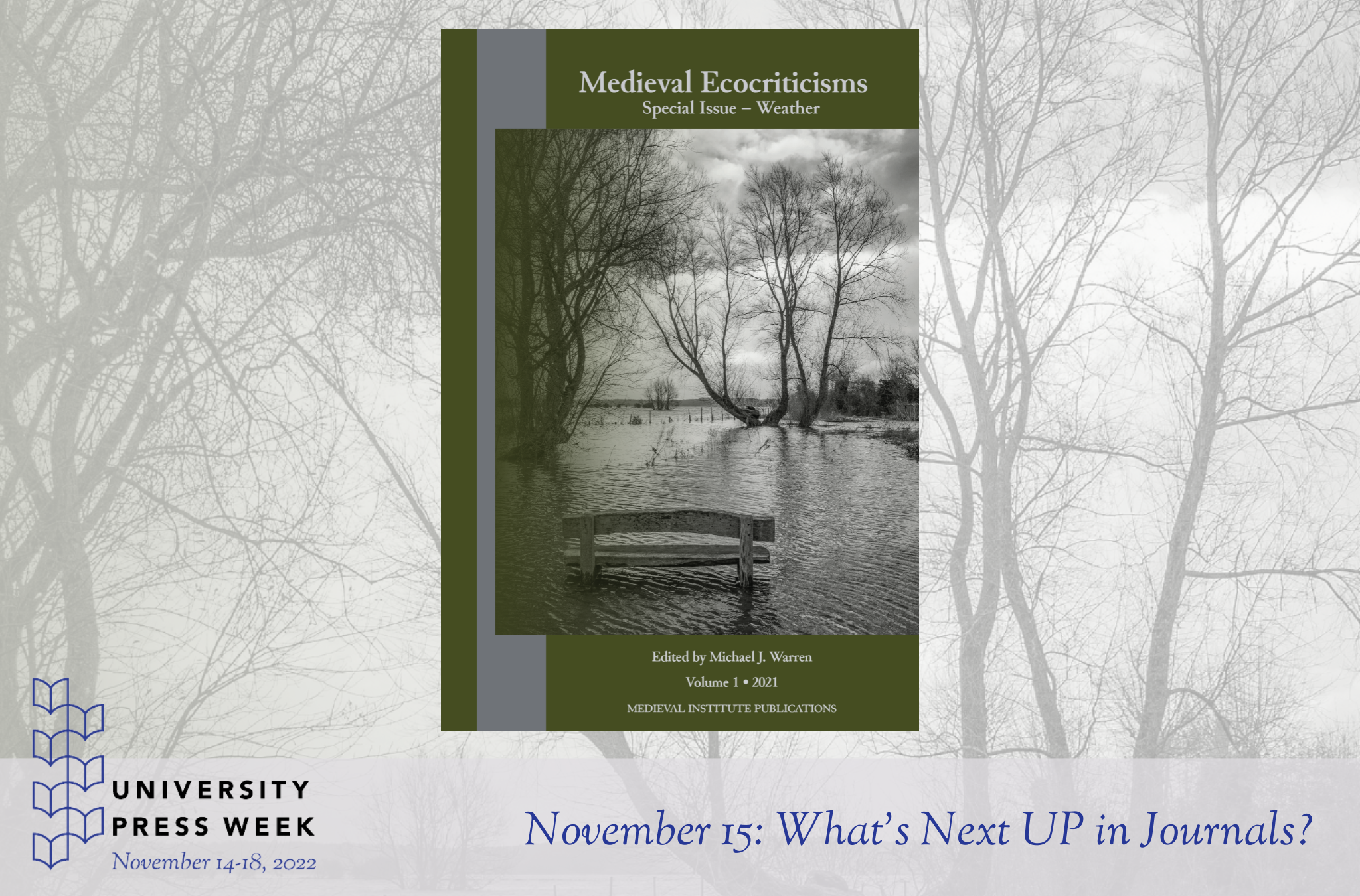 Posted by Becky Straple-Sovers on November 15, 2022

MIP's newest journal is Medieval Ecocriticisms, the first regular venue dedicated to medieval ecocritical studies, which seeks out the most current and innovative interdisciplinary approaches to the study of literature and the environment in the global Middle Ages. We asked one of the editors of Medieval Ecocriticisms, Dr. Michael Warren, who edited the first issue of the journal, to tell us a little bit about the journal and its work.

MIP: What is "medieval ecocriticisms," for those unfamiliar with the field?
MW: Ecocriticism is informed by a sensitivity to ecological realities and complexities. Ecocritics, broadly speaking, desire an "earth-centered approach," both in their own theoretical perspective and in the depictions they study. The science of ecology–the systems of relations between organisms and with their habitats–is at the heart of the field's specific interest in physical environments, the prolific, interrelating systems of life living in these environments and the ways this life appears in literary representations. We develop, in Greg Garrard's words, "ecological literacy." Importantly, those systems of relations include us. Ecocriticism, then, is the study of how texts represent the nonhuman and its relations to the human from an ecological viewpoint.

MIP: The description of the journal also mentions the "post-human turns in humanities research" and argues for the necessity of studying the "non-human." What does this look like, and why would you say that attention to the non-human is necessary for medieval studies or for humanities scholars in general?
MW: It is central to the ecocritical ethos that we give due attention to that which is not human, deliberately turning away from anthropocentric interests. But it would be false to claim that the human is not bound in nature's complex web of interdependent connections, and ecocritical studies can indeed be self-consciously about the human. Just as definitions of the human are fraught by conceptualizations that make us animal and not-animal at once, so ecocritical interests paradoxically include and exclude the human. This means that where the human does appear in texts–which is often and prominently–one aim is to reveal and explore how this species relies on nonhuman networks which shape and delimit its very existence through and by their own vibrant agencies. Alternatively, but in the same agenda, green critics draw attention to moments of anthropocentric representation, noticing where it has not been noticed before (and with ethical concern) how the natural world is routinely and axiomatically denied intrinsic value.

MIP: Why are medieval ecocritical studies important?
MW: Medieval ecocritical studies are ever more important because the broad topic of the environment is ever more important! It is, surely, the most pressing issue that humanity (and all life, because of us) faces right now. It is a phenomenon of ecocriticism that its timeliness is ever more apparent, more insistent, and the scales involved (climate, Earth, biodiversity, humanity) arguably lend it a more "global" urgency beyond that associated with other literary critical discourses. This sense in which the field is increasingly "of the moment" comes down to the way in which it is always rooted in the ecological urgencies of now. Ecocriticism's rapidly growing popularity and diversifying scope parallel the exponential escalation of global environmental crises. Present and future threats haunt our explorations of the Middle Ages, propel us into ecologically uncertain futures even as we fix on the long past as our point of study. For ecocritics who study past cultures and literatures, this disjunct in chronology is not an obstacle. It is, rather, a powerfully illuminating and revisionary aspect of the ecocritical mode which has opened up exciting new avenues of enquiry that transcend traditional borders or categorizations.

MIP: How did the journal start? What were your goals or hopes for it when you started it?
MW: The journal started because, despite the popularity of ecocritical approaches to medieval literature and culture, there has not, until now, been one venue dedicated to environmental interests per se in medieval studies. One of our ambitions is for the journal to reveal and realize the great potential for ecocriticisms to be highly interdisciplinary and intersectional, encouraging ecocritical analyses from a wide range of different arts and humanities fields.

MIP: What kinds of studies have been published by the journal already? Can you give us a sneak peek into the upcoming second issue?
MW: So far essays published have been literary studies, which is pretty conventional. Issue 2 is non-themed and publishes unsolicited submitted essays that range in topic from monastic "sinscapes" to the latest Gawain film and Lydgate's Saint Edmund. We're pleased that there is a more diverse representation of fields and approaches in this second issue, such as "ecocinema" and the perspectives of modern landscape photography.

MIP: Do you have any thematic issues in the works? If a scholar wants to propose a thematic issue, how would they do that?
MW: Yes, we already have two lined up, for 2024 and 2025: on Trans Natures, and Plant Temporalities. Scholars who would like to propose thematic issues are very welcome to contact us to discuss their ideas.

MIP: The first issue was on "Medieval Weathers." What did you find particularly compelling about medieval weather? Did you learn anything especially interesting from the articles in that issue? Did you notice any themes or patterns among the articles?
MW: I edited the first issue (published last year; my introduction is open access) on the topic of weather because this had been fairly under-represented at the time in medieval studies. There has certainly not been a large-scale ecocritical study yet on weather in the Middle Ages, so issue 1 was aimed at a move towards something like that. One thing that occurred to me a lot when reading and editing the essays included in that issue was the various ways in which medieval thinkers and writers repeatedly addressed and involved weather in ways which didn't seem to address meteorological phenomena as something literal and physical in itself, but which could actually never avoid weather being exactly those things–literal and physical–because weather is everything and everywhere: it can't be avoided by any of us, in very real terms. I was repeatedly reminded of how weather was urgently and pervasively significant to pretty much all spheres of medieval life, whether that was physicians and reeves consulting prognostications, laborers predicting weather according to experiential knowledge and folklore rhymes, or intellectuals consulting the Zodiac and plotting the intricate, very real, influences of stars and planets manifest in weathers upon the human body and fates.

MIP: What brought you to the field of medieval ecocritical studies, personally? What do you find particularly enjoyable, interesting or significant about it?
MW: My interest in the natural world, particularly birds, brought me to ecocriticism. I had decided to do a Ph.D. in 2010 on birds in medieval poetry (which become my book: Birds in Medieval English Poetry), and it just so happened at this time that the first ecocritical studies in the field were appearing, so it all coincided very nicely to provide me with a theoretical framework that made my own work highly topical.

Check out Michael's website, The Compleat Birder, to find out more about his work on birds, nature and culture.

Find out more about Medieval Ecocriticisms and check out the journal's ScholarWorks page, where you can also submit an article for review or subscribe!