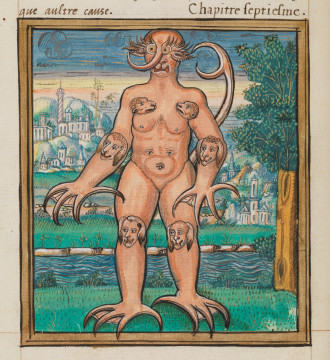 Monsters, Prodigies, and Demons: Medieval and Early Modern Constructions of Alterity is dedicated to the study of monstrosity and alterity in the medieval and early modern world, and to the investigation of cultural constructions of otherness, abnormality and difference from a wide range of perspectives.

To submit a proposal or completed manuscript to be considered for publication by Medieval Institute Publications or to learn more about the series, contact Ilse Schweitzer VanDonkelaar, acquisitions editor for the series.

The series board comprises: 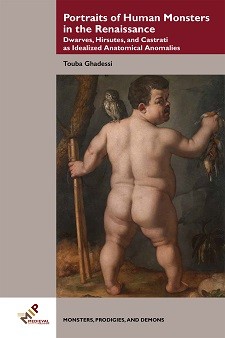 Portraits of Human Monsters in the Renaissance: Dwarves, Hirsutes, and Castrati as Idealized Anatomical Anomalies

At the center of this interdisciplinary study are court monsters - dwarves, hirsutes, and misshapen individuals - who, by their very presence, altered Renaissance ethics vis-à-vis anatomical difference, social virtues, and scientific knowledge. The study traces how these monsters evolved from objects of curiosity, to scientific cases, to legally independent beings. The works examined here point to the intricate cultural, religious, ethical, and scientific perceptions of monstrous individuals who were fixtures in contemporary courts.

Buy Portraits of Human Monsters in the Renaissance from ISD

Raising the Dead: The Meaning and Purpose of Restless Corpses in Medieval English Narratives

A number of medieval English narratives, ranging from the 11th to the 15th century, contain stories about walking dead—corpses that climb out of their graves to the wonder and terror of the living. Their activities vary wildly: some restless cadavers attempt to seduce living men or women; others knead bread, spread pestilence, eat human flesh, poke out eyes, communicate with monarchs, and knock on the doors of the living. Some wandering corpses acquire additional powers such as turning invisible or assuming guises of dogs and bears, while others fail to maintain coherent speech. This book deconstructs the medieval image of a restless corpse in an endeavor to find rational explanations for medieval stories of the walking dead.