The Medieval German Texts in Bilingual Editions series is designed for classroom use in German and medieval studies, as well as for the more advanced scholars in fields adjacent to that of German literature: the historian, Latinist, theologian or romanist who wishes to extend her or his reading and research across those largely artificial borders that still divide medievalists unnecessarily.

Proposals or completed manuscripts to be considered for publication by Medieval Institute Publications should be sent to Tyler Cloherty, acquisitions editor for the series, and the series editor, Claire Taylor Jones, University of Notre Dame. 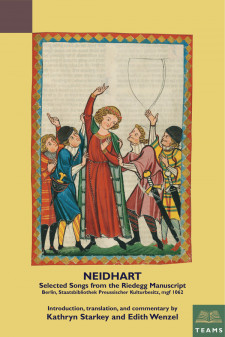 Introduction, translation, and commentary by Kathryn Starkey and Edith Wenzel

A translation of and commentary on selected songs attributed to the satirical Middle High German poet Neidhart from the thirteenth-century Riedegg manuscript. 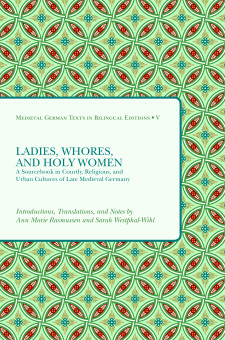 This sourcebook presents editions and translations of seven fourteenth- and fifteenth-century texts that advance our understanding of gender, sexuality and class in the late medieval German-speaking world. Three of the translated texts are fiction. Additionally, there is a religious treatise, a religious legend, an inventory of books and a legal document. While each of these texts is instructive in and of itself, they gain in complexity when brought into dialogue with one another. 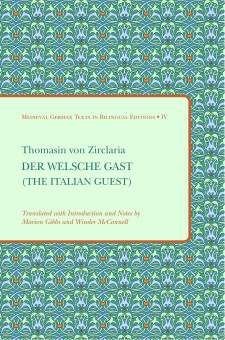 This work betrays the heavy hand of the clerical moralist who moves from providing the younger members of his audience with a primer for proper social etiquette in his early verses to a meticulous analysis of what he clearly viewed as the appropriate ethical code for the nobility of his time, often presented against the backdrop of thundering condemnations of the state of contemporary affairs. 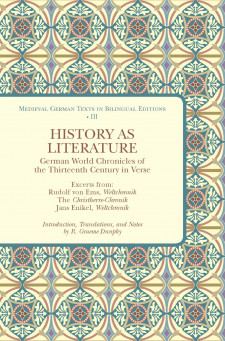 History as Literature: German World Chronicles of the Thirteenth Century in Verse

Buy History as Literature at ISD 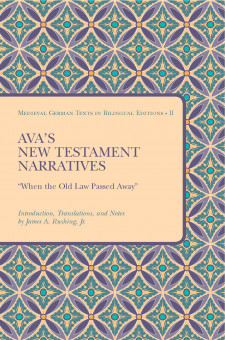 Ava's New Testament Narratives: "When the Old Law Passed Away"

Introduction, translations and notes by James A. Rushing, Jr.

Ava is the first woman whose name we know who wrote in German. She wrote her poem—or poems—on the lives of John the Baptist and Jesus Christ sometime early in the twelfth century, no later than 1127. 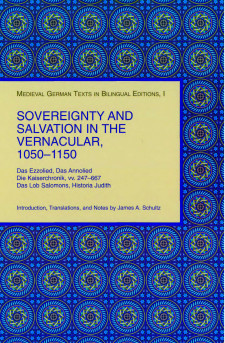 Sovereignty and Salvation in the Vernacular, 1050–1150

Introduction, translations and notes by James A. Schultz

These texts will be of interest because they represent a kind of writing – at the intersection of ecclesiastical and secular power, drawing on the whole range of medieval Latin learning, yet written in vernacular verse – that is not found elsewhere in the European Middle Ages. In addition, they may be of use in teaching since, although relatively short, they illustrate a great number of characteristic medieval ways of writing and can be linked to a number of quite remarkable historical figures.

Buy Sovereignty and Salvation in the Vernacular, 1050–1150 at ISD