Studies in Iconography: Themes and Variations

"Frame for a Portable Reliquary Icon," 1347. Cleveland, The Cleveland Museum of Art, gift of Ruth Blumka in memory of Leopold Blumka, 1978.26. Public domain.

Studies in Iconography: Themes and Variations is a companion series to the successful journal "Studies in Iconography." Volumes focus on the visual culture of the period before 1600. Submissions are welcomed for monographs or tightly-conceived essay collections that take a cross-disciplinary or interdisciplinary approach to their subjects or that examine theories and methods of iconographic analysis and histories of representation from a critical perspective.

Proposals or completed manuscripts to be considered for publication by Medieval Institute Publications should be sent to Tyler Cloherty, the acquisitions editor for the series, or to the series editors. The series' Editorial Board is hosted by the Index of Medieval Art at Princeton University.

The series' Editorial Board comprises:

This volume offers fresh approaches to the material and the subject matter of late medieval English alabaster sculptures, bringing them into dialogue with twenty-first-century scholarship on pre-modern visual culture. The book comprises an introduction by Brantley and Perkinson; eight essays by scholars trained in the history of medieval art and/or medieval English literature, including Brantley and Perkinson; and an afterword by Paul Binski.

The Locus of Meaning in Medieval Art

This book addresses the status and relevance of iconography and iconology in the post-Panofskian study of medieval art. These disciplines remain crucial for the continued praxis in the discipline. The essays within this collection demonstrate the continued usefulness of iconography and iconology as analytical strategies, and propose alternative approaches to investigating the meaning of medieval art.

Buy The Locus of Meaning in Medieval Art at De Gruyter

St. Albans and the Markyate Psalter

This collection offers bold new readings of the images, composition, reception, and contexts of the beautiful, twelfth-century Markyate Psalter.

Buy St. Albans and the Markyate Psalter at ISD 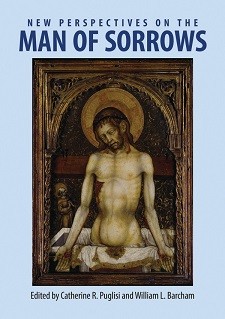 New Perspectives on the Man of Sorrows

This volume is a collection of ten essays investigating an assortment of issues and problems raised by the Man of Sorrows, a figure charged with profound spiritual, metaphorical, and symbolic meaning that traveled across Europe, populated all the arts, and permeated numerous religious contexts as it soared in popularity in the West from the late Middle Ages into the Renaissance and beyond.

Buy New Perspectives on the Man of Sorrows at ISD