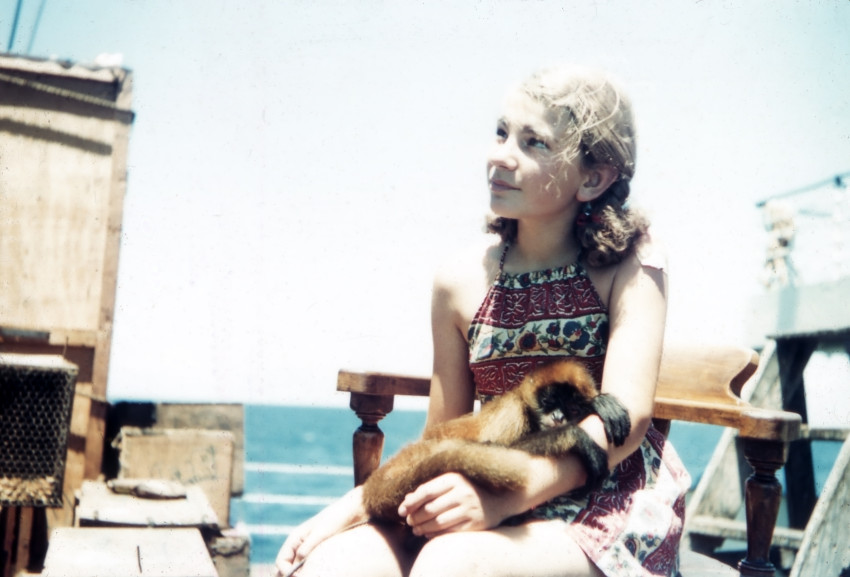 A new interactive digital narrative tells the story of Ina Juretschke, who lived in Ecuador for one year as a refugee fleeing Nazi Germany before emigrating to the United States with her family.

KALAMAZOO, Mich.—What started as dusty boxes of slides and photographs has become an interactive digital narrative documenting one family’s flight from Nazi Germany to Ecuador and life during an under-documented period in Ecuadorian history.

Dr. Ann Miles, director of the Western Michigan University Center for the Humanities and professor of anthropology, and Amy Bocko, associate professor and digital projects librarian, collaborated to tell the story of Ina Juretschke, who fled Nazi Germany with her family in 1939 and lived in Ecuador for a year while waiting to emigrate to the United States. Juretschke currently lives in Kalamazoo.

Ina’s father, Alfred, was an avid hobbyist photographer and thoroughly documented their journey. In 2018, the Juretschke family approached Miles for her help in sending the family’s boxes of slides and photographs to Ecuador.

“I’ve worked in Ecuador for over 30 years, so I’ve seen a lot of changes over that period,” Miles says. “They were remarkable photographs of a very different place and time.”

Upon reviewing the artifacts and hearing Juretschke’s story, Miles found significant potential for a project to document and tell the story of their journey from Germany to Ecuador. “I had these two very remarkable things: notable artifacts and photographs and a compelling family story.”

“[Ina] is so full of life. She's so full of optimism toward the world and her experiences in them. I just really enjoyed getting to know her,” Miles says.

Bocko worked with library staff and students to digitize the artifacts and built the archive in Scaler, while Miles conducted interviews with Juretschke and extensive research to add more context to her story.

“I tried to put together some history behind every part of Ina’s journey, starting in Germany with the free thinkers through leaving [Ecuador] to give the deeper historical context,” says Miles.

“One of the things that made her family so unique, I think, is that while they were Jewish by heritage, when they came to Ecuador, they didn't fit immediately into the Jewish community because they were Freethinkers,” Miles says. “They were culturally German and Jewish but not religious. They had this in-between kind of life where they didn't fit immediately into the Jewish refugee community.”

The Freethinkers were one of several secularist movements in Germany and encouraged “thinking for oneself and not adhering to the ways that authorities, religious or State, would tell one to think,” according to Miles’ research.

“[Ina] was different in Germany because she was Jewish, but a Freethinker. Different in Ecuador, because she was a white person, a little blonde girl. And then she comes to the U.S., and she's a German girl at a time when being German wasn't a good thing. Trying to capture that sense of her life, and her curiosity for it, was one of my goals,” Miles says.

“From a scholarly and academic stance, it’s very fascinating and depicts a very specific time in history—something that was also under-documented is Ecuador in the late 1930s,” says Bocko. “But it was also a really important piece of history for their family.”

Ina’s daughter, Julie Sokolow, was also involved in the project, helping not only to coordinate the recordings with her mother but providing insight into her family’s history.

“This isn't just an academic project. This is important family history. This is something that's tangible for their family that now they can share,” Bocko said. “I thought it was a nice kind of moment that this mother and daughter were both involved in preserving this family history.”

Now that the digital project is complete, Miles’ goal is to bring the slides to Ecuador and deliver them to a historian colleague, so they are “repatriated” to their place of origin.

This project may also serve as inspiration for students and scholars to create digital humanities projects.  Bocko has helped the Center for the Humanities by providing training and sharing her expertise on the potential for scholarship in digital humanities.

“The Center for the Humanities is incredibly grateful and thankful that we have Amy. She is really going to help us explore the possibilities of digital humanities,” Miles said. “We’re now at the next step of training people to learn the basics so that they can start projects of their own.”

View “A Girl’s Journey to Ecuador” and learn more about digital humanities services from the University Libraries.