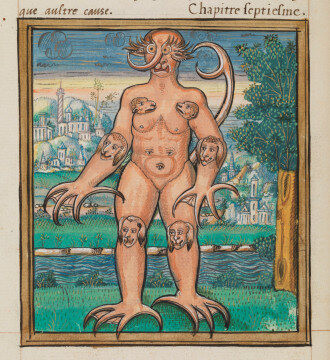 In many European cultures, this is the time when the veil between this world and the other was at its thinnest—the time when something from the other side just might cross over. For centuries, people protected the community with bonfires at crossroads, costumes, (turnip!) jack-o'-lanterns, and offerings of food and drink. In any case, action was required. The other side demanded a response.

For us—Melissa Ridley Elmes (Lindenwood University), Marcus Hensel (Bethany College, Kansas), and Juanita Feros Ruys (University of Sydney)—the series editors of Monsters, Prodigies, and Demons: Medieval and Early Modern Constructions of Alterity, every day is Halloween. We are all interested in the “other side,” whatever that may be, from the Japanese Yomi no kuni to the Sufi Barzakh, from automatons to Martin Luther’s “mooncalf.” 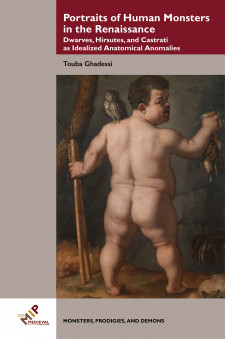 The premise of this series is that difference drives the cultural creation of the demonic, the monstrous, and the prodigious. For instance, the first book in the series—Touba Ghadessi’s Portraits of Human Monsters in the Renaissance: Dwarves, Hirsutes, and Castrati as Idealized Anatomical Anomalies—takes dwarves, hirsutes, and misshapen individuals as its subjects. It examines court monsters who, by their very presence, altered Renaissance ethics vis-à-vis anatomical difference, social virtues, and scientific knowledge, tracing how these monsters evolved from objects of curiosity, to scientific cases, to legally independent beings. We look forward to a future filled with revenants, sirens, demons, and more.

One of our major interests is expanding the geographical scope of the series. We would love to see the prodigious births of the Malinke Sunjata Kieta and the Irish Cú Chulainn examined—or maybe gender-bending animals in Continental romances. (We can’t decide).

But we know that difference does not always appear at the map’s “edges” and are also interested in works that explore alterity within the confines of the community. The abject, the out-of-place or hybrid individual in a contact zone, the third-term supplement in a heteronormative space—all of these are areas of analysis that still have much to teach us. Whether it be a cross-cultural exploration of ogres or an in-depth study of female trolls in Norse literature, the series is devoted to the other side of that veil and whatever crosses over. So when you light that jack-o'-lantern or hold your breath as you pass that graveyard, remember that we are thinking about what you are trying to keep at bay.

Monsters, Prodigies, and Demons: Medieval and Early Modern Constructions of Alterity is dedicated to the study of monstrosity and alterity in the medieval and early modern world, and to the investigation of cultural constructions of otherness, abnormality and difference from a wide range of perspectives.

Find out more about the Monsters, Prodigies, and Demons series here. To submit a proposal or completed manuscript to be considered for publication by Medieval Institute Publications or to learn more about the series, contact Ilse Schweitzer VanDonkelaar, acquisitions editor for the series.

When you subscribe to our newsletter, you'll receive monthly updates on new titles; special offers and conference discounts; features about the people who make MIP work, including our authors, series board members, and acquisitions editors; and more. You'll also have the chance to enter monthly raffles for free books! You'll be automatically entered into your first raffle as soon as you sign up.