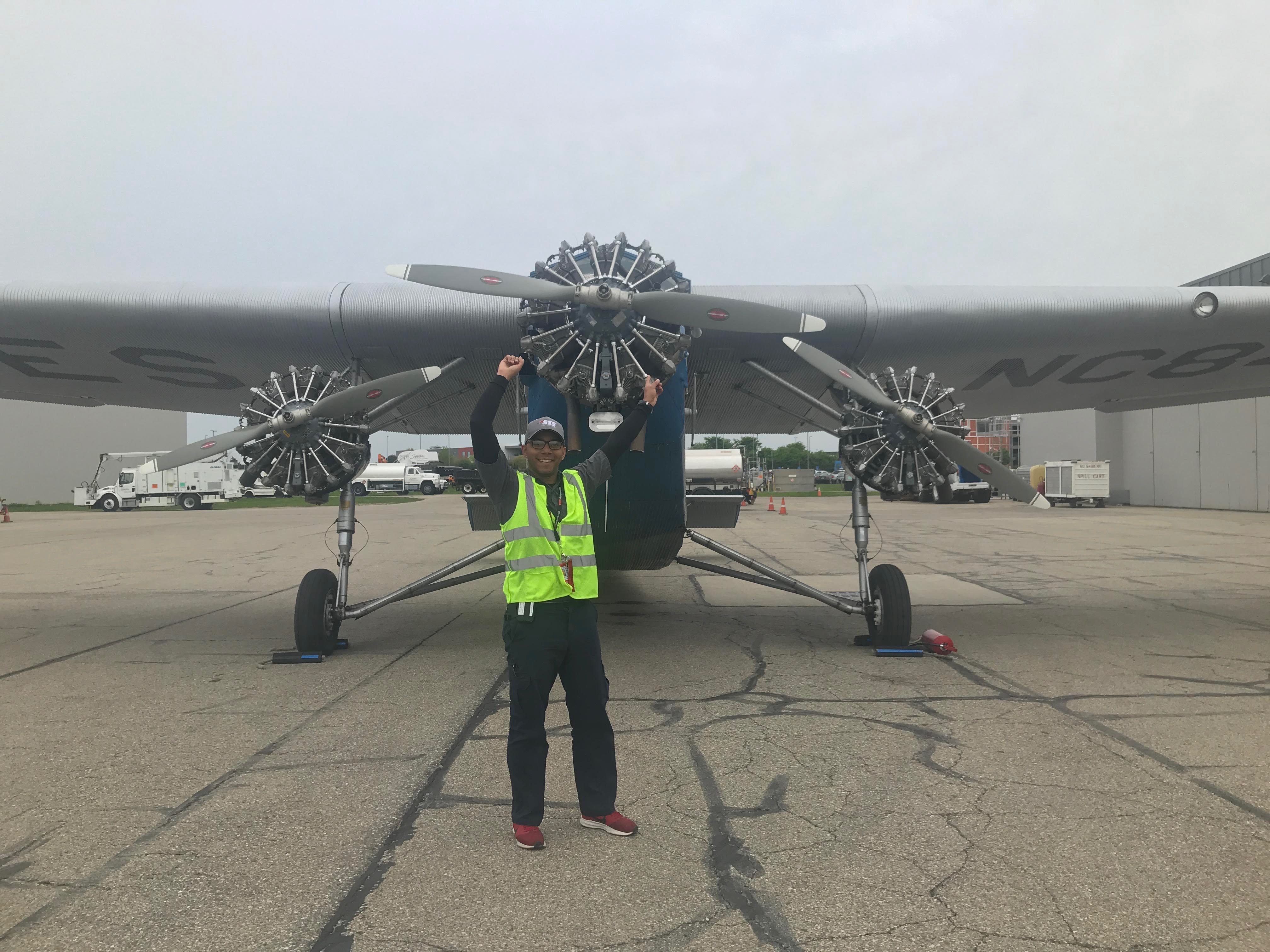 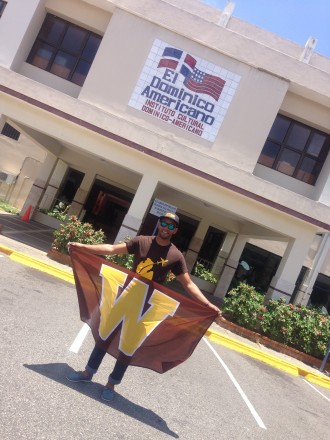 For decades, The Dominican Republic has been exporting to the United States scores of talented baseball players with the ability to send white spheroids on long, majestic flights.

Thanks to the Western Michigan University College of Aviation, Miguel Del Rosario, whose former home is the capital city of Santo Domingo, was able to polish and train his skills so that people can enjoy safe and secure flights all over the world.

"After a long-term interest in automotive engineering," Del Rosario says about his conversion, "aviation moved to the forefront, helped by some advice from a close member of the family and a little research on my own.  The latter got me in contact with a student ambassador for the College of Aviation and the rest is history."  The history now includes a degree in aviation maintenance technology with a minor in sales and marketing.The 2017 alumnus of the college is now a line-maintenance technician for STS Aviation Group, a global firm headquartered in Jensen Beach, FL.  Early on as a high school student at the Colegio Dominico Americano, his sights were more attuned to the technology that pushed machines along the ground than the scientific knowledge it takes to conquer gravity.

It didn't take much of a sales pitch for Del Rosario to cast his lot with aviation. "It is highly technical, which matched my interest in that kind of innovation," he says. "It brings in the best of all worlds."

Because he was lured to Western by one of its student ambassadors, one of his giveback activities on the Western campus was to become one.  Along the way to broaden his resume, he did some sales and marketing for American Airplane Exchange.  As well as some sales, marketing and client-relations work at Piston Fly. At the college's W. K. Kellogg Airport base of operations in Battle Creek, he was introduced to aircraft maintenance, using that experience to perform similar chores at Pentastar Aviation -- all of which prepped him for his current employment. 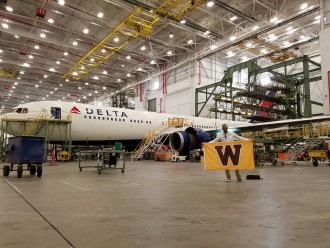 Del Rosario acknowledges that it was not smooth flying all the way in his career choice, even though he completed work on his degree in the traditional four years.  He says he disconnected himself from the aviation curriculum for about a year to sample what web development and design might hold for him. Del Rosario actually did a bit of that for an enterprise.  Maybe there was something of a future in it for him, he concluded, but nothing like the destinations ahead of him in aviation.  Yet that little detour still turned beneficial since it allowed him to stick a minor on his degree.

In addition to Bronco football games and all of the social activities tied to them, Del Rosario's fondest memories of his days at Western are the lasting connections to faculty and staff members, some of which were formed while representing the College of Aviation at the fabled and annual Experimental Aircraft Association (EAA) gathering in Oshkosh, Wis., and at other events in the Midwest.

Because of the college personnel's sincere interest in him, Del Rosario believes he graduated "on time."  Their mentorship kept him on a path of responsibility, a trait that comes in handy these days in any field of endeavor, and helped Del Rosario book his first full-time job in the United States. STS Aviation Group is not chopped liver.  With bases of operations throughout the United States, in Brazil, the United Kingdom, Turkey, Dubai, Puerto Rico, Shanghai and Singapore, it is a global force in the aviation industry. It is involved in airplane-component sales and distribution, workforce management, aircraft engineering services, line maintenance, and aircraft repair and modification. STS Aviation Group's locations in Michigan are in the Detroit area and Oscoda. 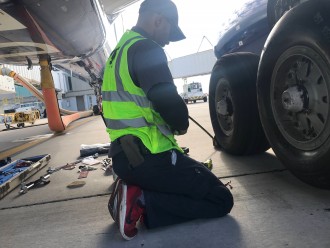 What also stays with him in his WMU memory book is a negative that turned into a positive. While Del Rosario admits he didn't like the teaching style in one course and questioned the effectiveness of that particular strategy at the time, he finds that the course's content is "extremely relevant" to successfully performing his duties for STS Aviation. Those duties, he says, are "never boring.  They are challenging and diverse. The days on the job never seem to be the same."

Which is why he is so effusive about "turning on" the coming generations when it comes to aviation and -- in particular -- what the WMU College of Aviation has to offer.

"Every day," Del Rosario says, "I see firsthand the need for a skilled and highly educated workforce in the field.  The demand for talented personnel is skyrocketing, but the supply is not meeting the demand.  In fact, it seems to be declining.  There must be more awareness generated that aviation offers an exciting career, one that is well compensated financially and one that attracts people with a broad range of interests."

That's the message as a College of Aviation alumnus that he delivers at every opportunity.  "Every chance that I have to interact with an individual or corporation," he says, "I take pride in expressing where I was trained and educated.  And it always seems to be noted and appreciated." 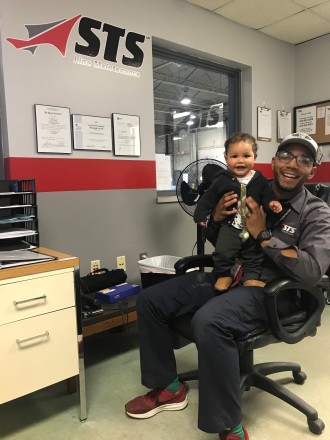 While his "down-the-line" goal is to head his own fixed-base operation, he sees for himself a role as an educator in his field.  He holds a passion to pass on what he has been taught and what he has learned to future students charting a course in aviation.

"I strongly believe that, except for what we have learned and experienced, we take basically nothing when we leave," Del Rosario says. "Giving back is what we should do in the form of financial assistance, mentorship, and advice.  Those are small -- but important -- things we can do to show appreciation to those who came before us and assist the upcoming generations waiting in the wings.  Showing them the value of giving back is a wonderful legacy."He says his stint as a College of Aviation ambassador has paid dividends through the connection he made, many of which are still intact today.  He calls that experience "nothing but fulfilling."  He's proud of being a gold donor over the last three years for the Air Race Classic that helps promote the value and status of women in aviation. More locally, he's also sponsored the various EAA Young Eagle flights in Allegan County and provided the necessary materials to hold the SkillsUSA competition for his future peers each year at Western.

To Del Rosario, the legacy of aviation is far from determined.  "I am eager to see -- and be a part of -- how the industry will continue to change with the arrival of more contemporary business models tailored around the new and evolving technologies.  I'm looking forward to how all of this intersects with the College of Aviation's new building and expansions on the horizon."

The WMU College of Aviation is looking forward to booking that flight as well.

Check out Miguel's Video Blog - A Day in the Life of an Aviation Maintenance Technician! 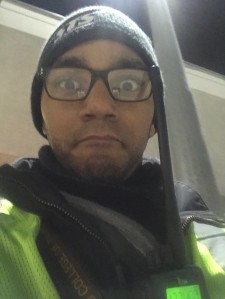