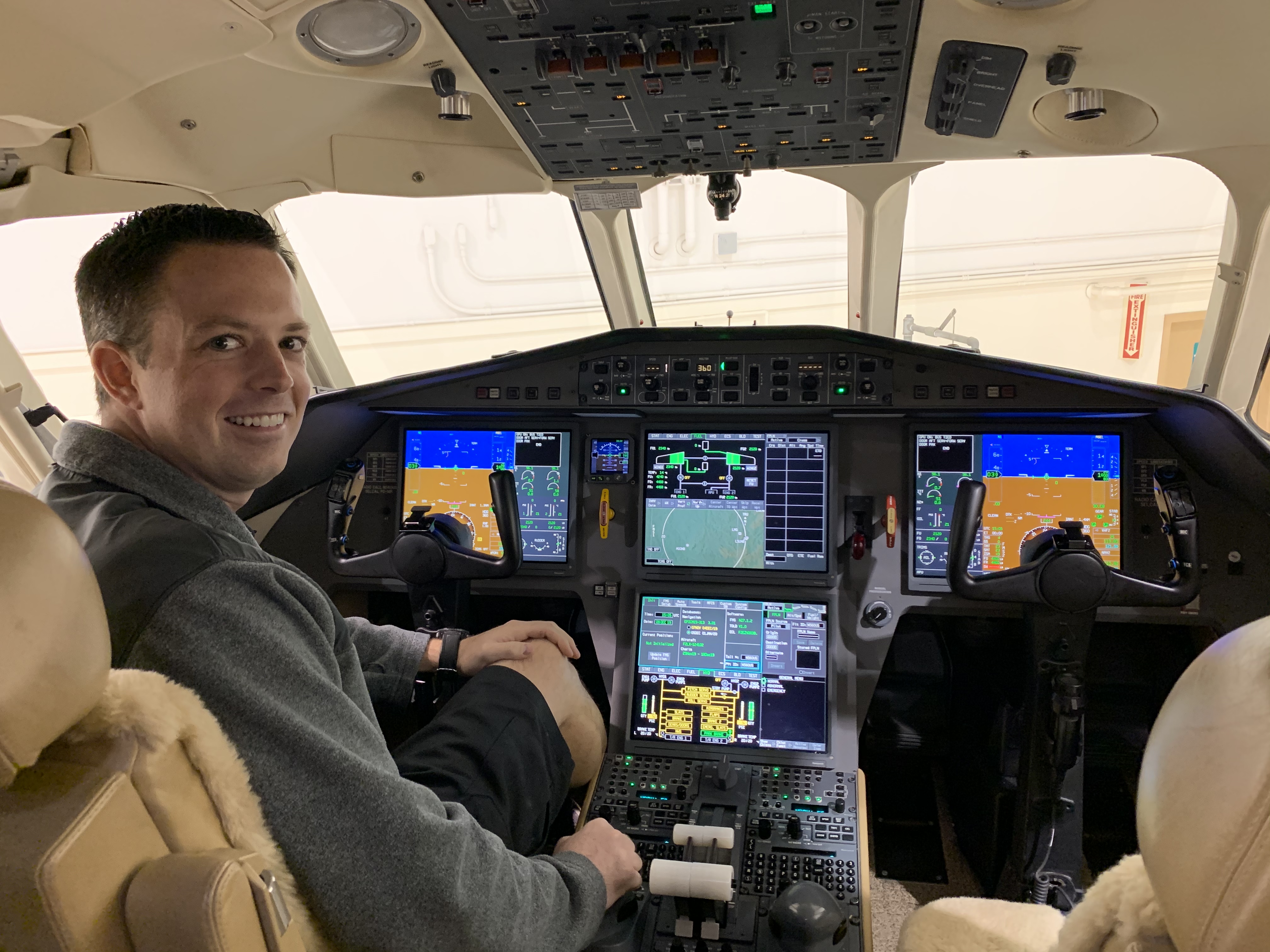 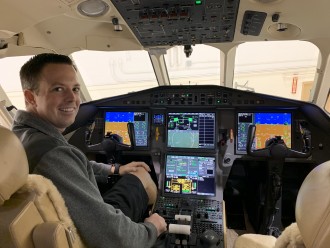 Mitchell Patterson first believed he had the right stuff for a career involving aircraft when, as a young fellow, he visited the National Naval Aviation Museum in Pensacola, Fla.

Years later, after a hitch in the U. S. Navy that ended in 2014, Patterson actually crossed contrails with a member of "The Right Stuff" corps -- Eileen Collins, who earlier in her career as a veteran test pilot and colonel in the U. S. Air force, had been selected to join the ranks of NASA as an astronaut in 1990. More about her later.

What Patterson saw at the museum -- World War I biplanes, World War II Pacific Theater warbirds, relics from the pivotal Battle of Midway, exhibits that take visitors to historic places and events, restored planes used to train for carrier landings that had been brought up from the depths of Lake Michigan, the precision flying of The Blue Angels -- all fueled his imagination about aviation.

Following his 2009 graduation from Kalamazoo Christian High School, Patterson didn't have very far to soar to realize his goal. By 2018, he had completed degree work at the Western Michigan University College of Aviation with a major in aviation maintenance technology and a minor in business management. He prepped for his current post by working at Duncan Aviation as an airframe technician, first as a summer intern, then part-time as he completed his degree, and even full-time upon graduation.

That quality of a resume pointed Patterson to United Services Automobile Association (USAA), a Fortune 500 financial-services firm based in San Antonio, Texas, that caters to military families. He is an aviation maintenance technician in USAA's corporate flight department. He and his wife -- plus dog -- now call The Alamo City home. 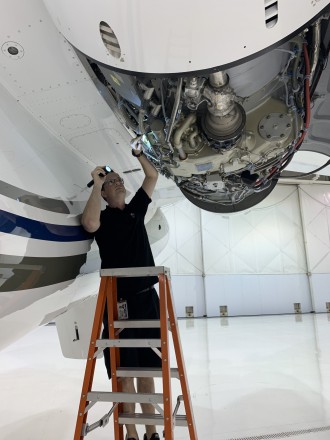 He came in contact with Collins when she retired from NASA to join the governing board of USAA, bringing with her some historic credentials -- first female to pilot a Space Shuttle mission and first of her gender to command one of those adventures. She guided the rendezvous of Shuttle Discovery with Mir, the Russian space station, and was in charge of a shuttle's resupply of the International Space Station. She was "up there" four times in all.

"I met her during a work function." Patterson recalls. "It was an honor to talk with her. I was always interested in aviation as a kid, especially in military aircraft. That visit to the museum in Florida really opened my eyes to the kind of career I wanted." Meeting Collins reinforced the belief he made the right decision.

"I love my company and the people I work with," Patterson says. "USAA is one of the best employers out there because it always puts what is best for its members and employers first. It cares for the military community and military families. Being a veteran myself, I am proud to be part of that.

"The people who I work with -- 15 in the flight department -- make up a tight-knit group," he says. "In effect, we are a big family and often do activities together outside of work."

The department needs that tightness because the duties can be stressful. Be ready to do something not planned for at the drop of a hat. "There are constantly changing flight schedules," he says, "while always making certain USAA airplanes are ready to fly at all times. If a plane breaks down away from the home base, we either have to coordinate the repairs or fly out to where it is to fix the problem. It is fun, but you have to be ready at a moment's notice if there is a problem."

Patterson was schooled for a lot of these challenges in his favorite class at the College of Aviation -- the principles of troubleshooting. "We had free rein to use tools," he says, "and to figure out issues on our own with little to no guidance from the instructor. We were given a problem and then, using our knowledge and resources, to come up with a solution."

Faculty specialist Jeremy Hierholzer draws Patterson's praise as an instructor. "He always kept his classes interesting and fun," he says. "He wasn't afraid to make me think outside the box. He wanted me to not only know the material, but how to apply it to real issues that I would face out in the field. I like how he always challenged me and would point me in the right direction to make certain I was set up for success when I graduated. I owe Jeremy a big thank-you because he would talk to me when I was frustrated with school. He'd give me advice in life as well."

Among his favorite memories were the front-row seats he enjoyed for the "awesome" aviation performances that were part of the Battle Creek Field of Flight Air Show and Balloon Festival. "The warbirds would park in our hangers," Patterson recalls, "and we could get up close and personal with them." He was also fond off competing in the SkillsUSA contest on a state level, earning a second place in the aircraft-maintenance phase of the competition. 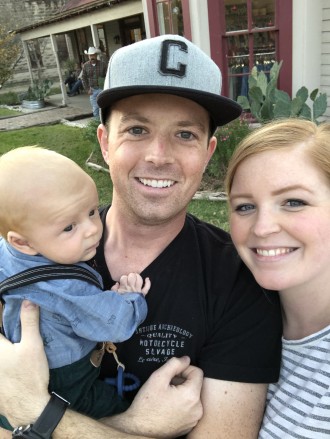 He needed a break and some fun during the summer of 2018. Patterson was taking a complete load of classes and also working on a full-time basis. "Classes lasted all day and for a majority of the week," he says. "It was stressful because of the academics and then having the energy to do a job later. It was my wife who kept me motivated. She helped me realize that I was one day closer to being done."

Recently, Patterson and his wife just added another member to their family – a baby boy named Beckham!  While this new life is creating all sorts of new, fun distractions, Patterson is still not done dreaming about his career’s future. In addition to being the world’s best father, he also has his sights set on becoming a director of maintenance for a corporate flight department responsible for all operations and aircraft TLC.

For those who want to follow in his flight path, his advice is "to get as much experience in the field before graduation. Internships and scholarships are your best friends. They will help you get a foot in the door and give you a leg up on others.

"Even though the scholarship forms seem long and might take you hours to complete," he stresses, "the payoff could be huge. The National Business Aviation Association (NBAA) and the Association for Women in Aircraft Maintenance (AWAM) have awesome scholarships, which will jump-start your career."

Those, plus the College of Aviation and what it stands for, "helped set me up for success," the Kalamazoo native says. "Its awesome instructors expanded my knowledge base immensely and provided me with hands-on experience, all of which connected me to future employers."