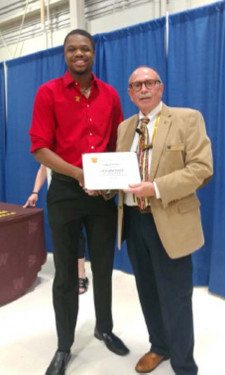 Christopher Myrick at his 2019 College of Aviation Wings Ceremony with Capt. Dave Powell

Christopher Myrick can offer salient advice to young folks who bury their faces in a video game or cell phone when on a family vacation by car.  They might be missing some valued and career-shaping experiences.  Just ask the 2014 graduate of Lincoln High School in Ypsilanti, Mich.  "Growing up," Myrick says, "I would constantly be driven past the Detroit metro airport to see my grandmother in Detroit.  I remember always looking up and seeing the planes fly over (interstate highway) I-94 to land.  They were so big and it always fascinated me."

Request College of Aviation Info Not too soon after that, Myrick came to realize that "one of the best aviation schools in the country" -- maybe in the world -- was only a relatively short drive westerly on that same highway -- the Western Michigan University College of Aviation. 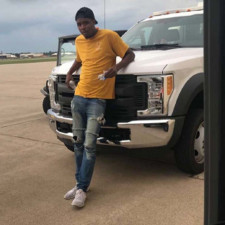 Myrick working line services for the College of Aviation

And relatively not too much later -- five years to be exact -- he had his degree in aviation maintenance technology, plus the resume-padding experience of working as a "line tech/fueler" to keep the college's aircraft fleet in the sky and also interning as a maintenance technician for one of Duncan Aviation's operation hubs near the College of Aviation at the Battle Creek Executive Airport at Kellogg Field.    That's also where he experienced the Battle Creek Field of Flight Air Show and Balloon Festival.  One of its popular attractions are the U.S. military's precision-flight teams that perform there.  "My favorite memory of WMU is being up close and personal when the air show came to the airport," he says. "I was working 'line' so I was able to get up-close to the aircraft coming in."  With the degree in his suitcase, Myrick headed south to Lafayette, Ind., and a full-time job at one of GE Aviation's bases.  Some folks may not realize that General Electric's connection to aviation dates back to World War I and includes the milestone of developing the nation's first jet engine.  "At GE," Myrick says, "I started to learn the basics of the industry.  It's where I really started to use the technical skills I learned at Western."

Changing a wire harness at Flightstar on an ERJ145

Specifically what he learned from instructor Jeremy Hierholzer and from his favorite class -- engine overhaul.  "That's because we were taking an engine completely apart and putting it back together.  It was the first time we could apply what we had learned in prior classes.  Jeremy was very easy to understand and just a fun instructor.  None of his classes was boring."  Next stop was Flightstar Aviation's fixed-base and charter-flight operation at Savoy, Ill., which is located at the Champaign-Urbana airport.  Nearby is the main campus of the University of Illinois.  Flightstar has a contract to perform overnight line maintenance for Envoy Air, the regional airline headquartered in Irving, Texas.  "I was there for a year and a half and learned even more about the industry," Myrick says.  "I really got to sharpen my skills and was exposed to a lot of new techniques.  All of the acquired skills and knowledge from those two jobs prepared me for my current duties as an aircraft maintenance technician for Delta Airlines" at its headquarters in Atlanta, Ga.  "The best thing about working at Delta," Myrick says, "is the opportunity for advancement and for enlightenment.  There's always something new to learn everyday I come in.  More than likely there will be the chance of doing something new.  There is great satisfaction in working on such big planes and working for the best airline in the world.  My immediate plan is to continue working as a mechanic -- which involves keeping up to date on the fast-moving world of aviation maintenance -- while moving toward getting my private, instrument and multi-engine licenses.  Someday I want to own my own small plane."

If youngsters don't want to take his advice about putting down the video game and looking out the car window, Myrick does have some other counsel for his peers now enrolled in Western's aviation-maintenance program.  "It's never too early to start looking into where you want to be after graduation," he says.  "The more persistent you are with research early, the more successful you will be once that time comes to find a job after school.  Please take advantage of the college's 'career outlook day' at the end of the year, plus the visits to campus by potential employers.  Employers are looking for people.  Don't be afraid to apply for jobs that you think you are not qualified for.  You never know."  The comparable is this -- when putting in golf, never up, never in -- meaning always have the putt go past the hole at least.  And finally, three more words of advice aimed at those prospects who are on the brink of taking their oral and practical tests:  "Study.  Study.  Study."  In Myrick's world, that breeds confidence.