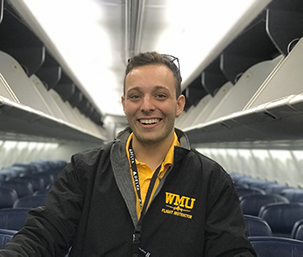 This week's Friday Feature is Ismail Abuzir, a current senior in the Aviation Flight Science program! Ismail grew up in Lockport Illinois, a small suburb of Chicago. After starting at a university in Illinois, he transferred to WMU to complete his college education and flight training. He is now finishing up his final semester and is working as a flight instructor for WMU.

Ismail was drawn to WMU mainly because of our aircraft’s state of the art technology. He thought that getting experience with the SR20 as a primary training aircraft would prepare him for his career in commercial aviation more than any other general aviation aircraft. Two and a half years later, Ismail still loves Western’s fleet and technology, but is more thankful to have such a strong support group through the College of Aviation. He has grown very close to students and faculty at the college, and credits them for helping him throughout his education and flight training. When talking about his favorite part of attending Western, he said “The staff at WMU’s CoA is definitely very dedicated to our success, and I am truly grateful for that!”

Ismail is a first generation pilot, so he has worked very hard throughout his aviation education to network within the industry and create connections. Becoming involved in multiple aviation organizations on campus, he has been able to meet many professionals and set himself up for future jobs and opportunities. Outside of WMU, Ismail became an ambassador for Republic Airways in order to get a foot in the door for his regional flying. He encourages current and future students to network as much as possible during their schooling and to push through flight training, even when it gets tough. 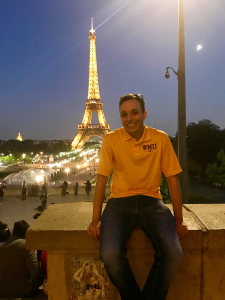 Beyond his education, Ismail is still heavily involved in aviation. In his free time, he enjoys to travel and to learn new languages. Becoming a pilot, he has set a goal for himself to travel to as many countries as he can and learn as many of their languages as possible! Out of all the places he has gone so far, his favorite is Paris. His favorite airport that he’s been to as a passenger is Atlanta because it is one of the busiest in the world, but he also loved flying into Chicago Midway as a flight student because he was flying next to major airliners in the SR20. 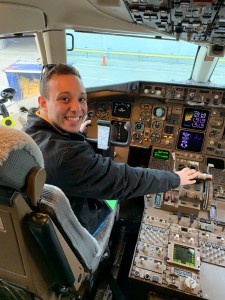 Ismail sitting in the captain's seat of a Boeing 757 aircraft.

In the future, Ismail would love to work as an airline captain on a widebody aircraft. His favorite aircraft is the A350 and he would love the opportunity to fly it one day. As a very outgoing person, he also would love to work in airline recruitment in order to meet the next generation of pilots and spread his passion of aviation!