Aviation Passion and Professionalism – Professor Lisa Whittaker Has It All 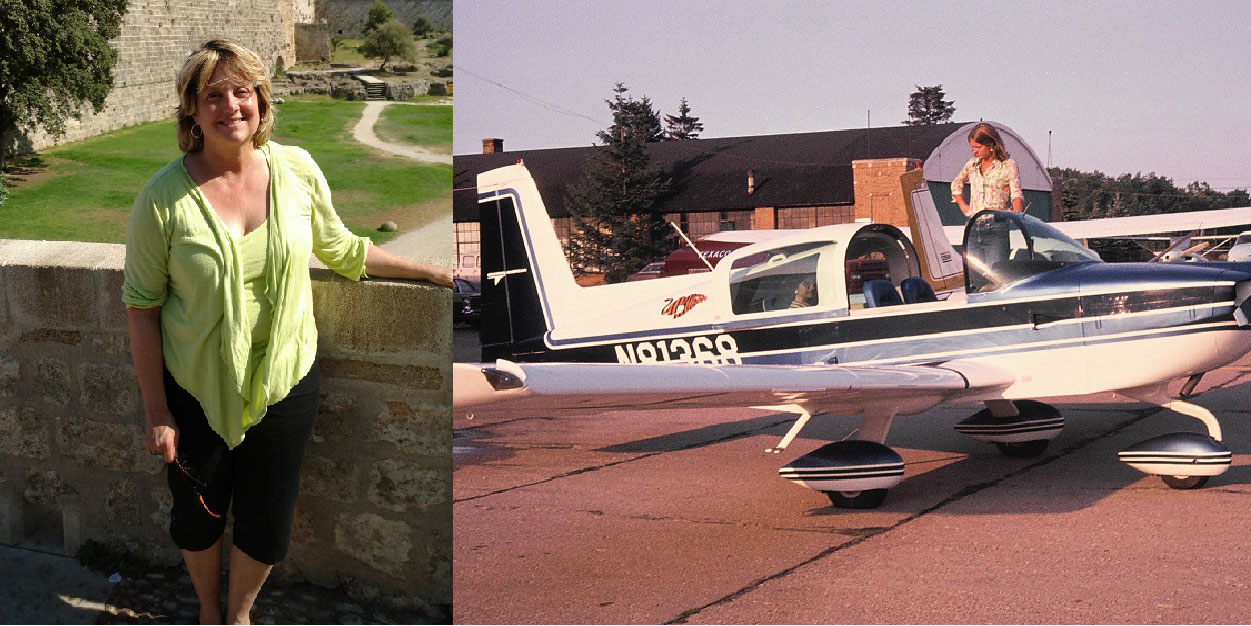 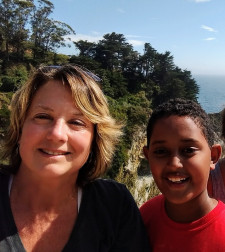 Prof. Whittaker and her son, Ben, in Big Sur

The work-experience section of Lisa Whittaker's resume would choke a paper shredder.  Which is why, as a member of the WMU College of Aviation's faculty since 2000, she has taught these courses: aviation safety (her personal favorite), airport administration and finance, introduction to aviation, aerodynamics, introduction to airports, airline flight operations, and airline administration.  Her research topics include women’s studies, STEM, maintenance engineering and safety management systems.  Fresh out of college, the Michigan native joined the Douglas Aircraft Co. on the West Coast after a year-long internship during which she rotated among the firm's marketing, technical-publication and field-service departments.  That led to a full-time job in the latter as a Douglas representative stationed at hubs for aircraft maintenance and engineering to address issues between the manufacturer and airlines flying her company's products.  Whittaker logged more than four years of Douglas Technical Field Service with Jet America Airlines and Long Beach Airport, American Airlines in Tulsa, Oklahoma., Orange County Airport and United Airlines in San Francisco. 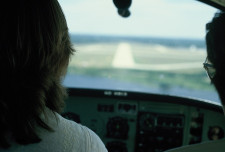 Whittaker coming in for a landing at Muskegon Airport

Switching to the customer-service unit based in Long Beach saw her focusing on the structures of MD(McDonnell-Douglas)-80, DC-8 and DC-10 airliners that were in the skies.  All that so-called "normal" routine changed on April 28, 1988, a day in the aviation industry that may not rival "9-11" but is certainly in the team photo.  That's the day, during a routine flight of Aloha Airlines, an "explosive decompression" ripped off an 18-foot section of the plane's upper fuselage.  A flight attendant was sucked out and her body was never found.  The pilots safely landed the damaged airliner, its crew and 65 passengers, some of whom were injured.  The investigation placed the blame on "metal fatigue" and an insufficient level of safety inspection of airline fleets.  "That accident was the catalyst for the Aging Aircraft Program," Whittaker says.  "I was the co-chair for the DC-10 Aging Aircraft Committee, along with American Airlines."  At the same time, she added to her resume with a short stint as a flight instructor at the Long Beach airport.  With changes in the aviation industry in the air as a new decade dawned, Whittaker would feel the turbulence. In the early 1990s, then McDonnell-Douglas reduced its work force for a variety of reasons and was eventually bought out by Boeing in 1995.  "Rather than get laid off," she says, "I chose to find work elsewhere."  "Elsewhere" was San Antonio and Fairfield Aircraft as a structural engineer. That's also where she sampled the higher-education sector of the industry at a community college with a small program in aviation.  After three years as a Texan, she transferred to Cessna Aircraft Company, Citation Division in Wichita, Kansas.  "I started in the marketing department for the sales force's technical support," Whittaker says.  "After a couple of years, I transferred back to product support for the launch of the Citation X.  My last job was as a supervisor of maintenance engineering." 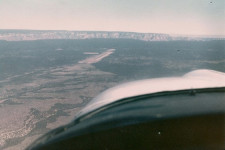 Next stop was the Kalamazoo area as an assistant professor in the College of Aviation, a connection that has been her "longest stretch in one place."  And it was something of a homecoming.  "Work experience is 'real-world' learning," Whittaker says.  "It was very challenging and interesting.  I was fortunate to have many opportunities to work with people all over the world.  Having a solid background in the industry provided me much knowledge to share within teaching and research.  These capacities required -- first and foremost -- skills in communication, and also technical knowledge, leadership and responsibility, creativity, dedication and determination, and ethical decision-making.  "I try to instill these skills for students in my teaching," she says.  "My motto is -- take the opportunity that is offered.  What is there to lose?  With a college degree, you have the ticket to learn anything."  (Those lessons seem to be sticking with her listeners.  In profiles of students and alumni being published by the College of Aviation, many rank Lisa Whittaker as their favorite instructor.)  So how did all of this get started for Whittaker, who was raised in North Muskegon, a shoreline community located just about due east of Milwaukee, Wis., across Lake Michigan. 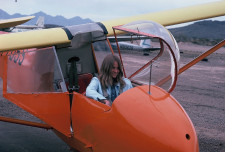 Whittaker taking to the skies in 1975

"My father wanted me to learn to fly," she says.  "I'm sure he wanted to get me involved in a constructive activity in my teen years.  He enrolled me in gliding lessons in Arizona as a 15-year-old while on a family vacation in Arizona.  Later, he encouraged -- actually insisted -- that I take flying lessons at the Muskegon airport."  While most teens were getting their training wheels on roads learning to drive, Whittaker was gallivanting above them.  "I loved handling the airplane," she recalls, "and I had my private pilot's license by the time I graduated from high school."  First step in her higher education was Kalamazoo College, her introduction to the community that she would eventually call home.  "I knew I wanted to pursue a career in aviation," she says.  Her initial glance was not what was available right down the road.  Instead, her focus was on where she first took to the skies.    Embry-Riddle Aeronautical University (ERAU) had recently established a new campus at Prescott, Ariz., and that's where Whittaker headed.  While "where" loomed as a prime reason she chose Embry-Riddle back then, these days she is one of the reasons students today choose the WMU College of Aviation.    She began her work experience at Douglas armed with a degree in aeronautical studies and management in 1981.  Whittaker added a master's in aeronautical science from the same institution in 1993.  She brings much of that to her WMU classes by taking students on trips to airports and booking industry speakers. 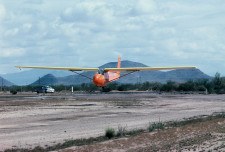 Whittaker floating her glider for a safe touchdown

"I believe that any exposure to the real world is important," she says.  "Another high point is when student groups participate in projects and present their work in class.  They are excited to share their new-found knowledge.  Being engaged in learning is the best. I hope what they learn in class encourages them to keep learning.  Life-long learning is essential for growth."    She's followed her own advice, earning another master's in 2009 -- this one in career and technical education from WMU.  And she probably absorbs a thing or two from her students' project presentations because one of the best things about being a teacher is learning from your students.  Outside of the classroom, Whittaker has joined students in their extra-curricular activities.  For six years, she was the faculty adviser for Western's Women in Aviation International chapter, taking members to national conferences and exposing them to many aspects of the aviation industry.  More recently, she and a former student, Gabriel Sullivan Langley, revived the college's chapter of the American Association of Airport Executives.  "It is now a strong and vibrant organization that offers many activities connecting students to opportunities in airport management by meeting professionals in the field," she says.  "I love the academic environment," Whittaker admits.  "University work is challenging, which is something I want and need.  Faculty members have the opportunity to choose their own research, service and teaching.  We work rather independently.  Being faculty is a privilege.  I love what I do." 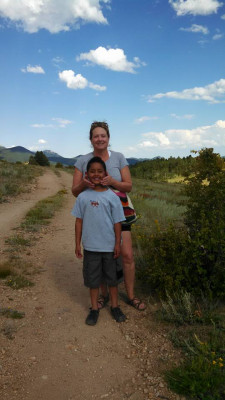 One of the things she has done is create "the Airport Management Emphasis.  This provides focused education with topics -- introduction to airports, airport safety and security, airport operations, airport planning and airport administration.  The intent is to create a certificate program for those who want to advance their careers."  And that's not all.  "African aviation is of interest, too," says Whittaker, who has published a paper about what she learned.  "I had the opportunity to travel to Ethiopia several times and learn about the growth strategy of Ethiopian Airlines.  It is a leading airline in Africa with ambitious plans. . .Opportunities abound within Africa."  Also within Whittaker's sphere of interests are:

Past trends have seen Michiganders of all ages in a "can't-wait" mode to depart the state for greener -- or warmer -- pastures.  Those trends have begun to reverse in recent years as more "prodigals" return to the only state completely within the Great Lakes Watershed. 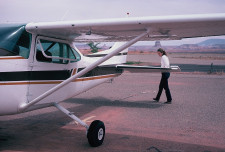 Whittaker performing a preflight on the aircraft

"Michigan is an amazing state," says the mother of a seventh-grader who has a mother, sisters, nieces and nephews with West Michigan addresses.  "I grew up a bike ride away from Lake Michigan and it was those beaches that were a major draw to come back.  But I also love being out west.  I'm torn between the lakes and the mountains."  There are no "rips" or "tears" regarding her current duties, however.  "WMU is a great place to be a student and an employee," she says.  "The people are friendly.  They care about our students and employees.  There are so many talented and intelligent people here.  Recreation activities, health care and student performances are added perks.  The campus has transformed over these past 20 years.  It is beautiful."  Be it known that professionals such as Lisa Whittaker played a role -- and still plays a role -- in all of that.