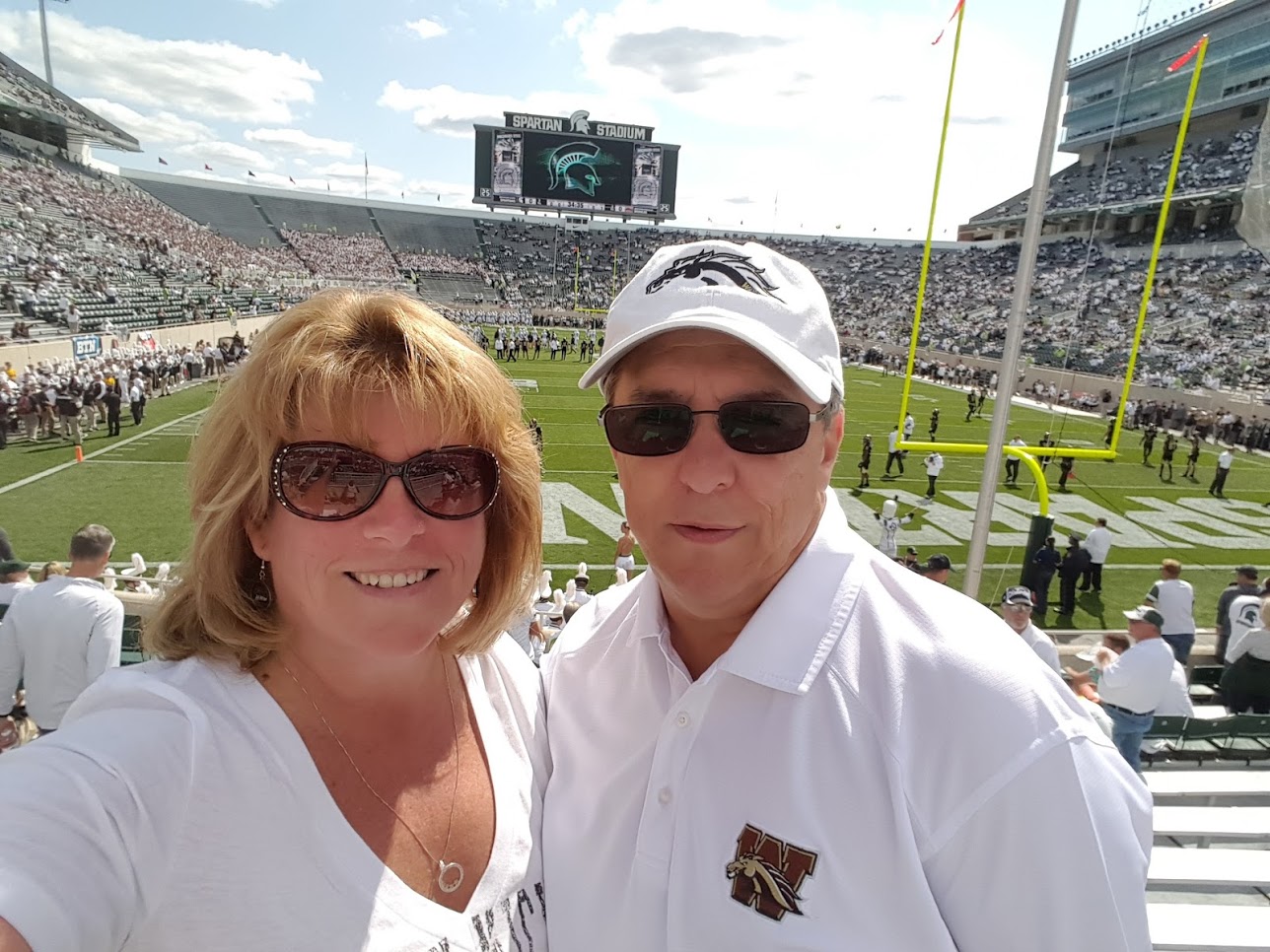 Gail Rouscher is the poster person for what teaching is all about.  Read her words to explain what she does as an instructor at the WMU College of Aviation and why she does it:  "There are many reasons why students struggle or are not putting themselves in a situation in which to grow. Being involved in any way, showing that I am passionate about what they are passionate about -- being available, willing to share in their joy and sometimes their sorrows, is important.  Students have to feel that there is someone they can rely on, talk to, and ask questions they may not be able to ask others. I hope that I am one of those people for them.

Request College of Aviation Information"It is important to me," she continues, "that, not only may someone see me as someone who looks like them, but also someone who can easily be approached -- and willing to be there."  Rouscher has been "there" at the College of Aviation since 2008 instructing such courses as introduction to airframes and systems, maintenance practices, aircraft structures, advanced structures and materials, and aircraft systems for pilots.  Not only does she bring academic credentials to her classes, but also the professional and practical aspects of what she teaches. 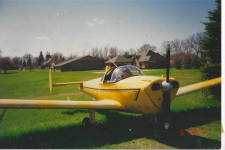 Raised in Macomb County's Clinton Township, a northern suburb of metropolitan Detroit, Rouscher needs a large wall in her home to showcase the four diplomas she has earned -- an associate's in applied science (production technology) from Kellogg Community College (2004), a bachelor's in management and organizational development from Spring Arbor University (2007), a master's from Spring Arbor (2009) in organizational management, and her doctorate in educational leadership in higher education from Western Michigan in 2018.  And, if the U. S. Navy awarded such paper certifications, there would a fifth.  It's in that branch of the military service where her mechanical talents and interests focused on how and why winged creations can defy the law of gravity. "My interest in aviation started with the Navy," she says.  "I wanted to do something mechanical and there was a position in aviation, so I took it."  Right after high school, she enlisted and was placed in the rank of aviation machinist mate.  Her stations included the Selfridge Air National Guard Base's Naval Air Facility near her home community and a tour of duty at the U.S. base near Cadiz, Spain.  Examining the innards of engines, gearboxes, starters and the like became second nature to her.  "They were pulled off the aircraft (P-3 Orions and C-130 Herculeses) and brought to the shop to work on and test," she says.    Once the Navy was in her rear-view mirror, she trained for and received her "A&P," the airframe and powerplant certificate issued by the Federal Aviation Administration.  While in that learning phase of her career, Rouscher worked weekends for American International Airways, part of the ancestry of what is now Kalitta Air.  That's where she got up close and personal with the workings of DC-8s, L-1011s and B-747s. 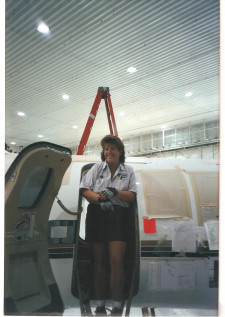 Once A&P certified, she moved westward to Kal-Aero's operations at what was then known as W. K. Kellogg Airport in Battle Creek and which is now the home of the WMU College of Aviation. "After one year in its interior shop," she says, "I transferred to the sheet-metal shop (in what is now Duncan Aviation)."  As part of that transition, she was assimilated into the avionics (all things electronic when it comes to flying a plane) department for training while retaining her sheet-metal status.  "When new systems were installed into aircraft," she explains, "the sheet-metal crew would mount the new equipment, computers, antennas and the like."  As part of that evolution, Rouscher was introduced to the profession of teaching.  "At Duncan," she says, "I had the opportunity to be the trainer for the sheet-metal department and its new technicians."  The rest is history because the WMU College of Aviation and its program in aviation technical operations were just down the road.  And she soon entered into the next chapter in her professional life.  Rouscher immensely enjoys the courses in aircraft structures, particularly the lab sessions. "All hands on, always something different.  Seeing the advancements in the industry and being able to incorporate them into projects is exciting.  Students get to make a really awesome project with carbon fiber.  They can take that with them to remember the time spent at our college."  She recalls one student who was having difficulty comprehending some course material, and could not convert the information from lectures into a project.  "After working with the student individually," she says, "I literally watched as the light bulb went on. The student had an 'aha!' moment right there.  No more struggles with the material at hand."  That was an "aha" moment for Rouscher as well.  She regards herself as a resource when interacting with students, informing them about what the aviation industry has to offer and the opportunities that can be pursued, including the wisdom of seeking a graduate degree.  "It is not my place to give them answers," she says, "but to share the different available paths based on what their goals are.  Not all students have the same destination in mind.  It is part of my role to help share what the many different paths to their future are." 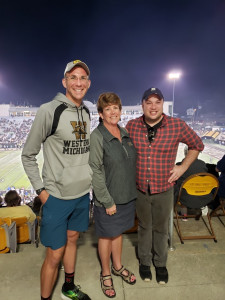 Outside of the classroom, Rouscher makes it a point to also be "there" for College of Aviation students.  She's a reigning board member of the Association for Women in Aviation Management (AWAM), which makes her a highly valued advisor to the WMU student chapter.  She performs a similar role for Western's chapter of Women in Aviation International.  Through her AWAM affiliation, she's been involved in the Air Race Classic, the annual, transcontinental 2,400-mile competition for female pilots that WMU fliers have won in the past.  "I have been a volunteer as an inspector," she says, "and a judge over the past few years, including head judge in the 2019 event."  The AWAM connection opened the eyes of one of her students to what true diversity really means.  When discussing the possibility of AWAM scholarships, she recalls, "a male student rolled his eyes.  I said that AWAM was open to anyone who supports women in the field of aviation.  So he applied for scholarships and received them.  He has returned a few times since then to share that experience with students who have followed him."  Rouscher has also been active in the college's participation in the Aerospace Maintenance Competition and SkillsUSA, an organization for career and technical students at the K-12 and college levels that promotes an annual national competition. If the college had a speaker's bureau, she would be a star attraction, having logged many bookings behind lecterns talking to community groups about her passion for aviation and the WMU program. 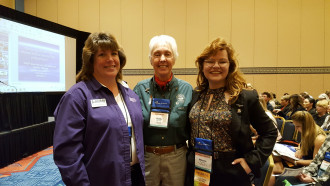 A common thread in her classroom interactions with enrollees is the power of networking, no matter what the field of endeavor.  "It's never too early to begin those relationships," she says.  "Any chance for them as students to work with others in the field is a positive.  Providing opportunities for members of RSOs (registered student organizations) to get involved in the community also helps bring public awareness to the college."  She cited placing wreaths on graves at the Fort Custer National Cemetery, helping with repairs at an American Legion hall, and grooming walking trails for the Humane Society of Southwest Michigan.  She brings a unique perspective to the students who seek her advice.  No matter what challenges they face, chances are she's been "there."  Read her words again:  "I have been in school full time for too many years.  I know what it means to have a family, work full time and go to school.  I can relate to single parents, those who are overwhelmed with responsibilities, those who have been in the military.  I believe I can say I have experienced what most of what our students are experiencing. 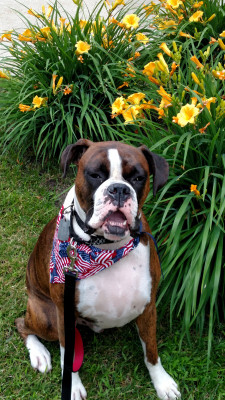 "Being a role model and offering support to students in any way I can is important," she says about assisting with networking, scholarships, and guiding them to make the right decisions for them.  All this adds up to making the College of Aviation experience a memorable and profitable one.  Which epitomizes what she calls "the best part" of her job -- student success.  "Seeing students grow and succeed in their major is so very rewarding.  Working with students who may not understand something, and suddenly they get it!  I literally can see it happen in their eyes. That's the best."

Away from the classroom and her participation in extracurricular activities, Rouscher is a baker, chef, gardener, camper, reader and traveler -- the latter seed was planted during her Navy career.  She and spouse John celebrated their 20th wedding anniversary visiting London and Paris.  At family get-togethers, there are two grown children and their wives, her mother, the couple's dog Boomer and three "granddogs." When the football season rolls around, it's "Brown and Gold Time."  The Rouschers can be found at every home game in Waldo Stadium, plus choosing at least one road contest at such destinations as Central Michigan, Illinois, Michigan, Michigan State, Ohio State and Akron.  And, of course, they also savored at the journey to Dallas and the Cotton Bowl energy against Wisconsin.  Oops!  There's another "best" for Rouscher -- Diploma Day.  "Seeing how far the students have come to reach that point of graduation is amazing," she says.  "That is part of why I really enjoy teaching the 'intro' classes.  I get to see many of the students when they are new to the college and then see their growth on that day.  It is awesome."  As Cousin Eddie told Clark in the cult holiday movie "Christmas Vacation," "it's the gift that keeps on giving."