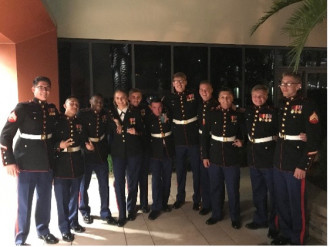 College of Aviation students who share class time with Charles Helmer receive a bonus in their instructional knowledge and perspectives. So do the folks in the front of the classroom or lab.  Helmer, a senior majoring in aviation technical operations, is able to offer what he learned about the profession during his five-year stint in the Marine Corps and what he is currently being exposed to on the payroll of nearby Duncan Aviation.

Request College of Aviation InformationHelmer was raised in Six Lakes, Mich., located about 30 miles southwest of Mt. Pleasant in the central part of the state's Lower Peninsula. The community takes its name from the geographic fact that the six bodies of water are a chain of lakes connected to each other. After graduating in 2012 from Montabella Junior/Senior High School in Blanchard north of his hometown, Helmer enlisted in the Marines and after basic training, served as an avionics technician.  "It was at this time that I grew to love working in aviation," he says, sparking a desire to pursue a career in the industry -- specifically a degree in aviation maintenance. As his enlistment was winding down, Helmer scanned what was available as a next step. 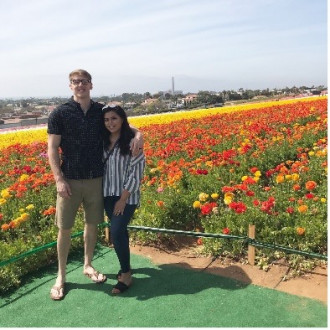 Helmer and his wife, Jandery, at The Flower Fields in Carlsbad, CA

"WMU has one of the most well-known and respected aviation colleges in the country," he cites as one factor. The other was based on personal economics. Because of his Marine experience, Helmer landed a post as an avionics technician with Duncan, the largest privately owned business-jet service provider in the world. One of its main headquarters is based near the College of Aviation at what is now known as the Battle Creek Executive Airport at Kellogg Field.   "This allows me to work full time while earning my degree," he says about the win-win for him. "I have the opportunity to receive an education from one of the best aviation colleges in the country while also gaining valuable work experience at Duncan, which is just as highly respected in its field."  In his own way, Helmer, because of his military and civilian experiences, is adding value to what his peers are gaining in their classroom encounters. "In the Marine Corps," he says, "I was an avionics technician, a quality-assurance inspector and auditor, and a work-center supervisor. I loved my time in the Corps. It gave me a great sense of purpose because I found the work important and meaningful. You also can't beat the lifetime friendships I forged with Marines and sailors. I cherish that."  In addition to sharing those perspectives about the industry, there is what the Duncan post is bringing to his resume. "It has introduced me to countless different avionics suites, cabin-management systems, and Wi-Fi units found in today's generation of business aircraft. I have learned more in my two-and-a-half years at Duncan than I could have imagined. It has been incredible." 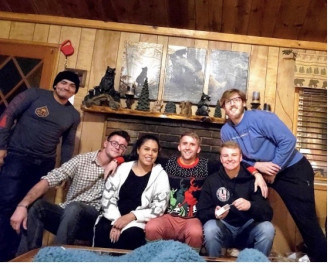 Helmer and best friends from the Marines Corps at their annual "Friendsgiving" trip to Big Bear Lake, CA

Helmer has found time to sample other opportunities available at the College of Aviation. He's a member of the College's Aerospace Maintenance Competitive Team. As its president, he is looking forward to the national competition for similar units from across the country in the spring of 2022. "I hope that my experience in the industry will greatly help our team in the competition," he says.  Another boost could come from what he learned in the lab for "Reciprocating Engine Overhaul" overseen by faculty specialist Jeremy Hierholzer. "It is an extensive and laborious lab that requires working with your hands to tear down, clean and rebuild an engine. We technical-operations students picked this major to do things such as this. For that reason, it has been my favorite class."  Also high on Helmer's list chronicling what makes Western special are the relationships he built with fellow students and instructors, calling them "incredible." 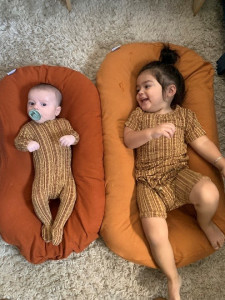 "I am in my third year at WMU and have welcomed my second child within this time period," says Helmer whose family now includes wife Jandery and sons Benjamin, 2, and baby Luca. "I had to take time to be with them. The faculty did everything possible to help aid in my studies and make things less stressful. They made themselves available via WebEx to discuss questions. They took time out of their lives to be available for make-up time for me. They offered kind words when my kids have been sick. The faculty within the technical-operations program has been fantastic throughout my time at Western."  As he was searching for an educational landing spot while still wearing Marine fatigues, Helmer's radar came across the highly regarded, privately operated Embry-Riddle Aeronautical University. But he chose the public-institution path, which allowed him to take a variety of WMU classes, such as the one focusing on indigenous North America. "It was interesting to explore something completely out of my field of expertise and learn about the history of our country," he says.  So what's next for Charles Helmer? Immediately in front of him is to qualify for the Federal Aviation Administration's A & P (airframe and power plant) certifications that are required for an aviation technician to perform maintenance, repairs, and tests on aircraft.  "After that," he says, "is a plan to attend grad school and pursue a master's in business administration, strengthening my knowledge base and resume for future endeavors."  He envisions a "future endeavor" being the director of maintenance for a major shipping company.  Who knows? That future Christmas gift on your doorstep may safely arrive via FedEx or UPS, compliments of Charles Helmer's fleet. Don't bet against the former "Jar-Head" -- and College of Aviation grad.