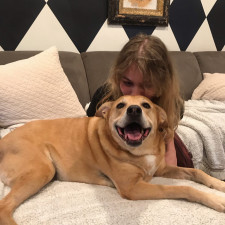 Helen Hoffman and June, the best co-pilot anyone could ask for!

From disc jockey to throttle jockey to -- maybe -- desk jockey to stunt jockey.  Welcome to the career path of one Helen Hoffman.

Now in her senior year at the Western Michigan University College of Aviation, Hoffman is pursuing a double major in aviation flight science and aviation management and operations -- with a minor in general business spliced into her academics.

Request WMU College of Aviation Information
She's a 2018 graduate of Berkeley High School in her home city of Huntington Woods, Mich., which is located in southeast Oakland County and is considered a northern suburb of Detroit.  Like many a teenager, she was uncertain of her future course in life, but she also realized that the best place to get something started was in her high school years. 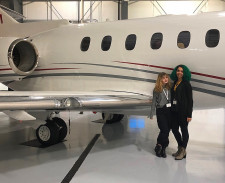 "I took several AP (advanced placement) classes," Hoffman says, "and with a couple of online courses, I was able to graduate one year early with honors.  While making my tour of college campuses, a friend of the family took me for a flight in his plane.  From then on, a degree in aviation was my goal."

So naturally, her sights set on the NCAA Division 1 university in southwest Michigan due west of her hometown  -- the one with the renowned aviation program.  Not quite.

First choice was Purdue University because that first aviation spark evolved into something of a flame when she applied to the Indiana school's program in aeronautical engineering.  "I was there (West Lafayette, Ind.) for an admitted-students tour and when I saw its airport, I was hooked on the idea of flying.  The thought of being a pilot was much more appealing to me than being an engineer.  Again, that seed had been planted when the family friend took me flying." 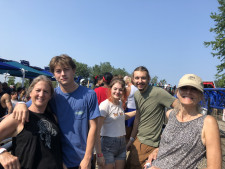 So it was Purdue versus Western, but this wasn't a tussle between the schools' football, basketball or baseball squads.  It was a battle for a future aviator.  The winner and still champ?  The Broncos and its College of Aviation.

At first, Purdue was still in the game, but a tour of Western's Kalamazoo campus and the college's aviation headquarters in Battle Creek changed all of that.  "I chose WMU because when I made the tour," Hoffman says, "everything really fell into place for me.  WMU stood out because everyone I met was so welcoming and friendly.  While the environment was serious, it was not intimidating.  I felt like everyone was truly there to help me succeed."

Almost immediately in her freshman year, Hoffman joined the southwest Michigan chapter of "The 99s."  Also known as the International Organization of Women Pilots, it provides networking, mentoring and financial scholarships to both recreational and professional female pilots through its 155 chapters around the world. "The 99s" boasts some impressive lineage.  Its establishment at a small airport near New York City was orchestrated by Amelia Earhart, who served as the group's first president.  Of the 117 female licensed pilots at the time in the United States, 99 attended.  Hence the name. 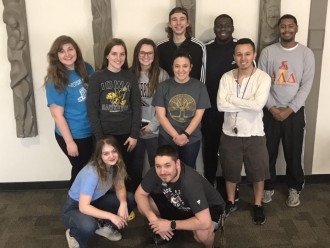 Another "freshwoman" initiative for Hoffman was joining the staff of WIDR, the campus radio station for students, and is one of its disc jockeys.  "I love music and hosting a show is a fun way to involve it in my life," Hoffman says.  When she's not hiking or roller blading if the weather permits, she paints.  Plus, for the last two years, she's sang in a band, Housecoat.  The band is known for its take on alternative rock.  Maybe someday Hoffman will get the chance to play one of her own songs on her show.

Not satisfied with sitting still, Hoffman also was hired to serve as one of the Learning Community Assistant for the "Aviation Learning Community" based in Henry Hall.  "It was such a fun experience to be able to get to know a lot of the incoming students," she says about hosting events and having office hours.  "It is always nice to see my former residents out at the airport."

These activities combine into being her favorite feelings about Western.  "Aside from learning to fly," she says, "my favorite part about WMU has been all the people I have met.  I have made many life-long friends.  I have WMU to thank for that."

There has been some no-pain-no-gain along the way.  "Learning to fly is truly the most challenging part of my life so far," Hoffman says.  "It is not easy, especially in such a fast-paced environment.  Getting knocked down and continuing to get back up was tough, but I am so proud of how far I have come.  Aviation students are a unique group of people.  The future of aviation has never looked brighter." 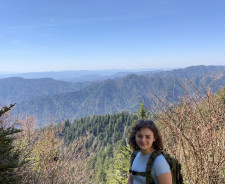 Hoffman pursuing one of her passions - hiking. This time in the Smokey Mountains

Helping her to "get back up" was the course in flight physiology where she experienced the sensation of hypoxia: a deficiency in the amount of oxygen reaching the tissues in a human body.  The condition affects the central nervous system, leading to impaired judgment and decision-making capability.  A threat at high altitudes and possibly causing unconsciousness, it is obviously not good for pilots.

"That class was awesome," she says, "because I was able to do the high-altitude chamber and learn about hypoxia first-hand.  It is very important for pilots to experience that feeling so that they can recognize it in themselves and others."

Closer to the ground -- and also allowing her to get airborne a tad -- was another favorite class: dance appreciation.  "I had so much fun," Hoffman says.  "I was by no means good at it, but it was fun to learn different styles of dance and not take myself too seriously."  The only place to do the latter is when she is behind the controls of an airplane. 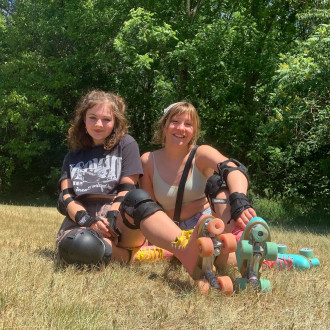 While that kind of a non-aviation perspective might have been available at Purdue and possibly at an institution of higher education that is 100-percent aviation, that kind of opportunity is part of the allure of Western as a comprehensive university.  Hoffman might be one of the few pilots who know how to polka, waltz, tango, rumba, square dance and flamenco.

But no matter how she "trips the light fantastic," Hoffman has her sights on some immediate objectives.  With her degree in hand, she'd like to start as one of the college's certified flight instructors to pad her resume and then land a job in corporate aviation in the western part of the nation.

"My absolute dream job is to be a stunt pilot," she says.  "Ever since my 'upset recovery' training in the commercial course, I have loved the idea of aerobatics.  If I ever get the chance to do more, I will 100-percent take it."

And hopefully with the safe landing of a ballet dancer.