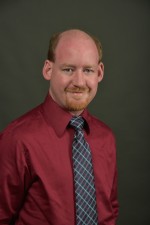 Broadwater started flying in 1996 at the Willow Run airport. He began working at WMU in 2000 as a dispatcher and graduated from WMU in December 2001 with a Bachelor of Science in aviation flight science. Broadwater became a flight instructor at WMU in January 2002 and has taught private, instrument, and commercial single and multi-engine pilots and CFI students. In October 2007 he became a faculty specialist and continues to work with CFI students, updating the CFI syllabus and doing progress and stage checks.