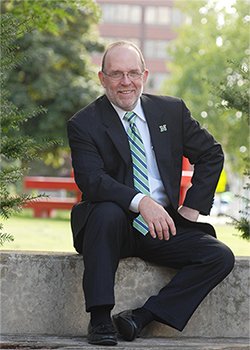 Dr. Erickson grew up in a family of both educators and Broncos. His father was a faculty member in WMU’s College of Education and Human Development, his mother was a literacy educator for KRESA (Kalamazoo Regional Educational Service Agency), and his two brothers and sister are WMU alumni. Although his family was full of Broncos, Dr. Erickson originally attended Central Michigan University (CMU). While attending CMU, Dr. Erickson had two great years, and as he describes it, “maybe too good.”  It was then that Dr. Erickson realized that although CMU was very a very fun place to be, it was not the right fit for him and left the university.

After deciding to move back to Kalamazoo, where he had grown up, he began work in a local print shop and quickly realized that he wanted to head back to school and earn his degree from Western Michigan University. Erickson walked into WMU’s Office of Admissions and asked to be admitted to the University.  He found that it was not so easy to simply pick up where he left off and was told by an admissions advisor to take a year and attend Kalamazoo Valley Community College and “show me you can do it.” Dr. Erickson did just that and spent some time at Kalamazoo Valley Community College in order to get his grades up.  He was able to transfer into WMU and begin his journey here in 1976.  He decided to follow in his family’s footsteps and earn a degree in education.  He went on to receive his master’s in curriculum and instruction and an interdisciplinary Ed.D. in educational psychology, technology, and research methodology, both from the University of Northern Colorado.

Dr. Erickson has since held many administrative roles.  He previously served as dean of the College of Professional and Graduate Studies at the University of Wisconsin-Green Bay, dean and professor in the College of Education and Human Development at Eastern Washington University, and chair of the Department of Education, as well as professor of education and psychology at Michigan Technological University.

His most recent position prior to his Presidency at NMU, was at Ferris State University in Big Rapids, Michigan, where he served as provost and vice president for academic affairs.  Dr. Erickson was in the role from 2009 until 2013 before accepting the position at NMU.

Dr. Erickson became the 15th president of Northern Michigan University on July 1, 2014.  The NMU board of Trustees unanimously voted in favor of the appointment at a public session held on April 22, 2014.  He was one of four candidates for the position. Dean Li, along with Amy Routhier, the college engagement officer recently had a chance to visit Dr. Erickson at NMU and personally congratulate him on his new role!

Due to his hard work and dedication, Dr. Erickson was able to prove himself, like many Broncos do.  He took his second chance by the reins and is now one of our most successful alumni.