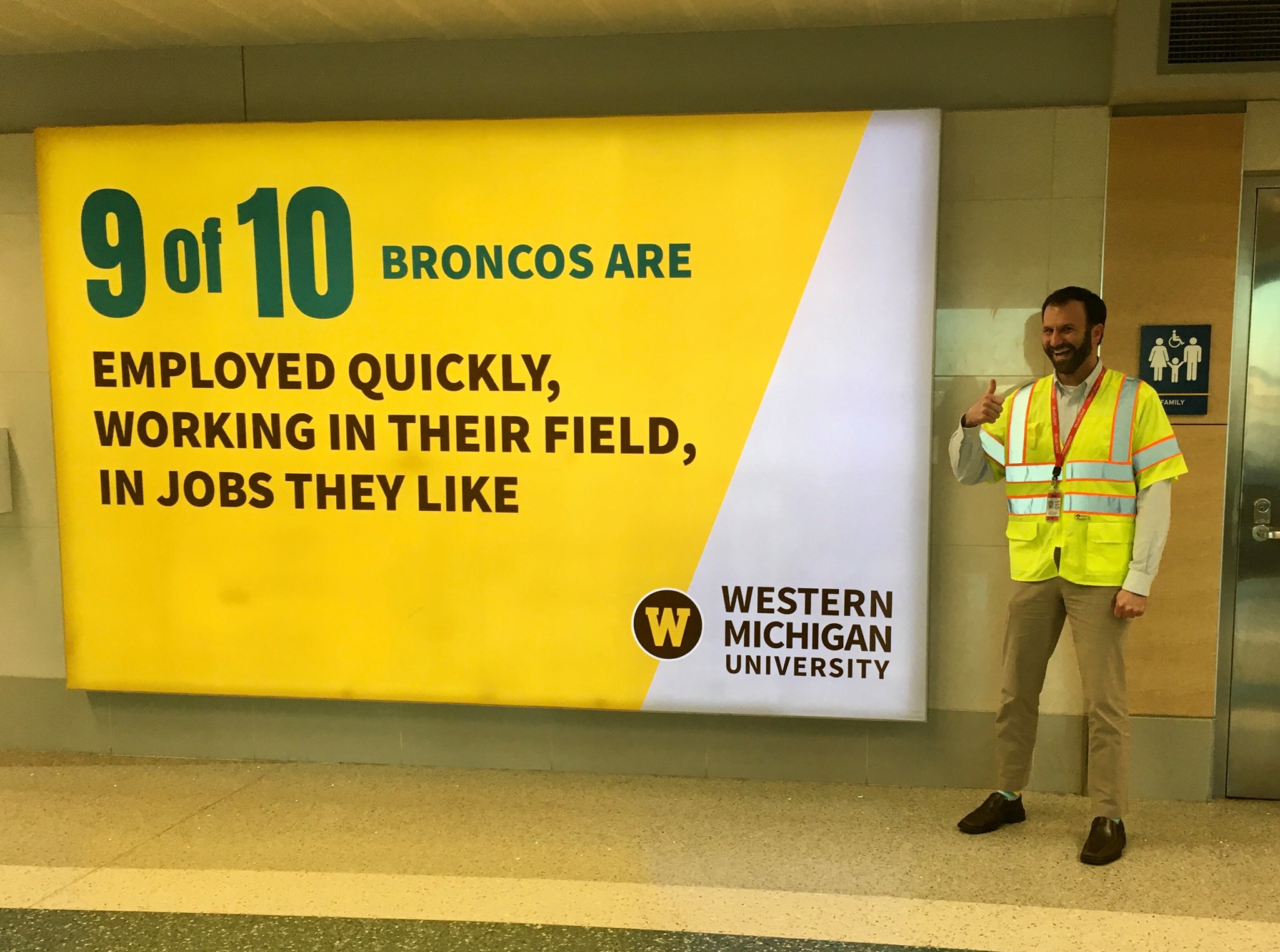 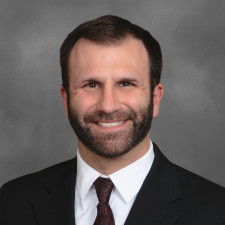 Zachary Puchacz is the perfect presenter for an Aviation Career Day.

Try these resume stuffers for the Western Michigan University College of Aviation alumnus:

Not bad for a 1999 graduate of Hemlock High School, located in a community with less than 1,000 folks and situated just east of Saginaw where he was born and where Michigan's famous geographical "The Thumb" takes shapes. 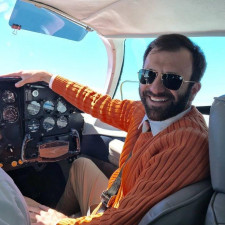 Puchacz enjoying the beauty of flight

Puchacz grew up with big planes over his head.  "My parents live under a runway approach path at the MBS (Midland, Bay City, Saginaw) International Airport in Freeland (north of Hemlock)," he says.  "As a child, I watched Northwest Airlines DC-9s come in for landings."

That wasn't the only factor spurring his interest in things airborne.  There is also the Tom Cruise effect. "I also credit my mother who rented 'Top Gun' on VCR and allowed me to watch the intro one summer afternoon," he says.  "After that five-minute viewing, even as a kid, I wanted to have a career in aviation."

That dream endured at Hemlock High.  His higher-education search focused on aviation programs, which made WMU a "no-doubter" since he also had a preference to stay in his home state.  The deal was sealed during his on-campus visit and introduction to the "great community of Kalamazoo."

Puchacz majored in what is now aviation management and operations and minored in business on the way to his 2003 WMU degree.  During this time, he held his first job in the industry as an intern at the Kalamazoo/Battle Creek International Airport.  That stint cemented his decision to focus on the management aspect of aviation and prepped him for his first full-time job -- at Teterboro Airport in New Jersey as an operations coordinator. 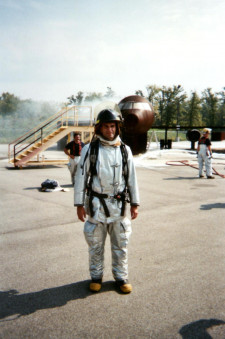 That outpost also provided the opportunity to become certified as a fire fighter and airport weather observer.  "I did not realize that my experience in airport emergency response," he says, "would open opportunities for me later in my career."

Not just textbook stuff, Puchacz sampled reality during three aircraft emergencies, the most prominent being an aborted take-off overrun of a Challenger 600 on Feb. 2, 2005. "I was one of the first responders on the scene," he says.  "Learning how to keep your composure and make quick decisions in an aircraft emergency are skills that I have valued and applied to many subsequent situations."

It was also at Teterboro where his paths crossed with all types of dignitaries who jetted into the Northeast for various reasons.  Professional baseball, basketball and hockey teams landed there for their games in New York City.  Donald Trump had a helicopter based at Teterboro.

After taking bites out of life in and around the Big Apple from 2003 to 2005, Puchacz headed home to launch the next phase of his career -- a four-year stint as an operations officer at the Capital Region International Airport in Lansing where he absorbed more management insights and the day-to-day operations of a mid-sized airport.

"While there," he says, "I became certified as a 911 dispatcher.  Also part of my duties was as an inspector of airport-fueling facilities and fueling operations.  My experience at both airports led me to being asked, as an observer, to comment and provide suggestions on how an airport can improve its emergency response."

Then there were job duties with the notables, which Puchacz referred to as "VIP movements.”  He says that involved “closely working with the Secret Service when politicians would visit the Lansing area.  I frequently interacted with college teams that would be coming to Lansing for athletic events at Michigan State University." 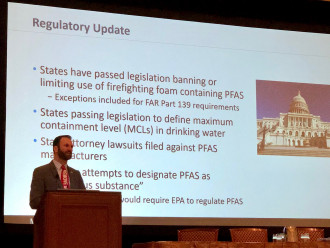 In 2009 (and right to the present), it was time for another career shift -- an airport planner for Mead & Hunt, a 120-year-old engineering and architectural-design firm with more than 30 offices around the United States, including one in Lansing.  "I consult with airports on a variety of planning issues," he says, "such as future infrastructure development, runway extensions, terminal expansion, aviation activity forecasting, financial planning, and projecting eligibility for federal funding."

In that capacity, Puchacz has become the guy to check out when it comes to PFAS -- per and polyfluoroalkyl substances, the man-made chemicals that have been in use since the 1940s for waterproofing, food packaging, household cleaners and non-stick cookware.  Puchacz comes into play because PFAS are part of the formula for aqueous film-forming foam (AFFF) used in extinguishing aviation fires.

He co-authored an Airport Cooperative Research Program (ACRP) report that became one of the first that focused on PFAS in AFFF at airports.  "That resulted in me becoming someone with knowledge about the topic and making presentations at aviation conferences across the country.  That has been rewarding to me knowing I am contributing to the aviation industry in this aspect."

Even before his Mead & Hunt chapter, Puchacz has been a travel aficionado.  Because of the friendships he forged during his four years of Western, he keeps his passport up to date as he travels the planet, including a recent adventure to visit a Bronco pal now calling Bangkok in Thailand home.

"As an airport planner," he says, "I have been able to meet many leading aviation professionals from across the country and the world.  I work at all kinds of airports on many different types of projects.  Being able to find solutions for an airport's challenges by sharing my knowledge and experience is very rewarding.  So are the networking opportunities that this all brings."

Puchacz regards himself as a life-long learner, but he also recognizes that he comes equipped with a solid foundation of knowledge, thanks to the College of Aviation and inclusion in the Lee Honors College at Western.  He flashes back to the final assignment in his airport-management class -- a research paper on the management of an actual airport.  He chose the one located in northern Kentucky that serves the Cincinnati region.  More kudos goes to associate professor Lisa Whittaker for her guidance and assistance in securing that first internship.  They still cross paths at aviation-related conferences. "Not only did I advance in my education while at WMU," he says, "I also advanced as a person."

When Puchacz is booked to make a presentation at aviation conferences throughout the United States, he -- naturally -- puts in a plug for the company that signs his paychecks, but next comes the WMU College of Aviation.  He believes he is serving as an ambassador to Western in general and the College of Aviation in particular. 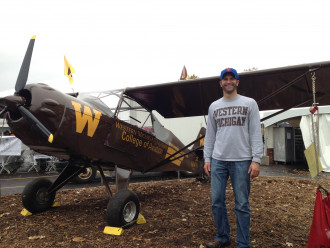 Puchacz supporting his alma mater at an aviation outreach event

"I have been honored to also be a guest lecturer at meetings of student organizations and aviation classes at WMU," he says.  "This allows me to share my experiences and knowledge that focuses on Western students.  I hope that I am contributing to their education while preparing them for what to expect when they enter the industry after graduation."

Because of his membership in the Honors College, his freshman roster of classes was shaped so that there were familiar faces in multiple classes.  Same with the aviation courses.  The result has been lifetime friendships.  By the time the sophomore year came around, they all lived on the fifth floor of Eldridge Hall.

Then there was Bronco hockey, a natural extension for a fellow who has played the sport since childhood in the Saginaw area.  "I attended every home football game and loved watching the Bronco Marching Band," he says, "but by far my favorite sports memory was being in the student section at Lawson Arena for WMU home hockey games.  I only missed two games in my entire college career.  There is no hockey experience that duplicates being a Lawson Lunatic."

Which is why, when Gary Bettman sauntered by at a New Jersey airport, at least one person -- Zach Puchacz -- paid close attention.