Cruising with Captain Cooper – Heather’s Ups and Downs in Aviation 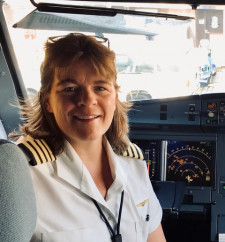 WMU Aviation Alumna, Captain Heather Cooper on her favorite airplane - the Airbus A320

It was the best of times, it was the worst of times -- and WMU College of Aviation alumna Heather Cooper has experienced her industry's "worst" twice.  Now a United Airlines captain piloting the largest of aircraft, she survived the panic after "9-11" and, like the rest of the world, is pondering the future of the planet amid the personal, cultural and financial ravages of Covid 19.  A lot of contrails have dissipated into the atmosphere since Cooper glided off the stage in 1993 with a Western degree in aviation flight science.  Way back then, the College of Aviation was based at the Kalamazoo/Battle Creek International Airport -- and closer to the WMU home campus.

Request College of Aviation InformationIn her case, she had chosen a higher-education route that was both close to home, and right on course when it came to her career interests.  "Home" was Lowell, Mich., a "bedroom" community to Grand Rapids (about 20 miles to the west) and where she graduated from high school in 1989.  "My dad owned a Piper Cherokee," she says about the four-seat, low-winged aircraft in which she spent a good part of her childhood.  "He purchased that little plane to spend some quality time in the air with his sons."  It didn't work out quite that way. Both of her brothers experienced air sickness.  It was Little Heather who got hooked on flying.  At 13, she started her flying lessons in that Cherokee.  But the Piper wasn't her only direct lineage to aviation.  Her grandmother was among the first female student pilots in that part of Michigan.  Both grandparents were pilots for the Civil Air Patrol, the volunteer-based auxiliary of the U.S. Air Force that takes part in search-and-rescue missions, disaster relief and aerospace education.  The organization really earned its wings during World War II in the homeland. 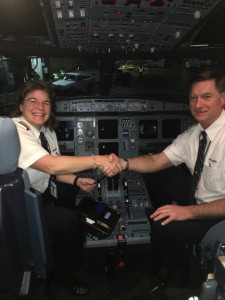 And that's not all.  A neighbor captained first for Eastern Air Lines and then for United.  A cousin flew tankers in the Air Force and a close family friend was a Navy pilot.  Cooper's choice of the College of Aviation wasn't a slam dunk.  She had also applied to -- and been accepted into -- Embry-Riddle Aeronautical University's campus in Arizona and Purdue University's aviation program.  "I really liked all three and all have great reputations in the industry," she says.  "The tie-breaker was cost.  WMU was a great value compared to the other two," especially when fellow pilots talk to her about their student-loan debt.  Once an "Air Bronco," Cooper showed her skills well enough to become a certified flight instructor and teach her fellow students in a variety of courses.  But that's not all she did to build up hours.  She was hired by small enterprises as a freelancer to pilot single and twin-engine aircraft -- both piston and turbo-prop jobs.  "Back then," she recalls, "you got your hours whenever you could.  There weren't any training agreements or internships with regional carriers.  You got your training and then you were on your own.  You networked with other WMU alumni and hung out at the local FBO (fixed base operator) hoping to meet someone who needed a pilot."  One year after her Western graduation, she landed a freight-flying gig with Murray Aviation at Willow Run Airport in Ypsilanti -- lots of on-demand, express-freight business with the Big Three automakers and some package delivery for FedEx.  In that role, Cooper was in control of Casa 212s and Mitsubishi MU-2s.  The Spanish-designed Casa is a medium-cargo, turbo prop designed for short take-offs and landings.  The latter -- one of Japan's most successful aircraft -- is a high-winged, twin-engine turbo prop.  All of this prepared Cooper for joining United Express, one of United's regional airlines that flies out of O'Hare in Chicago.  The only aircraft in its fleet was the short-ranged British Aerospace ATP (advanced turbo prop) known for low noise and fuel efficiency.  "It's a 64-seater that flew to a few cities around the Midwest," she says.  "This was my first job working for a scheduled service and I knew that's what I wanted to do for my career." 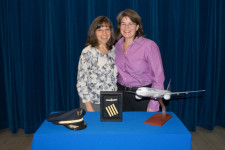 Cooper and her wife, Diane Titche, at the United Airlines wing presentation for new captains

Next stop -- in 1996 -- was "the No. 1" -- being hired at United Airlines.  "Like many," she says, "I started as a flight engineer on the Boeing 727.  Since then, I have also flown the 737, the 777 and the one I am currently flying, the Airbus A320, which is my favorite so far.  I started an A320 first officer 19 years ago and now I'm a captain."  Strange as it may sound now, Cooper almost turned her back on her flying career.  In those days, immediately after her name was printed on the Western degree, she considered joining the National Business Aviation Association as a Washington lobbyist.  "The job market for pilots was pretty bleak at the time," she says.  "I have a love of politics and thought that would be a good way to marry my two passionate interests."  There they were -- two forks in the road, and which one to choose?  The lobbying job was in one hand and soon in the other was the offer from Murray Aviation.  She picked the latter.  "I knew that the air is really where I wanted to be," she says. 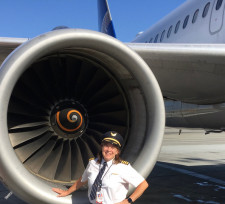 Captain Cooper and her beloved Airbus A320

Helping her make that decision was another factor that can be traced to her Western days and being in the clouds.  "I loved being on the Sky Broncos Precision Flight Team," she says.  "We were a pretty tight-knit group and it created life-long friendships.  We had a lot of fun and I learned so much from my teammates and from the competitions."  Cooper still carries fond memories of instructors who prepared her for career opportunities and challenges -- Mark Lancaster, Tom Deckard, Ron Sacket, Bob Ardema and Larry Hoika.  They were "tough," hands-on when necessary to make the technical lessons stick, extremely knowledgeable in their expertise, creative in their approach to teaching, always accessible, encouraging and passionate about aviation.  Cooper could count on them for letters of recommendation "so I could take the next steps toward my goal of being an airline pilot.  Many of my classroom peers were helpful, too.  We helped each other when it came time to get the next job.  Networking with fellow alumni was extremely important along the way."  Now Cooper finds herself in a similar kind of role-model function. Lifting a huge airliner off the runway is enough of an adrenaline rush, but for Cooper, there is something else that is just as rewarding.  "Setting the tone for the flight and being the leader of the crew is the best thing about my job," she says about Charles Dickens' "best of times."  "I really enjoy the responsibility of making decisions for the flight. I have learned a lot being in a leadership role.  We have some amazingly talented people at United and I feel fortunate to be able to tap into their knowledge." 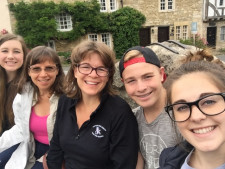 Cooper and members of her family while touring the English countryside

All of this has condensed into what Cooper calls "a fantastic career."  But -- not surprisingly -- there has been a bit of turbulence.  Nothing like "9-11" or Covid, of course.  "Being a female in a predominantly male career," she says, "has posed challenges that I hadn't considered before going into the field.  While there has been improvement, there are still family and maternity issues, or not being recognized as the captain when flying with a male co-pilot.  But, in general, I can't complain."  She admits that "9-11" was tough on her personally.  "I lost a couple of co-workers who I had gotten to know personally.  That's really hard to accept.  Add to it that your airline is heading for bankruptcy and your career is taking major hits all at once.  It was challenging, but I feel it made me more resilient as a person and a pilot.  I learned a lot about myself and the industry during that time.  Now Covid has hit us really hard, but I feel more prepared to weather another storm.  That's what I tell young pilots.  Be prepared, get ready for the next big thing because it's aviation.  That's just part of the deal."  Cooper has probably logged more miles and hours with her hands on the controls of an airliner than when behind the wheel and steering a car.  But there is life for her on terra firma.  There's her spouse, Diane, and their four children:  Rachel is an occupational therapist; Jenn is a Boeing engineer; and Sam is still in high school.  No. 3 -- Ellie -- is somewhat following Cooper's footsteps.  She is a WMU sophomore majoring in political science and global leadership.  When she's not way up there, Cooper still resides east of Grand Rapids where she and her clan are hiking, camping, cooking, vegetable gardening, cycling, and taking part in a different kind of flying -- "piloting" drones.  Favorite destinations among the traveling memories are northern Italy, England, and driving Vespa motorized scooters along the Amalfi Coast between the gulfs of Naples and Salerno in southern Italy. 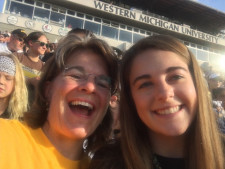 Cooper and her daughter, Ellie, cheering on the WMU Broncos!

"We recently purchased another kind of aluminum tube," she says about the family's new Airstream, the luxury recreational vehicle known for its rounded and polished metal frame.  "I have looked at a lot of great places from the air.  Now I would like to see them at ground level.  The goal is to visit all national parks even while I continue to fly.  That's what cool about my job.  I can commute from almost anywhere."  Regarding herself as a WMU ambassador as she continues in her career, Cooper has taken the additional step of being a sponsor for the WMU Air Race Classic Team, which is made up with a group of female aviators.  "It's fun to see our dollars being put to good use and watch the students excel in aviation that way," she says.  "Plus tracking their progress during the race."  In addition to checking in on daughter Ellie at Western's Kalamazoo campus "a few times a year," Cooper says "it's exciting to see the changes there since I was a student."  Even better is what she sees at the College of Aviation's "new" headquarters in Battle Creek -- new buildings and simulators, and an unparalleled fleet of aircraft.  "I think WMU does a great job of preparing students for careers in aviation, and at a great value."  Let's hope for Cooper's sake -- and the rest of us, for that matter -- that things really don't happen in "threes" -- that twice of "the worst of times," for God's sake, is enough.