Managing Matthew Wietstock: Pursuing a Career in Operations through Flight 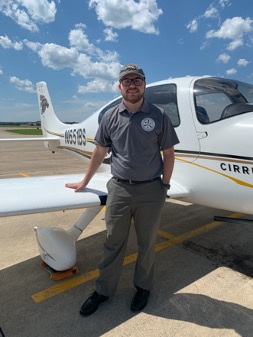 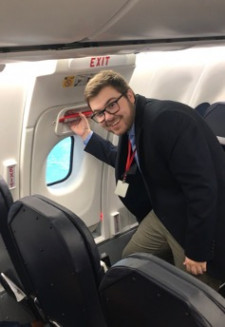 Matthew Wietstock evaluating the safety of the static aircraft display!

The thrill of riding a roller coaster is not the one you want to repeat in an airplane.

Nevertheless, College of Aviation junior Matthew Wietstock is such a fan of the slow "ups" and the hair-raising rapid "downs" of a coaster that he's willing to travel all over to experience them -- preferably by flying to the many theme parks that showcase them.

"Outside of college," says Wietstock, whose terrestrial home is Goshen, Ind., located a few miles south of the state's Michigan border, "I love going to theme parks for roller coasters.  I have planned several trips around just going to try new rides."

Request Information about WMU Aviation
While most pilots may not like to experience that kind of thrill, Wietstock is not your typical pilot.  His approach to higher education, which initially featured a music-composition major at Western Michigan University, is a bit backward.  Double majors in the College of Aviation are not that unusual, but Wietstock's prime path leads to a degree in aviation management and operations and then one in aviation flight science.  Peers normally reverse that plan.

What he does share with his fellow students is why and how he chose this particular career.  "My family traveled a lot when I was younger," he says.  "I always enjoyed spending time at airports.  They felt like such important places where everyone in the world came together for a common purpose.  Plus, planes are just plain cool." 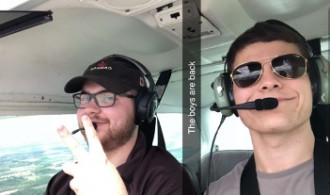 His days in high school in Goshen were not focused entirely on a K-12 curriculum leading to college.  "I got my private pivot's license during my junior and senior years," he says.  "No doubt though, it's a different experience flying at such a busy airport like BTL (Battle Creek Executive Airport at Kellogg Field where the college's aviation facilities are based) compared to the small airport literally in the middle of a cornfield where I did my initial training."

Wietstock, who now volunteers as one of the program's lead aviation ambassadors, did not have to look very far to choose a college curriculum that fit his interests.  Kalamazoo is about a 90-minute drive generally north of Goshen. 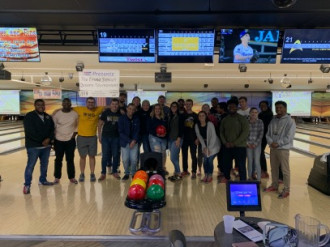 "WMU has such a welcoming feeling," he says about endorsing his choice.  "I instantly felt like I was some place special when I first stepped foot on campus.  Kalamazoo is a great college town.  My uncle earned his degree at Western and I knew how much he enjoyed it."  There was another lure.  As a freshman, Wietstock could double major in aviation and music composition.  No other university offered that.

Almost four years later, Wietstock has not lost his affinity for the Western culture.  "My favorite part about WMU has been the people.  I've made a lot of close friends here, both in and out of aviation.  The instructors do care about their students' well-being and success.  I love how all of them have experience in the aviation industry.  They go the extra mile to help students."

One of them is Stephanie Ward, who taught his favorite class so far -- airport planning.  "It was all about creating a master plan for the Kalamazoo airport," he says.  "It was fantastic to get first-hand information from the person (Ward) who wrote the master plan.  There's a ton of stuff that goes into making plans for an airport, especially when you get that direct information." 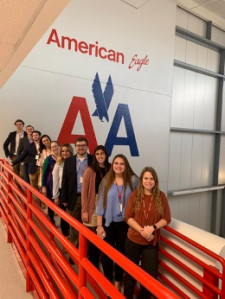 When Wietstock is not in class, adding to his flying hours, or biking some of the great trails in the Kalamazoo area, he's an active member of Western's chapters of the National Gay Pilots Association and Women in Aviation International (WAI). He's been the vice president and outreach chair in the latter.

Ranking as one of the best memories of his days at Western was attending the 2020 annual conference of WAI in Orlando, Fla.  "I made a ton of great connections and logged a lifetime recollection as well.  The entire WAI chapter drove over to Cape Canaveral to watch the SpaceX rocket launch."  That kind of liftoff might even beat a roller-coaster ride.

"I love the aviation community and I want to help attract as many people to it as I can," he says.  "Yet, the aviation industry needs to strive to be more inclusive (which is part of the missions of both organizations). WMU has one of the best gender ratios in college aviation, but there is always room to improve.  Women in Aviation offers some of the best tours.  The one I got during my freshman year (the world headquarters of United Airlines) convinced me to pursue the degree in aviation management and operations." 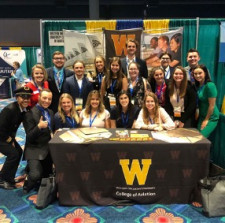 Wietstock brings the diversity perspective to his role as an aviation ambassador.  "I enjoy getting to meet potential aviators and guiding them along the way," he says.  "The college's recruitment team is so much fun to work with.  I enjoy going to work because I get to do something unique every day."

Even when he has a double-major degree in his pocket, Wietstock believes he might not be done with higher education.

"I would like to get a master's in international business administration," he says.  "While I'm not exactly certain where that may happen, it's definitely tempting to go international."

Makes sense because his dream job in aviation is working for a major international airline in its network-planning department.

Besides, there are scores of goosebump-causing roller coasters to sample all over this planet.