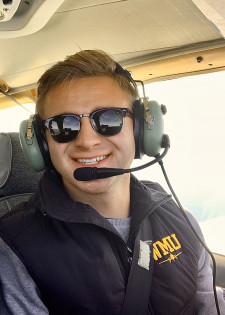 Hunter Hayes is among the relatively few college students who -- in pursuit of a specialty degree or career -- can sample higher education just about in their back yard.  The WMU College of Aviation senior hails from Bellevue, Mich., a 1,300-person village in Eaton County in the center of the Lower Peninsula's southern half.  The community is northeast of Battle Creek, the college's base of operations.

Request WMU Aviation InformationAviation came into Hayes' direct focus as a junior in high school in the fall of 2015 when he enrolled in the aviation-exploration course offered by the Calhoun County Career Center's Battle Creek campus.  The seed had earlier been planted that spring.  "I took a tour of the technical-based school," he says.  "I was excited about all of the components that the aviation course -- the aviation industry for that matter -- had to offer."  The final selling point for what would be his eventual landing in higher education was a class trip to the College of Aviation's campus at what is now known as the Battle Creek Executive Airport at Kellogg Field in the spring of 2016.  After his "discovery flight," Hayes said he knew he wanted a career as a pilot.  In his senior year, he took WMU courses offered at the career center, which has sped him toward his dual-major degree in aviation flight science and aviation management and operations.  In the summer of 2017, Hayes began accumulating flying hours at Great Lakes Air Ventures based at Mason Jewett Airport that serves the Ingham County city of Mason.  That community is northeast of Bellevue and due south of Michigan's capital city of Lansing.  At the time, he was one of Kellogg Community College's Gold Key Scholars as he prepped for his transfer to WMU.  "Western was the obvious choice for me to continue my education and aviation career," he says.  "Being so close to my hometown and being part of the reason for my introduction to the aviation industry made the decision easy.  WMU felt like home."  Attending the nearby technical-training center and earning more than a dozen credit hours directly transferable to Western didn't hurt either. 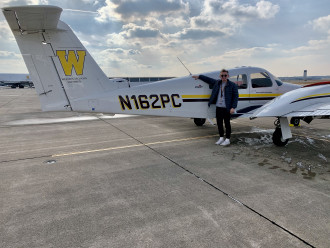 Attending the instrument-ground course taught by lead flight instructor James Whittles early on also cemented the wisdom of his decision.  "He does an exemplary job of creating a comfortable learning environment for his students," he says.  "He makes teaching instrument fundamentals a passion, and that leaves a permanent impression regarding knowledge you will be using for you entire career.  He goes the extra mile for his students and his teaching helped me transition into the College of Aviation.  He left me with an everlasting impression of what it means to be passionate and inclusive."  Hayes, who is a first-generation college attendee in his family as well as a first-generation pilot, quickly got involved.  He's now one of the College of Aviation's dispatchers.  "My favorite thing about dispatching," he says, "is being able to further connect with people at the college, and getting to play a role on the operational side of such a well-endowed flight school."  Hayes is in his third year as a member of the WMU chapter of NGPA (National Gay Pilots Association) and currently holds the office of vice president.  While the NGPA internationally works to diversify and to create a more inclusive aviation environment, membership has done more than that for him.  "I have been able to meet an unimaginable number of aviation professionals, peers from flight schools around the country, and industry recruiters," he says.  It hasn't always been that way in the aviation industry, as pointed out on the organization's web page:  "More than 30 years ago, a handful of gay pilots discreetly gathered at the tip of Cape Cod.  They had responded to an ad and all agreed to wear an aviation-themed T-shirt for identification purposes.  Anonymity was mandated -- no last names.  Or else they risked losing their jobs or being dishonorable discharged from the military." 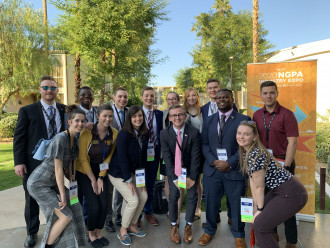 That was the first NGPA event.  Have things changed!  It is now a global movement.  Western has the distinction of organizing the second NGPA collegiate chapter in the nation.  "The NGPA family is a welcoming place for anyone and everyone," Hayes says about his opportunity both to make scores of life-long friends and valuable career connections.  As chapter vice president, Hayes plays a part in organizing meetings and publishing newsletters, all geared toward members moving on to successful careers in the industry.  He attends meetings of the Aviation Student Council, Women in Aviation International, and other related groups that abound at WMU. One of the recent fruits of his diligence is a $5,000 scholarship from the NGPA.  All of the above comes together in what Hayes says is "one of the biggest life lessons" delivered at Western.  "It is not necessarily 'what you know,' but also 'who you know.'  The earlier you put yourself out in the open, participate in student organizations and events, attend outings and programs hosted by industry professionals, and forge connections with people -- the better off you are going to be.  It is always said -- but yet maybe still not enough -- that aviation is a small industry.  You will be surprised how far just one connection can take you."  Recently finished with his commercial licenses, he’ll begin working on his certified flight instructor license in the spring of 2021.  After building additional flight time, Hayes hopes one of those valued connections leads to first-officer training with Envoy Air, formerly American Eagle Airlines and based halfway between Dallas and Fort Worth. Being affiliated with the largest regional carrier for American Airlines could be the stepping stone for a captaincy with the parent company, or even another of the "biggies."  No matter the logo on the airliner, Hunter Hayes will take with him into the flight-control area the pride of being a WMU Bronco.