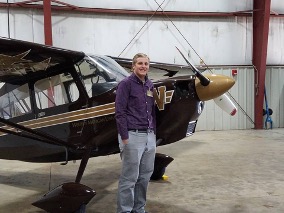 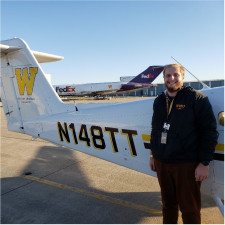 When airlines captain Michael Coldagelli packs his belongings for the next flight sometime in the future, he'll check for his toiletries, toothbrush, socks, workout gear, slacks, sport shirt and . . . golf discs.

That's because the native of Wisconsin, when he's not prepping for his future in the aviation industry, is a disc-golf aficionado, and the heck with a driver, nine iron and putter in approaching well-manicured greens.

In addition to being a fan of Bronco sports -- especially hockey and baseball -- the double-major, WMU College of Aviation student "loves being outdoors and playing disc golf" at the Kalamazoo-area courses, as well as those around southwest Michigan and back home.  The latter is in New Berlin, Wis., a western suburb of Milwaukee where about 40,000 folks reside.

Now in his senior year majoring in aviation flight science and aviation management and operations (with a business minor), Coldagelli says that "once I am able to travel all over the country and the world with an airline, my discs will be going with me." 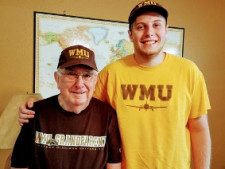 Coldagelli with his WMU Alumni and aviation executive grandfather

If anybody can be defined as a legacy enrollee in the WMU aviation program, it's Coldagelli.  His grandfather, Paul Harding, is a member of the Western class of 1954.  After his military service, Harding ended up as the executive vice president of marketing for -- where else -- Western Airlines, which, with its hub in Salt Lake City, functioned from 1925 to 1987 before it merged with Delta Air Lines.

"I always begged him to share stories of his time flying and working at the airlines," he says.  "He showed me models of the airplanes in Western's fleet.  My favorite is the Boeing 727.  Our program also has a 727 in its tech-ops fleet.  No doubt my grandfather planted the aviation seed in me."

Another bit of nourishment came from Jim Kostelyk, a United Airlines 777 pilot whom eighth-grader Coldagelli met doing a career project.  "We had a great time talking about what it takes to become an airline pilot and we still remain in contact with each other.  He's helped in making my dream a reality."

Coldagelli is also one of the many students and alumni who finalized their decision to choose the WMU program because of attending one of its aviation summer camps, which he did between his junior and senior year in high school.  "It was a great opportunity to experience what an aviation student does at WMU and sample what the school has to offer," he says.  "I knew I was going to come to Western right from the start.  I went on the rest of my college tours as a formality, and to make my parents happy."

If there was a "save-get" button to push on a computer keyboard so that a perspective or viewpoint would not have to be written every time, it would produce something like the following.  The words might be different, but not the opinion being expressed. Read what Coldagelli has to say: 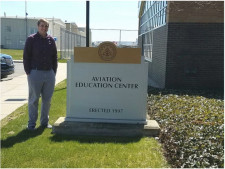 "The best thing about WMU is the people.  Everyone I have met either on the main campus in Kalamazoo or at the College of Aviation facility in Battle Creek has been so friendly and helpful to me.  The executives, faculty, flight instructors and classmates all have such great attitudes, and love to go above and beyond to help me succeed.  This place has felt like home ever since the first day I stepped foot on campus.  I love the Cirrus aircraft that we fly.  It's fun and has really helped me fine-tune my pilot skills."

Also adding to his skills and knowledge is the course in airline administration taught by professor Willem Homan who brings into the classroom his experience as a licensed pilot and these academic credentials -- doctorate in leadership from Northern Arizona University and a master's in aeronautical technology from Southwestern Oklahoma State.

"You learn to understand just how airlines function," Coldagelli says.  "The best part of the class was to simulate building our own airline.  We chose the aircraft, the routes, and the scheduling.  I'm proud to say I placed third in the class."

Part of the aviation program's regimen for future pilots is what is called a "cross-country flight," except that it is more regional in nature than spanning a continent.  That experience stays with many a Western student.  Coldagelli's was behind the stick of the fleet's Piper Seminole -- destination Lacrosse in his home state.  "On my way," he says, "I was able to fly over downtown Milwaukee and my high school in New Berlin.  It was really special to see my hometown from a new perspective.  It was one of my most awesome flights at WMU." 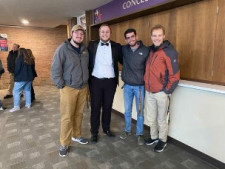 Coldagelli and his Bronco Buddies at Miller Auditorium

Another "new perspective" has come from his membership in the WMU chapter of Women in Aviation International.  "I now realize that the majority of pilots in this industry look like me," he says.  "I have met a lot of women pilots, and have really loved seeing their passion and dedication to breaking down the barriers and changing this industry.  I now have that same passion and dedication.  Plus we have some really awesome speakers come to campus."

Since January of 2019, he's flashed that passion and dedication as one of the program's aviation ambassadors in the college's Office of Recruitment and Outreach.  "I constantly get to meet new people and share with them my love of WMU," he says.  "I enjoy sharing my story with prospective students and their families.  I've also gained some solid skills and knowledge about the aviation field."

For Coldagelli, life at Western has been much more than being comfortable in the sky.  For more than two of his years on campus, he played tenor saxophone in the University Concert Band, allowing him to forge friendships with musicians and non-aviation students.  He's also been deeply involved in Western's CRU campus ministry.  The national organization is headquartered in Orlando, Fla., and up until 2011 had been known as the Campus Crusade for Christ.

With his eyes on the horizon, Coldagelli sees himself packing his bags -- complete with golf discs -- as a captain for a mainline carrier, and later possibly shifting into operational duties that reflect his second major.  But no matter where he is or what he'll be doing, he'll be packing his share of Bronco aviation pride.