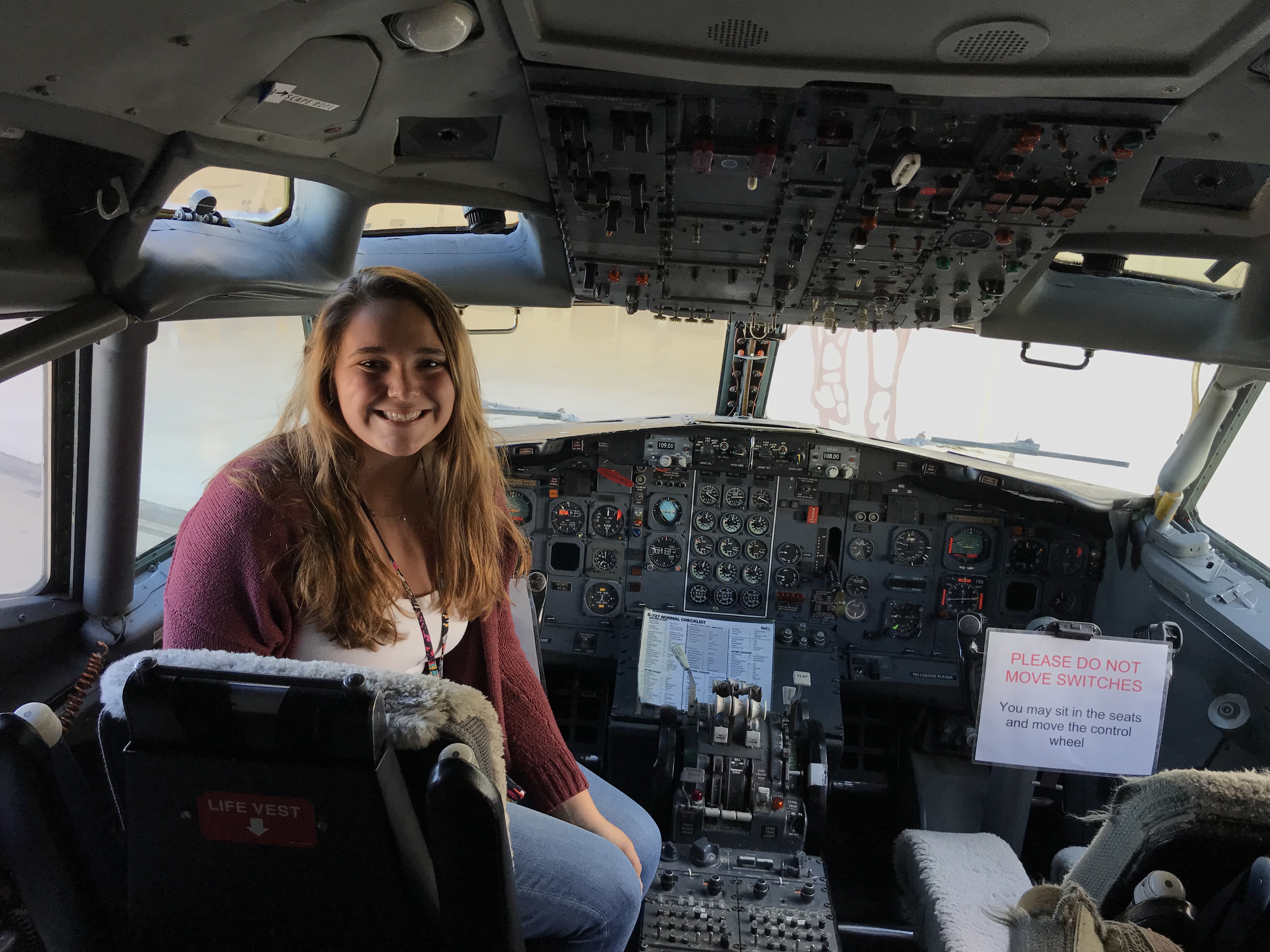 Alysse Matteson completing her first solo in a Cirrus SR20

There are some amazing aviation genes in the genealogy of Alysse Matteson, a third-year student in the Western Michigan University College of Aviation.

Little wonder that, while growing up in the small village of Elk Rapids at the northern tip of Michigan's Lower Peninsula, she and her father traveled to nearby Traverse City and that community's National Cherry Festival. Among the annual attractions were the Blue Angels and the Thunderbirds, the military service's precision-flight teams that, unknown to them as they demonstrated their tight formations way up there, they were helping formulate a career for a young child way down there.

"I remember watching them fly over West Bay in Traverse City," says the double major in aviation flight science and aviation management and operations.  "I was amazed by everything they could do.  When I was in middle school, my first impression was to become a flight attendant and be able to travel the world.  When I told my dad, he suggested that I go a step further and become a pilot.  To be honest, that never dawned on me as an option because I didn't know any pilots, let alone female pilots.  Once I looked into it, I knew that was exactly what I wanted to do with my life."

With that choice locked in, not surprisingly her career-development gaze focused on Western's aviation program in her home state.  "It was the right fit for me," she says.  "It was relatively close to home that I felt I could go back easily if I needed, but it was also far enough away that I could experience leaving home.  I love that the College of Aviation is small enough that you can learn most people's names and make actual connections, yet the university was big enough to experience normal college activities such as football and hockey games."

"Normal college activities" soon focused on joining the WMU chapters of Women in Aviation International (WAI) and Alpha Eta Rho.  The latter is the college fraternity that connects the aviation industry with educational institutions, guiding its members to successful careers.  She is the chapter's current volunteer chair.  "Both organizations have given me my best friends and great opportunities to network with aviation professionals.  Their advice is priceless." 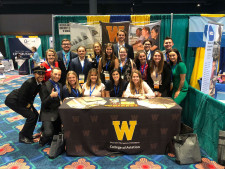 Matteson is the fund-raising chair for Western's WAI unit. Founded in 1990, the international organization is confronting these statistics.  Of the 700,000 pilots in the United States, less than 6 percent are female.  Little more than 2 percent of the 540,000 non-pilot jobs in the industry are held by women.  How does that stack up with the fact that a little more than 50 percent of the American population is female?

Because of her affiliation with Women in Aviation, Matteson has toured the headquarters of American Airlines' regional carrier -- Envoy Air Inc. -- in Dallas and took part in the group's national conference in Orlando.  She called both "one-of-a-kind experiences."

"As a freshman," she recalls, "I was very shy, but I still decided to run for the chapter's job as fund-raising chair.  I wanted to get my name out there and my foot in the door.  I enjoyed it so much that I ran for it a second time.  The confidence that experience gave me pushed me to run for the Alpha Eta Rho chair.  I have loved being able to lead donation drives for Loaves and Fishes and the Society for the Prevention of Cruelty to Animals.  I cherish the idea of Women in Aviation.  We need to always be encouraging more young girls to join the industry."

Which brings us back to Matteson's grandmother.  William T. Piper was an engineer in the oil industry before he took over in 1929 an aircraft-manufacturing company that was based in Bradford, Pa.  By 1937, the firm had moved to Lock Haven in that state because of a fire, and Piper was well on his way to becoming known as "The Henry Ford of Aviation." 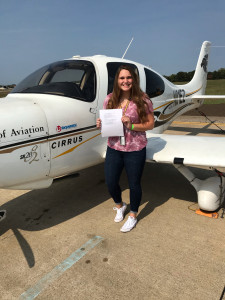 "Even though she was only 17 years old in 1946," Matteson says, "she was Piper's secretary and started taking flying lessons.  She was in a J-3 Cub for one session and the landing gear fell off after take-off.  She wasn't aware of that until she landed.  No one was injured, but the plane's wing was damaged.  This was enough for her to stop her training."

Once her granddaughter picked up flying decades later, her logbooks came into Matteson's possession.  "It was amazing to see that she was a woman in the aviation field at just 17 years old back in 1946, which was extremely rare for the time.  I wanted to finish my training for her.  If she could fight all of the barriers back then, there was no reason why I couldn't be able to do it now."

What if?  Could Grandmother Matteson have carved a niche for herself, as did Amelia Earhart, Jacqueline (Jackie) Cochran (the first female pilot to break the sound barrier) and the Mercury 13 women who in 1961 completed the same intense physiological training that their male counterparts did in qualifying to become the nation's first astronauts?

Matteson has sampled a taste of the environment those pioneers faced.  "When I came to college," she says, "I did not know a single thing -- technically speaking -- when it came to flying a plane.  It was extremely nerve-racking being surrounded by so many guys who already had their private-pilot license or had a lot of prior knowledge in aviation.  Although as soon as I began taking classes and flying, it didn't take long for me to be right back up there where they were -- knowledge-wise."

Helping her reach that status and comfort level was lead flight instructor Jim Whittles in her favorite "instrument ground" course.  "Even though the class went on-line halfway into the semester due to Covid," she says, "I loved how eager he was to teach.  He always made certain that students were paying attention because he's aware that the material we were learning would be a huge part of our future careers.  Even though he wore a mask, we knew he always had a smile on his face and you could always expect a yo-yo trick now and then."  In other words, in aviation, one must always pay attention -- or else.  So why not learn that essential in a class? 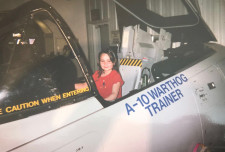 Some more "essentials" are coming Matteson's way, thanks to her recent hiring as a student dispatcher for the College of Aviation.  "While I am still training and learning all the ins-and-outs of the job," she says, "I know it will teach me a lot, allow me to learn new faces in the program, and give me a sneak peek of future careers if for some reason I could no longer fly."  She's not the first Bronco to sense the possibilities springing from this job.

No matter what the next step is, Matteson knows that assistance and advice will be readily available if she ever faces confidence issues or questions about "what's up with that?"  "My favorite part about Western is how supportive everyone is of each other.  Whether it's getting a flight slot, doing a solo, passing a 'prog' or stage check, or getting a new rating, there are always people you can reach out to for help.  They are sure to lead you in the right direction and are rooting for your success." 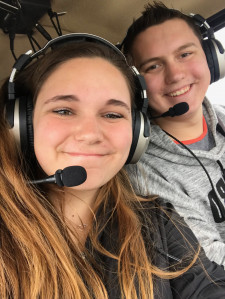 Right now, her post-graduation direction seems to be pointed toward becoming a certified flight instructor for the College and then to be accepted into Envoy's career-pathway program, which could be the genesis of Matteson joining a flight crew for passenger jets bearing the American Airlines logo.

For those who find themselves in the same situation that Matteson says she faced, she would offer this advice:  "If you feel like you do not belong because of not growing up in the aviation world," she says, "I would suggest that you stick it out.  You will soon realize that once you start flying, none of it matters because you will learn everything you need to."

That mirrors the attitudes and perspectives of Earhart, Cochran and the Mercury 13 women.  Just give us a chance, they asked.  If we're not up to snuff, we'll be the first to realize that and move one.  The same goes with those in other minorities.  All they want is a fair opportunity.  And don't we all.