Getting Underway and Unlocking Aviation Opportunity with Zach Orfin 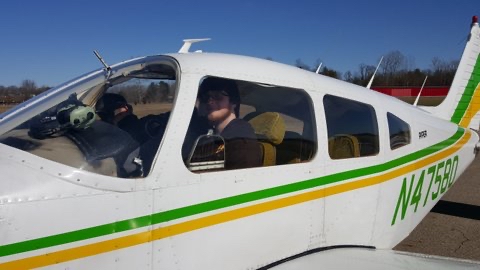 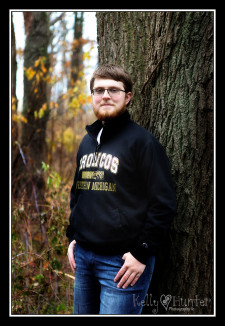 As a sailor, Zach Orfin mastered his way through and on top of the water.  As a College of Aviation student, he's soared amidst the clouds far above the solid ground.  There appears to be a third medium in his future -- space, the Final Frontier, in the words of Capt. James T. Kirk of the Starship Enterprise.  Now a third-year major in aviation management and operations (with a minor in accounting), Orfin believes he is on a path toward graduate school and a master's in what amounts to space mining.  Orfin is one of those rare up-in-the-sky breeds who started to learn to fly and took his first solo before he qualified for a driver's license.

Request WMU Aviation Information Orfin was raised about 20 miles south of Western Michigan University's home base of Kalamazoo in Schoolcraft, not too unlike the rural settings of Wapakoneta, Ohio, where astronaut Neil Armstrong developed his space legs.  "Early in life," he recalls, "my inspiration for aviation stemmed from video games, especially those involving some kind of flight with helicopters and jets.  As I got older, my interests in aviation shifted toward another side of the industry -- infrastructure/logistical and space.  These days, I spend my time marveling at our mass logistic hubs spread around the country and our budding space industry." 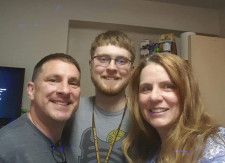 All of this was nurtured during his days at Schoolcraft High School and his involvement in the countywide Education for Employment initiative, through which he took part in the aviation program based at the Air Zoo Aerospace and Science Museum located near the Kalamazoo/Battle Creek International Airport.  That's where he learned a ton about the aviation industry, was able to dual-enroll in Western's introductory courses, and took part in the restoration of vintage aircraft at the Air Zoo -- one of that organization's fabled activities.  "Overall," he says, "it was a fabulous experience and the most influential part was the instructor, Al Holloway.  Aviation has always been a passionate part of his life.  When I initially expressed an interest in the space industry, he took time out of his day to send me articles about information and events I would have never known of.  I think he did that for all his students, not just me.  The constant awareness of the news in the industry led me to my current interests."  What led him to Western was the initial intent to become an airline pilot.  To him, WMU seemed like the logical choice because of its state-of-the-art facilities and national reputation -- on top of the fact that it was just up the road.  He'd also sampled what the program had to offer by attending one of the college's summer camps.  "As I progressed through my first year," Orfin says, "it became clear that the management side of the industry was my calling.  There was no need to transfer because Western handles that aspect of the business extremely well -- as well." 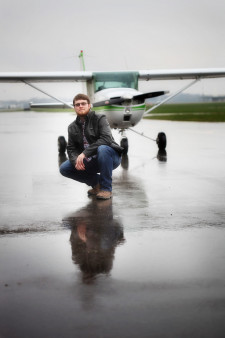 Orfin during his private pilot training

An indicator that he's made the right decision is his favorite course so far -- the one in airport management taught by faculty specialist Jessica Birnbaum.  "I love her teaching style," he says.  The course has "a perfect mixture of entertaining lectures, class interaction and informative videos." Even better, he says, "is that she treats her students as equals in the industry and helps us focus on our careers."  To his way of thinking, Birnbaum epitomizes what the College of Aviation is all about.  "My favorite part about WMU has easily been the sense of community.  The students and instructors always seem to be outgoing, willing to interact and help each other.  All this comes into play when taking a new class and the chance to make new friends."  During his three years at Western, those friends were not confined to aviation compatriots.  Prior to the Covid rampdown, Orfin was an active member of the Bronco sailing team.  "I originally joined because I loved sailing," he says.  "Because I love the sport, I wanted to learn as much as I could about how to get better.  I still sail regularly on my racing dinghy.  I love sailing almost as much as I love aviation."  There is also a different kind of frontier for Orfin when it comes to his second love.  "I am currently constructing my own wooden sailboat," he says, "although the journey is a long and difficult one."  And he is not exactly traveling at warp speed to get there either. 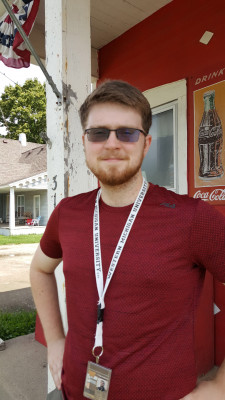 Proving that he is some sort of Renaissance Man, Orfin also possesses interests in blacksmithing, medieval history, stone masonry and carpentry -- the latter being a good choice when it comes to building a wooden sailboat.  More in line with his immediate future has been job-shadowing experiences with corporate, Michigan State Police, and Delta pilots, along with interactions with flight instructors and union representatives.  The corporate viewpoint proved interesting in that he "got an inside look into how that particular flight department operated."  Now what about his long-distant future? At the end of the first "Star Trek" movie, Chekhov asks Capt. Kirk about the next destination for the Enterprise.  The response: "Somewhere, out there."  Read what Orfin has to say:  "My goals after graduation are rather grand, but I would have it no other way.  I plan to get a job at one of the two spaceports under construction in Michigan.  If that doesn't work, there are other spaceports around the country.  My absolute dream job would be to work management or operations at a spaceport within the next 20 to 30 years, either on a space station or a planet."  Hey Elon Musk or Jeff Bazos!  Are you listening?