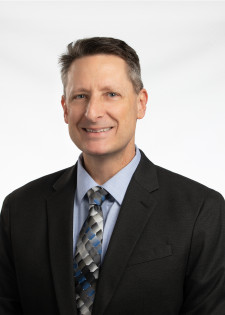 Dominic Nicolai has rubbed elbows -- and wings -- with some of the giants of the WMU College of Aviation in his 28 years as an instructor.

Such legends and College of Aviation Hall of Honor inductees as:

Plus, the likes of Joseph H. "Joe" Dunlap, who, as founding director of the WMU School of Aviation Sciences, shepherded the move of the program from Kalamazoo to its current base at what was then the W. K. Kellogg Airport in Battle Creek.

Nicolai might be in line for a Hall of Honor plaque of his own someday.  A flight instructor since his 1993 graduation from the WMU program, he has these achievements on his resume -- named FAA Flight Instructor of the Year for the Grand Rapids area in 1996 and garnering master-instructor status in 2008 from the National Association of Flight Instructors.

Nicolai ending up being a part of the Michigan program that trained him was not exactly a function of dead reckoning.  With diploma and future spouse Molly in hand, they decided to alter Horace Greeley's directional advice when it came to casting one's future lot.  For them, it was "Go south, young folks.  Go south."

"We knew some people in Florida," says Nicolai, who was raised in the community of Davison on the east side of Michigan near Flint.  "We were able to spend three weeks in the summer of 1993 looking for jobs the old-fashioned way -- pounding the pavement and making telephone calls.  I had also sent letters and resumes to airports from Daytona to Orlando to Vero Beach.  I also had the Aircraft Owners and Pilots Association directory to work with."

Phone calls to FBOs (fixed base operators), knock-on-the-door visits at airports, and chats with chief flight instructors yielded "nada," and lots of "thanks-but-no-thanks" results.  Summer in Florida is a lot like winter in Michigan when it comes to flying -- not a heck of a lot of it going on, plus Nicolai wasn't the only CFI (certified flight instructor) down in the warm south looking for work.  It was time to "Look Homeward Angel."

"I called WMU and talked with Tom Deckard," Nicolai recalls.  His message came through loud and clear -- "we need instructors NOW."  The message was received loud and clear.  "Molly was not having any luck finding employment either so we just finished our time in Florida like it was a vacation and returned to Michigan."

Nicolai as part of the International Pilot Training Centre Staff

Nicolai's first choice for higher education was Mott Community College in Flint.  While aviation had always been an adrenalin surge for him, he initially harbored plans to become an architect.  Then came one of those fork-in-the-road moments.

"During the summer," he says, "I was working for a swimming-pool company near Bishop International Airport in Flint.  Small commuters were buzzing in and out all the time that week.  While holding a shovel full of dirt, I realized that the passion was still very much alive in me.  How cool would it be to fly those airplanes every day."

Next came a meeting with a counselor at Mott to probe for aviation schools.  Western had the only four-year program in Michigan and Nicolai was not interested in going out of state.  He located Kalamazoo on the Michigan map, applied and was accepted.  "Interestingly enough," he says, "I never told my parents about any of this until WMU sent me an acceptance letter.  Then we had a long discussion."  In 1998, five years into his tenure with the aviation program, Nicolai added a master's in career and technical education to his credentials.  Familiar faces were in some of his classes -- fellow flight instructors Tom McLaughlin and Pat Langworthy.

Nicolai was not the only new face at Western's aviation program in the fall of 1993.  He was one of 20 new hires and eventually trained students in Cessna 150s, Cessna 152s, a Cessna 172 Skyhawk (for commercial-pilot instructions) and a Cessna 172RG Cutlass (for high-performance training).

Nicolai's picture of the College of Aviation's home in Battle Creek, Michigan

In 1996, with Dunlap at the controls of the program, Nicolai became the aviation program coordinator in the newly christened School of Aviation Science.  That position took him to high schools around the state with an emphasis on pointing women and minorities toward careers in aviation.  He and his colleagues both drove and flew to these destinations.

"It was fun flying the Cessna 150," he says, "but it really reinforced what was taught in ground school -- airplanes do not like ice, and stay away from thunderstorms.  Both of which were experienced on some of these trips.  The worst days in the C150 were when the winds aloft caused your ground speed to drop to about 60 mph.  You would look down at I-94 and see cars zooming past you."

For Nicolai, the "British Invasion" was not in the mid-1960s when the likes of The Beatles, The Dave Clark Five and The Rolling Stones brought their style of music and hairdos to the United States.  It's 1998 and sprouted with Dunlap's initiative to shift the WMU program to Battle Creek.  British instructors came to staff the new International Pilot Training Centre, attracting cadets from British Airways, Aer Lingus out of Ireland, and the United Arab Emirates Airline. Among the "native" instructors were Nicolai and McLaughlin.  But all that came crashing down with the Twin Towers in New York City on "9-11."

But all was not lost, according to Nicolai.  "Working with the British instructors," he says, "really elevated our knowledge and skill levels.  The comparison is with knowledge testing as the international students complete about 13 knowledge exams on their way to a restricted ATP (airline transport pilot) license."

Because of his WMU tenure, Nicolai primarily teaches advanced courses and gives end-of-course oral/flight exams to students.  "I really love teaching," he says.  "The commercial students are the most fun since they know a lot about flying.  This allows me to introduce practical applications in the classroom and with assignments.  I like to use group activities to introduce challenging questions.  The students get to help each other learn the material."

When it comes to delivering creative messages and information, Nicolai is kind of a Steven Spielberg.  "I am heavily invested in technology," he says, "and have developed many learning briefs for flight students.  I continue to use it for ground-school learning assignments.  With the computer, I can easily create scenarios and develop videos that help students apply what they have learned." 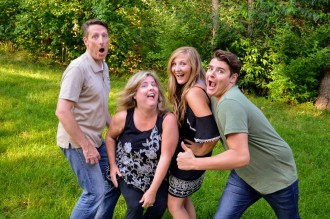 In Nicolai's world, the initial relationship between a flight instructor and a student is akin to a drill sergeant in the Marines and the recruits in "boot camp."

"You have to remember that a flight student's job during training is to kill the instructor," he says, "or do something to get the instructor violated by the FAA.  So, my long-term goal is to prevent students from either killing me or causing an FAA violation.  Someday I may even write a book -- '101 Ways to Kill Your Flight Instructor.'"

Joking aside, Nicolai admits to "pushing students to the next level.  If you think about it, a commercial pilot has the responsibility of many lives in their hands when they fly.  They need to be pushed to each next level throughout their training.  That way, when they get to the airlines, they are better prepared for the intensity of the training and the responsibility of the lives in the back of the airline.

"I'm sure many students have muttered unhappy thoughts about me while going through my ground-school class," he says.  "But all of them realize, once they get hired by an airline, that they were being pushed to the next level.  Alumni have returned to Western and told me so." 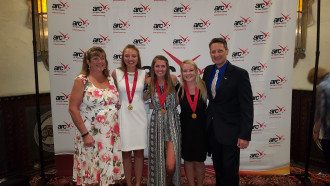 Like Monique Grayson, who was raised in Kalamazoo, graduated from the WMU program, and is now a first officer for Delta Air Lines.  "She still tells students here that I was the hardest professor at WMU, but that pushed her to be even better.  I love that, because she earned an 'A' in my course."

Of course, there is also Greg Sumner, one of Nicolai’s very first students.  Sumner has parlayed his alumni status from WMU Aviation into a successful career at United Airlines, where he is currently a captain, a member of the WMU Alumni Association Board and the Co-Chair for the National Gay Pilots Association.

In addition to his wisdom and experience, Nicolai interacts with students as an adviser to the WMU chapter of Alpha Eta Rho, the professional fraternity that links the aviation industry and higher-education institutions in pointing students to careers in the field.  The same with Western's team in the Air Race Classic, which is regarded as the epicenter of women's air racing.  Each year -- Covid willing -- students, teachers, doctors, airline pilots, business owners and professionals ranging in age from 17 to 90, engage in a 2,400-mile event -- to complete the "perfect" flight "cross-country," with the routes changing annually, and win the championship. 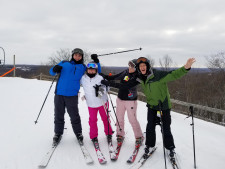 Nicolai and family having fun on the ski slopes

When he's not log-deep in his professional duties such as committee work as a faculty member, Nicolai skis, golfs, writes, travels (especially to Disney World in Florida) and, with wife Molly, watches the growth and development of son Max and daughter Riley, both WMU enrollees.  Besides operating behind the flight control of an aircraft, Nicolai is often seen behind the lens of a camera.  Sharing his love of aviation through his passion for photography is very often seen.  It is not uncommon to see the fruits of his photographic labors on the College of Aviation social media.

"Aviation is an adventure," he says.  "Traveling some place new is the most exciting part of it.  Aviation takes you places that you probably never would have traveled on your own.  It gives you a reason to go places.  Buffalo, for example, as part of the Air Race Classic."

Would life as an architect been just as attractive and fulfilling? Not for Dominic Nicolai.