The Determination of Doogan in Aviation Technical Operations 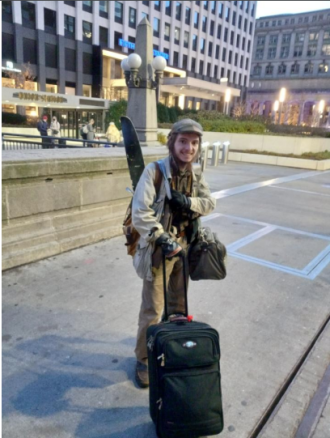 Call me Doogan.  If you are a whale of an avionics technician with a boat full of mechanical smarts, the aviation industry will call you whatever you want to be called.  That's the path Kyle Escher Doogan is on as a junior in the WMU College of Aviation's program in aviation technical operations.

Request College of Aviation Information "When I was setting up my WMU account," says the Chicago-area resident, "it asked for my preferred name.  Most people call me 'Doogan,' so I put that down, never realizing it would replace my first name.  I'm Kyle, but most folks call me 'Doogan.'"  While he's not yet a fully certified "tech guy" whose job it is to keep the giant "Moby Dicks" of the aviation industry swimming above the clouds, at Western he is a "Normie," one of the student staff under Norm Risk.  Risk is the supervisor of aviation facilities who maintains the college's facilities.  Doogan hails from the Illinois village of Roselle, a suburb west of "The Windy City."  Part of the progress toward his graduation from high school in 2020 was some "ground school" training, so to speak in regard to modes of transportation.  He completed two years worth of automotive classes at the Technology Center of DuPage in nearby Addison. 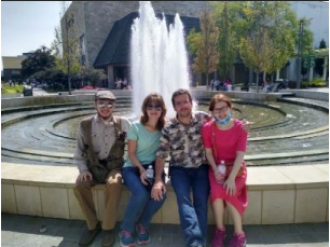 Doogan with his mother, father, and sister

Blessed with a mechanical mindset and a love of tinkering, Doogan, when it came to careers, began looking "up" for possibilities -- instead of horizontally along the ground.  He credits that to watching the "Indiana Jones" capers and the unrealistic "reality" TV show "Airplane Repo," which had its run from 2010 to 2015 and the premise of which is having repossession agents hired by financial institutions recover aircraft from deadbeat owners.  "Yes," he says, "I know it was fake, but it got me interested not only in adventure but aviation.  I soon realized that repossessing aircraft meant that I would need to have expert knowledge in flying and repairing aircraft."  Blipping on his radar screen were the aviation programs at Lewis University, Embry-Riddle Aeronautical University and Western.  The latter loomed as the best choice.  "WMU really was the Goldilocks for me," Doogan says.  "It offers the best of both -- a comprehensive program that didn't cost a pretty penny, and it isn't too far away from home."  Plus, no 80-percent humidity as in a Florida campus.  His "what-makes-things-tick" savvy channeled Doogan to Western's "tech-ops" program, but he someday would like to get his wings.  "I would love to own something like a Piper Cub and fly out in the bush."  But the immediate goal is to earn his A&P (airframe and powerplant) certification.  While he had briefly considered a military route toward that A&P, Western won the day because it "seems the most-guaranteed route to achieve that, and making good connections along the way." 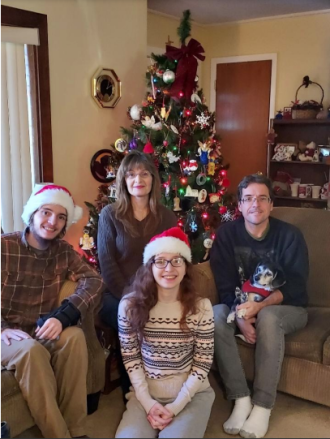 Doogan and his family celebrating the holidays

Helping make those connections is his membership in the WMU chapter of Alpha Eta Rho, the coed college fraternity that links the aviation industry and higher-education institutions to promote careers in aviation, aeronautical engineering and the aerospace sciences.  Admitting that at first he wasn't quite certain what a fraternity was, he began that learning process while on the chapter's tour of nearby Duncan Aviation.  It seemed like a good way to launch friendships.  He was right, and more.  Because of weekly meetings, Doogan has nourished camaraderie, been exposed to what the fraternity can do to promote networking, and introduced him to the assets available at the college's new $22-million Aviation Education Center

He also values the benefits of becoming part of Alpha Omega, a Christian devotional group on the Kalamazoo campus.  "I'm just so thankful for the friendships and connections I have made through these groups," Doogan says.  "I'm just not sure I would have made it as long as I did without them."  Doogan says he has applied for internships, but those on-the-job training opportunities are generally reserved for upperclassmen, a status of which he is still short.  Helping him get there will be more technical exposure, such as the lab course in aircraft structures led by Brian Jansen.  "That's where we do the most amount of hands-on work, which of course means the most amount of fun for me."  When not checking out his tool box, Doogan spends his time building model planes or trains, hiking, gaming -- even some gardening.  In the future, he would like to rebuild and repair vintage aircraft as part of his profession.  Doogan credits a trip he took at age 15 to Ireland with his father for catalyzing a perspective in life.  "I wasn't known for anything else besides being annoying," he says, and for also always having a pencil or pen in his hand.  Fate took them to a little shop in County Cork.  There he spied a "military-esque" cargo jacket.  It was the classic impulse purchase, and, like Tinkerbell waving some magic pixie dust over him, Doogan was transformed. 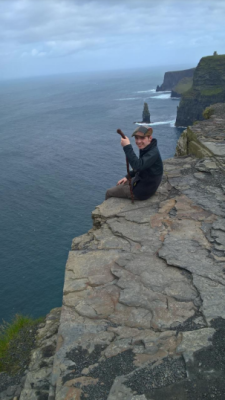 During his latest trip to Ireland, Doogan sitting on the Cliffs of Moher

"I envisioned the traveling Irish rover always ready for adventure," he recalls.  "Thereafter my personality kind of just clicked into place.  I shifted from an awkward, scrawny kid to an awkward scrawny kid who carries everything he ever needs, loves helping other people, eager to fix a practical problem, and always ready to start a new day -- as long as I have my coffee."  He still keeps the very same jacket tucked away in his closet, as it was quickly worn out, but now dawns a new, more durable one for all the practical purposes. To Doogan's way of thinking, aviation is similar to the financial world and to professional football in this way.  The CEO gets the headlines, but the administrative assistant staffs the day-to-day trenches that keep the enterprise afloat.  The quarterback gets the glory, but the offensive tackle covers their flanks and prevents a trip to the emergency room.  Then there is the relationship between pilot and the ground crew.  He says he's talked to some flight students who have questioned whether they should have chosen the "tech-ops" program.  They could choose dual majors, but that lengthens their days in higher education.  "Others say they want to fly more than to fix," Doogan says. "Commercial aviation emphasizes seniority so the quicker they are in the cockpit, the better." 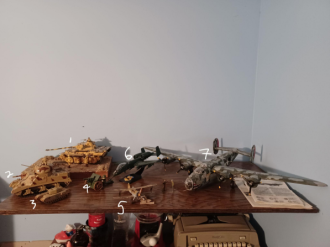 Not discounting those reasons, Doogan finds himself in the "team" mode as in the worlds of corporations and pro sports.  "Aircraft mechanics are just as important as pilots," he says.  "Both are equally responsible for upholding the world of aviation.  So do those involved with managing airports and airlines.  It's quite easy to glorify being a pilot, up there in the clouds, soaring toward a sunset, traveling the world, and walking toward a large machine with wings thinking about taking off.  It's harder though to glorify an oil change, replacing sheet metal, and figuring out complex wiring diagrams."

In aviation, there is mutual respect for what each person brings to the core mission.  Going back to pro football, the kicker can't make the Super Bowl-winning field goal - and relish in glory -- if the center doesn't make a good snap, if the holder fumbles the snap, and the offensive line becomes a sieve.  While all of us want a shot at glory, practicality should rule, Doogan believes.  Those high schoolers pondering a career in aviation "should look at their skillset.  If it involves tinkering and fixing, along with cognitive ability, they should lean toward the maintenance side of aviation."  And help those pilots reach for their "glory."