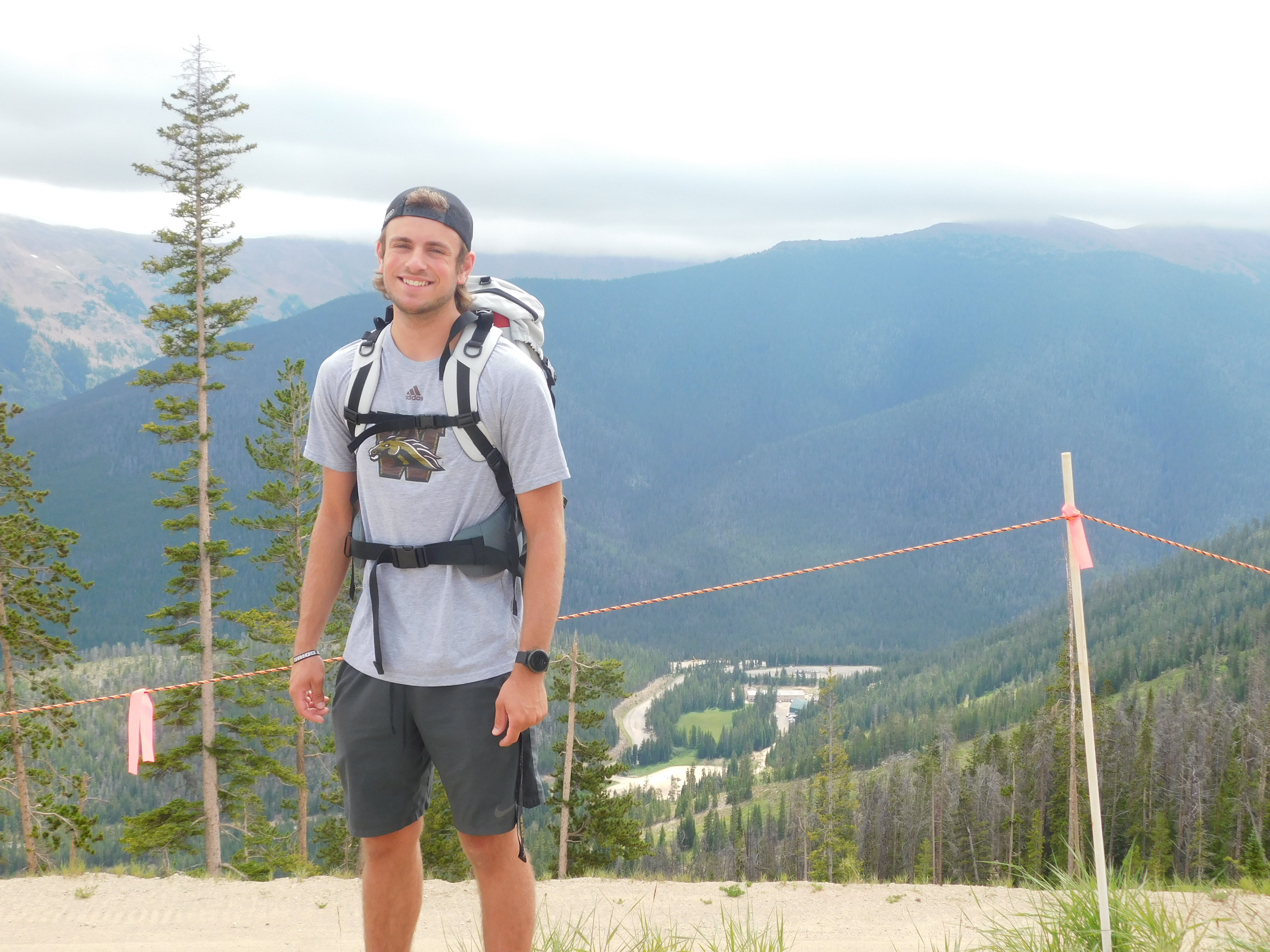 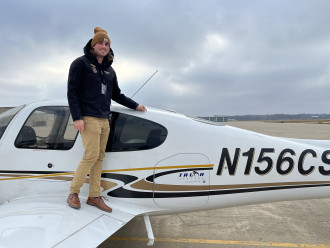 He is an "Ultimate Frisbee Guy."  He has a warm spot in his pilot's log for "Warbirds" -- Spitfires, Mustangs, Zeros, Hellcats, Thunderbolts, P-40 Flying Tigers, Messerschmitts -- whose aerial dogfights in World War II were its version of medieval jousts with fatal consequences.  He has a hero and role model: Rob Holland, the Babe Ruth, Michael Jordan, Tom Brady and Wayne Gretzky of Holland's competitive activity -- aerobatics.  He is a card-carrying member of the Lawson Lunatics, the dependable and fanatical band of Western students who literally raise the arena's roof in support of the Bronco hockey team.  He is Scott Fish, a senior with a dual major in aviation flight science and aviation management and operations at Western Michigan University. 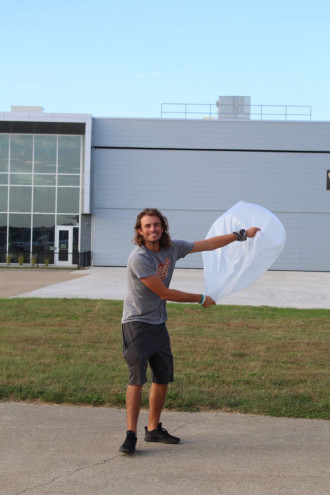 Fish working "line" at the College of Aviation, doing his best as the "air sampling manager!"

As a team leader, he supervises such duties as pulling the college's fleet of aircraft out of the hangars in preparation for the day's flying and reversing that process for most of them when the sun goes down.  They make certain the fuel tanks are topped off as well.  These "lineman" also shovel snow, keep the lawn in calendar-book shape, and help stage events, such as the dedication of the new Aviation Education Center in October of 2021.  "I love coming to work each day and not really knowing what the day will bring," he says.  "While it can be stressful, it's awesome to be able to work with Western's great students and faculty.  I really enjoy seeing how my actions allow the College of Aviation to function, and reach its -- and our -- goals."  Fish, a 2018 high-school graduate, hails from Sun Prairie, Wis., a suburb of the capital city of Madison in the south-central part of the state.  With an uncle and grandfather both serving in the U.S. Air Force, Fish had an early inkling to look toward the sky.  Amplifying that was regular attendance at the annual EAA AirVenture -- The Spirit of Aviation, the air-show extravaganza that attracts folks from around the world to nearby Oshkosh.  That's where he got up-close-and-personal with the "Warbirds."  A "surprise" gift at the air show pointed him toward a career in aviation.  His two familial mentors booked him for a flight on a "Tin Goose," one of the 199 Ford Trimotors built by the automobile icon's company between 1925 and 1933 in a failed bid to become part of the growing field of aviation. 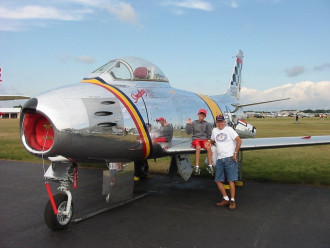 Fish and his grandfather at EAA AirVenture in Oshkosh, WI - the place where aviation "clicked for him"

"Something clicked," Fish says.  "I will never forget my grandfather smiling at me.  I saw the joy that aviation brings to people and the experiences it allows you to partake in.  It was a community that I knew I wanted to belong to.  Ever since then I have gone above and beyond to learn more about flying, and spreading the joy it brought to me so many years ago."  "Learn more" equated to taking his high school's lone introduction-to-aviation course.  Checking out aviation programs around the nation, Fish encountered only one limitation -- any place but Purdue University because the senior Fish indicated in no uncertain terms that his son "would never be a Boilermaker."  Western's program won out because "it was so welcoming and inviting," Fish says.  "I remember getting an e-mail from my (student) ambassador, checking whether I had a good time on my campus visit.  I sensed the atmosphere surrounding the program.  Everyone involved wanted you to succeed."  The fact that Fish once played for Western's Ultimate Frisbee team ("loving every second of it") and is an avid skier and snowboarder (as a member of Western's club for those winter sports) shows he is no shrinking violet when it comes to experiencing what life has to offer.  When there is no snow on the ground and he's not polishing his Frisbee skills, Fish will be mountain biking or in a canoe in pursuit of finny denizens large enough to pull him around a lake.  One Western experience energized his outgoing personality. 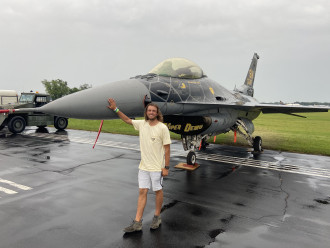 Fish at EAA AirVenture working with the F-16 Demo Team

"On the first day of my geography class," he says, "the professor, Dr. D, asked the students who had not eaten breakfast that morning to raise their hand.  I was the only one brave/dumb enough to do it.  She proceeded to roast me for the next 15 minutes and kept it up in subsequent sessions.  Until I started to dish it back.  One day I brought breakfast to class, even though the class started at 5 p.m.  We developed a strong relationship and continued to talk afterward.  She got me out of any shell that I might have been in, and showed me it was OK to be myself."  Being himself makes it easy to serve as the "initiate member master" for Western's chapter of Alpha Eta Rho, the international fraternity that links the aviation industry and institutions of higher education.  Its activities "bring people together for a good time" and for priceless networking opportunities.  Additional networking became available via his favorite class -- corporate aviation management.  The instructor was Roger Salo, current chair of the Michigan Aeronautics Commission whose resume includes working for the Michigan-based MASCO Corporation's operations at the international airport serving the Detroit area.  "It didn't feel like a class at all," Fish says.  "He did an excellent job creating discussions, which introduced us to concepts that showed how corporate flight departments work." 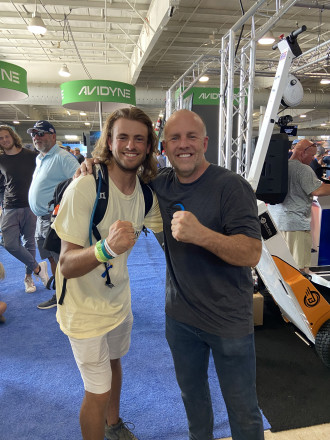 Fish meeting one of his idols - Mike Patey

If Salo is something of an idol, so is Holland, who has been an air-show pilot since 2001.  An honorary member of the Navy's "Blue Angels," Holland is known for creating aerobatic maneuvers never seen before. "As a kid, Holland (a 10-time national aerobatics champion) fascinated me with what he could do with a plane.  I would like nothing more than to try and fill his shoes as the next great stunt pilot."  Ranking No. 1 in Fish's all-time Western memories is being a Lawson Lunatic -- "No question, Bronco hockey 210 percent.  Growing up playing hockey was fun," he says, "but watching WMU hockey is a whole new level.  It should be mandatory that every Western student attend at least one hockey game before graduating." 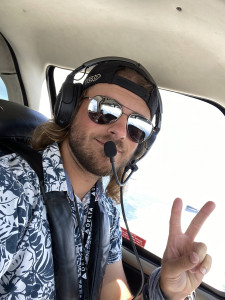 In second place is Fish's first solo.  "As I was landing," he says, "the tower warned me a coyote was on the runway, and the dude was running straight at me, which is not what I really needed on my first-ever solo.  But it was kind of fun maneuvering around the guy and telling the tower 'coyote in sight at 11 o'clock.'"  In sight in his future is nothing specific, he says.  "I fly for whoever hires me.  I do not yet know if airlines are for me.  Just as long as I fly, I will be happy.  Back-country flying does appeal to me greatly.  I could see myself someday in a Quest Kodiak (a high-wing, unpressurized, single-engine turboprop) or an Air Tractor (used for agriculture, firefighting and other utility applications)."  And, maybe, Rob Holland is looking over his shoulder but hopefully not in the middle of an Immelmann turn.