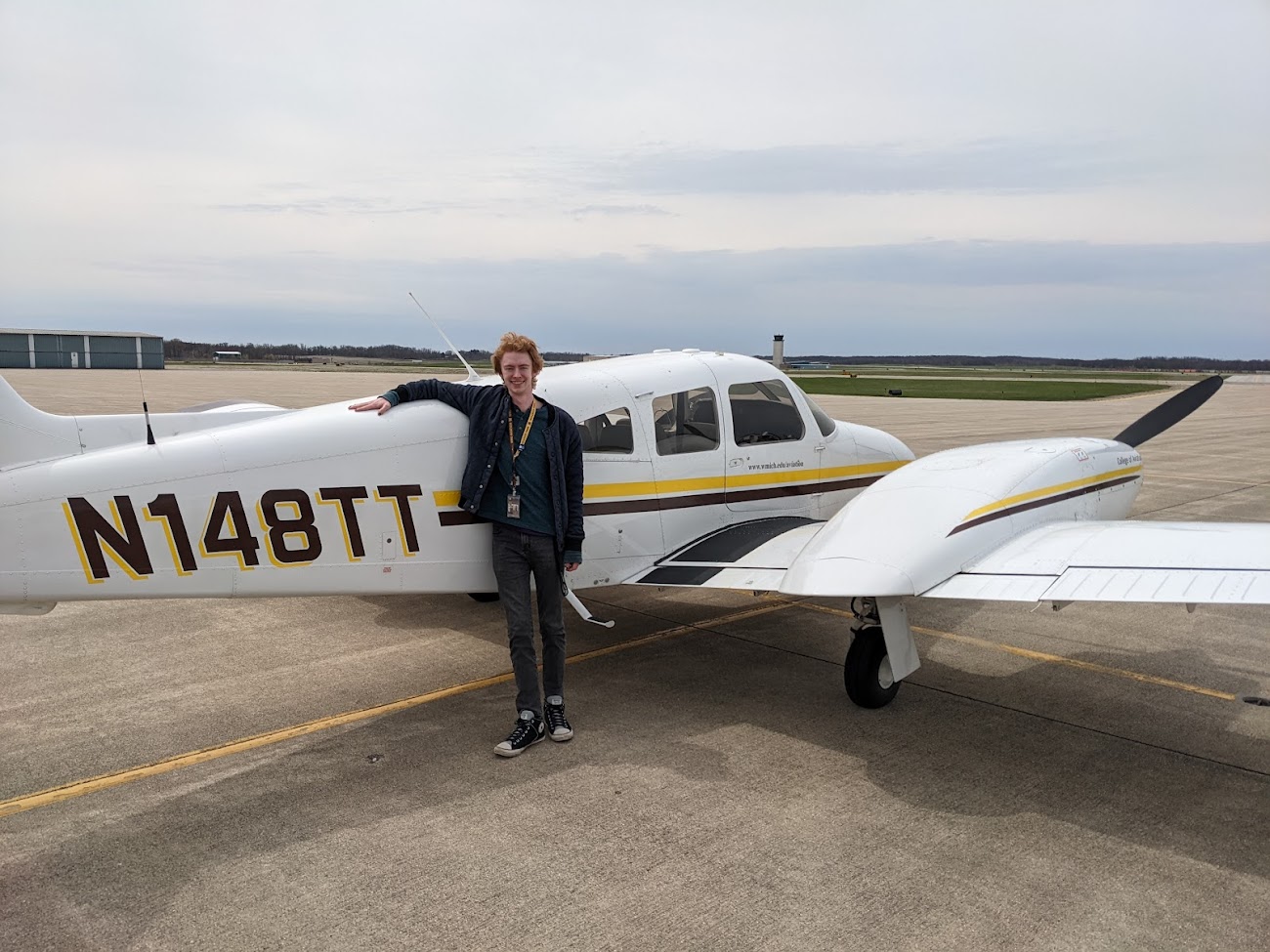 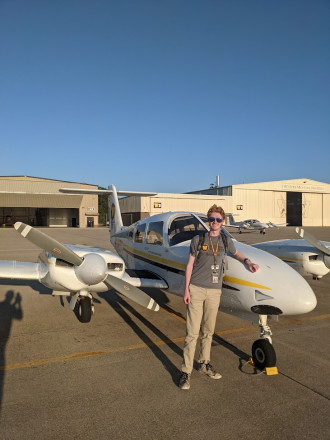 Growing up northwest of Boston near the New Hampshire border, for Patrick Lambour the worlds of airplanes and airports were always music to his ears.  Today, as a senior majoring in aviation flight science at the Western Michigan University College of Aviation, they still are.  But airports and airplanes have been joined by . . . music.  Lambour graduated from Chelmsford High School in the spring of 2018.  The community of Chelmsford is "a 35-minute drive from Boston," depending on the traffic.  And there always seems to be traffic, enough that an air-traffic controller might be warranted.

Request WMU College of Aviation Info Lambour's affinity for aviation originated with his first commercial flight as a child.  "I really enjoyed the whole airport environment and seeing all the planes taxi-ing to their gates," he says.  A window seat provided the majestic view of the wing and its outline against the horizon.  "I was mesmerized watching the flaps being extended during take-off and landing.  That impact on a kid was never lost.  I knew I wanted to be a pilot right then."  His career path was already charted.  To this day, he still tries to grab a window seat on commercial flights back home.  Even though Chelmsford High offered no aviation-related courses or extra-curricular, Lambour never lost his zest, thanks to a couple of flying-minded buddies -- one of whom belonged to the Civil Air Patrol, the federally charted civilian auxiliary to the Air Force.  In high school, Lambour, after a couple of intro flights, started qualifying for his private-pilot's license through the East Coast Aero Club, the largest flight school in that part of the nation.  One of its bases of operations is the Nashua, N.H., airport located about 25 minutes from his home.  In addition to heading there almost every day after the school bus dropped him off, he took to the air on weekends as well. Lambour's first solo was in a Piper Warrior III.  Many of the flight school's fleet of training aircraft had been part of the aviation program at the University of North Dakota. 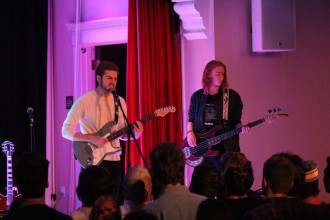 He completed the lion's share of required flight time there, earning the license after his freshman year at Western.  Since then, he has added his instrument rating, commercial multi-engine rating and is moving toward the commercial single-engine add-on.  Almost as enjoyable as a finely tuned aircraft engine, in Lambour's opinion, is a finely tuned guitar, although as a middle schooler back in Massachusetts, his first instrument of choice was a trombone.  But what he really wanted to play was an electric bass, and he has for about a decade.  Playing in the school band, he says, "allowed me to understand the musical theory of everything" and that nourished his bass playing. 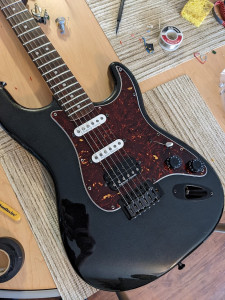 One of Lambour's personal guitars, with modified interior electronics completed by him

The future pilot played in a rock-ensemble group, had a band with high-school friends, and found himself on a stage now and then.  He's dabbled in writing "synth-wave music," especially "electronic drumbeats and bass lines.  Synthesizers just sound cool."  Since arriving at Western, he's purchased a six-string electric guitar.  Self-taught, he likes the 1980s licks of Judas Priest and Motley Crue.  All of this has spawned an interest in simple electronics and woodworking.  Who knows?  Someday a Lambour guitar might be as valued as a Gibson.  So what lured Lambour away from the home of the Red Sox, Celtics, Bruins and nearby Patriots?  It was one of those large college fairs that was held in Boston, which resulted in a conversation he had with Tom Thinnes, the College of Aviation's director of recruitment, outreach and marketing. What he heard increased Western's prospects of landing Lambour up to the level of nearby Bridgewater State University and Purdue University.  "It was really hard to ignore the industry reputation that Western has," Lambour says.  "It's large fleet of Cirrus and Seminole aircraft was very intriguing.  The advanced Avidyne glass cockpits were a big seller.  The aviation ambassador who gave me a tour did a really good job, and also piqued my interest in becoming a future ambassador.  I also picked WMU over Purdue because the main campus in Kalamazoo seemed a little quieter and more humble than downtown Lafayette (in Indiana).  That better suited my lifestyle." 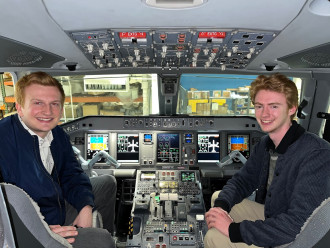 Once Lambour donned Western's brown and gold, he did follow through on his inclination by joining Thinnes' staff of ambassadors in his sophomore year.  "It's really good to share the interest I have in the program with prospective students because I was once in their shoes," Lambour says.  Ambassadors are also on duty when the college stages its annual golfing fundraiser and the yearly Aviation Outlook Day.  The latter generally attracts 50 companies wearing their recruiting hats who make pitches to the current corps of majors about career opportunities, some of which the students may not be aware of.  That's what happened to Lambour.  He recalls dialoging with the managers of the Battle Creek Executive Airport at Kellogg Field, home of the college's facilities.  "It was insightful," he says, "to learn about its operations and how they connect to Western's.  For example, I never had thought about wildlife management and how important it is to keep animals away from the airport environment."  In addition to his ambassadorial connections, Lambour is active in the WMU chapters of Women in Aviation International and the National Gay Pilots Association.  He's also had ties with the Airline Pilots Association Aviation Collegiate Education Club (ALPA ACE) and the American Association of Airport Executives (AAAE).  The networking contacts are priceless, he believes, and will help shape his career in aviation, whether it's connecting with Western's flight instructors, recruiters from Republic Airways, pilots from Northern Jet, or the always-busy air-traffic controllers at Battle Creek Executive Airport. Thanks to these memberships, he's toured Republic's headquarters in Indianapolis and the Delta Air Lines hub at Detroit Metro.  "It's important," he says, "to help represent diversity in aviation because it is so dominated by one demographic.  Anyone can be a pilot, regardless of who they are.  These organizations can inspire others to realize this as well." 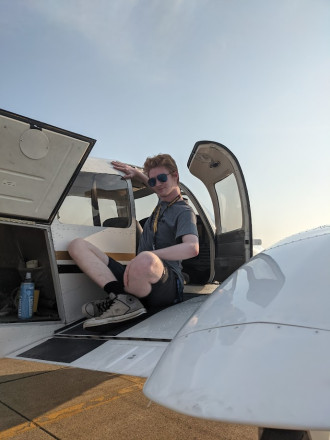 Lambour enjoying a nice sunny, summer dat at Battle Creek on the wing of a WMU Seminole

Advancing Lambour on his path to adding to that diversity is instructor Dennis McFall's LOFT (Line Orientated Flight Training) course, the major part of which brings Lambour into contact with the college's fleet of flight simulators -- where he can practice standard operating procedures and experience the sensation of flying while not leaving terra firms.  "A lot of it," he says, "is focused on communication and crew-resource management as much as the actual flying.  By the fourth session, my partner Shane Rembold and I were able to fly two legs as pilot flying and pilot monitoring without Dennis having to tell us which buttons to press or when to execute a procedure.  It was cool to be able to do that after just three sessions of practice."  Another favorite is the instrument-rating course because of the precise procedures required for approaches, clearances, and flight plans.  "You learn what to expect on your approach to an airport and you learn exactly when you have to do certain procedure, checklist and configuration changes in the aircraft," he says.  "I find the methodical nature matches well with how I go about my own life."  As Lambour approaches graduation, he has his radar set on completing training as a certified flight instructor so that he can join Western's training staff to expand his resume.  Recently, he was successfully admitted to Republic's RJet Cadet program, and is awaiting notification on his Propel application, Delta's similar career-path initiative for expanding its squadron of competent pilots.  While the uniforms of Delta or JetBlue Airways might someday be in his future, Lambour's initial target, after his stint as a flight instructor, is Republic, a regional enterprise that has connections with the major airlines.  With a fleet of Embraer 170s and 175s, Republic operates seven hubs, one of which is in Boston. 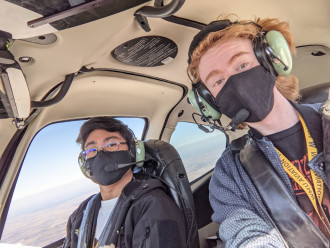 "I've talked to several people who really enjoy Republic's environment," Lambour says.  "It also has the quality of life that I look for in an airline.  It operates in the eastern part of the United States and is the only regional airline connected to Delta, United and American that has a base in Boston.  Being from the East Coast, I would prefer to stay around that area, but I also like some of its other hubs, including the headquarters in Indianapolis."  When Lambour plotted flight plans for one of his commercial cross-country flights, he chose one with a personal twist.  It flew south of Toledo, followed the coast of Lake Erie, and landed at the Buffalo Niagara International Airport.  That roughly is the same route he takes when he drives home to Chelmsford.  The difference is that the roadway was 5,000 feet below.  During another cross-country, he and co-pilot Michael Bellosillo headed to Champaign, Ill.  As he flew over Purdue's campus, he waved to the Boilermakers below who almost were his classmates.  Now that was some sweet music to a young aviator.