Josh Blain: Networking, Navigation and his Expedition to Envoy Air 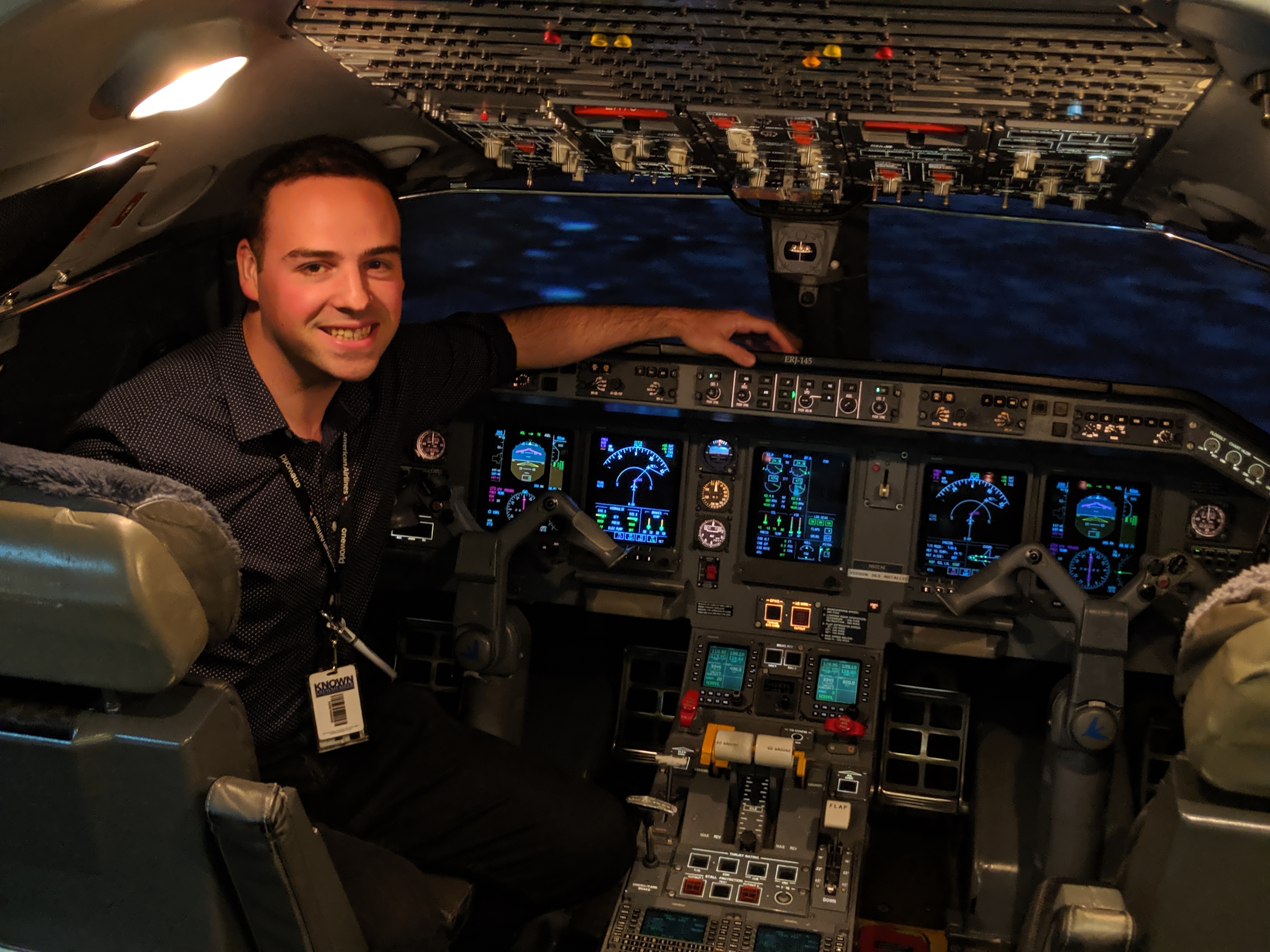 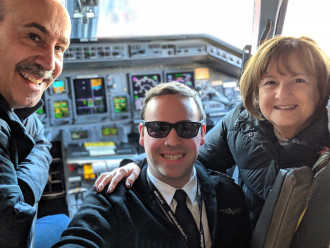 Josh Blain's advice to those who want to follow him into a career in aviation is to get a passport or update the one you have.

His document recounts adventures and generates memories of London, Rome, Paris, Milan, Switzerland, Barbados and Mexico City, all of which complement his other travels to many of the exquisite destinations in the United States.

Blain's diploma in aviation flight science was awarded by the Western Michigan University College of Aviation in 2014, a symbol of the wisdom he showed in warming to the sales pitches in the "Pure Michigan" messages on TV.  He hails from Skokie, Ill., and graduated from Niles North High School in 2010.
Request Information about the WMU College of Aviation
Because he was raised in Chicagoland, family travel often took him to O'Hare, which he credits for his inaugural love of planes and flying.  Another factor is the Explorer Scouts' aviation program in which he was involved in high school.  He remains in contact as a volunteer with what is now called the Boy Scouts of America's Learning for Life career-education initiative

Western was his choice because "I wanted a quality education in aviation in a traditional college experience," Blain says.  "I liked how WMU had the Cirrus SR-20 aircraft and was in the forefront of technology.  I also wanted a school with college sports and not necessarily my experience being all about aviation.  Being within a few hours of Chicago was another plus." 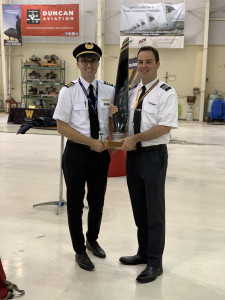 Not too long after coming to Western's campus in Kalamazoo and seeing the college's expansive base of aviation operations in nearby Battle Creek, Blain got involved in padding his resume by becoming an ambassador for the program.  "The job allowed me to come out of my shell and learn how to better communicate with others," he says.  The first of his networking opportunities led to others.

One was membership in Alpha Eta Rho, the co-ed, international fraternity for aviation students that serves as a liaison between educational institutions and the industry.  Formed in 1929, it has 90-plus chapters around the world and the Western unit is one of the largest. Serving on the college's Aviation Student Council qualified him to be part of the Western Student Association.  These experiences forged friendships that still survive in his post-college years.

As with fellow College of Aviation alumni and their employment searches, the ink wasn't even dry on Blain's diploma when that first job came -- and he went home to take it.  He served as a certified flight instructor for the 30-year-old Windy City Flyers based at the Chicago Executive Airport.  In addition to teaching folks how to pilot the Cessna 172 and Cessna 182, Windy City offers aircraft-management services and helps companies and individuals purchase the "right" airplane.  Some of his students went on to enroll in the WMU College of Aviation, which is one of the best ways to give back to the program that polished his talents. 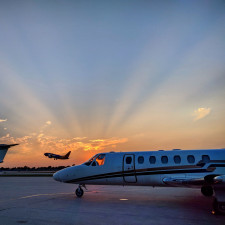 Next stop was Red Wing Aviation that is headquartered in Bay City, Wis., 50 miles from Minneapolis.  Another 30-year-old enterprise, it offers jet charters, pilot training, and aircraft management and maintenance.  What he had learned at Western was being applied "in the real world" at a different level.

"I learned how to operate in a crew," Blain says, "and fly a turbine aircraft.  I was the only one in my crew who had previously flown a glass-cockpit airplane and flown an airplane with autopilot."  It was also kind of "Home Week" for Blain at Red Wing.  The director of training was his flight instructor at Western, and there were other WMU grads on the payroll there as well.

The "bennies" started to accrue at Red Wing.  The charters he flew often featured "celebrities" in the passenger section.  Just as "cool" were the destinations and their airports -- The Hamptons, the Ocean Reef Club (a private island in the Florida Keys), Grand Cayman, The Bahamas, Aspen for the ski crowd, Jackson Hole in Wyoming, private game ranches in Texas, Nantucket, and Teterboro, which is New York City's oldest operating airport (1919) located in nearby Bergen County, N.J. 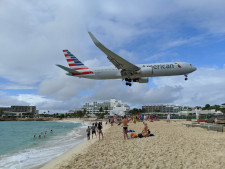 This level of experience qualified Blain for his current duties -- first officer for Envoy Air, a 14,000-employee subsidiary of American Airlines that was formerly known as American Eagle and is headquartered in Irving, Texas.  As American's largest regional provider, Envoy has hubs in Chicago, Dallas, Miami and New York City, and today flies the products of the Brazil-based aircraft manufacturer -- Embraer -- that was established in 1969.

Flying out of Chicago, Blain has jetted into the same airports -- Grand Rapids, Traverse City, Lansing, Flint, Fort Wayne, Toledo and, of course, Kalamazoo -- as he did as a Western student pilot. On one occasion, he flew the WMU women's volleyball team back to campus.

"I always loved the Kalamazoo overnights," he says, "because I could catch up with friends." Those encounters often produced stops at The Beer Exchange, Shakespeare's Pub, Sweetwater Donuts, and other favorites from his college days.  More recently, his visits to Kalamazoo and Battle Creek were to represent Envoy at the college's Aviation Outlook Day and to take part in new-student orientation activities.  "So, I have come just about full circle."

In completing that circle, Blain often reflects on his Western days and how his career all came about. Lead flight instructor Dominic Nicolai's course in "commercial ground school" rates high.  "It was a challenging class, but I believe I learned the most from it than from any other, and that's saying a lot.  I could really tell that Dominic loved teaching it." 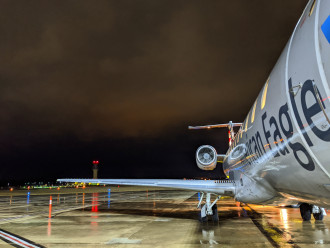 His flight instructors, including the one who hired him at Red Wing, rate five-star billings because of the quality of the training they offered.  Also earning a mention was his "great boss," Tom Thinnes, the director of outreach and recruitment for the College of Aviation, despite that boss' allegiance to the Cincinnati Bengals -- "a subpar football team."

And speaking of football, the WMU Broncos undefeated season in 2016 and trip to the Cotton Bowl are etched in his psyche as life-long memories.  "I used to wear a College of Aviation lanyard that season and that would always attract comments," he recalls.  A more personal milestone is when he took the stick of "the Super Cub" for seaplane training.

All of which makes Josh Blain another of the true believers when it comes to passing on the message about this kind of career.  "It's such a fun job," he says.  "Of course, there is the travel.  But no day is ever the same.  And the view is always amazing."