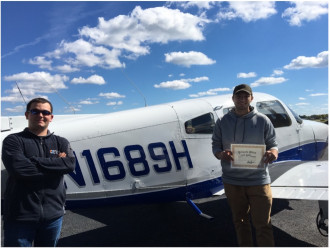 Was Shane Rembold, a fourth-year student in the WMU College of Aviation, born to fly?  There is maybe a gene or a DNA strand testifying to that.

His father was a pilot for U.S. Customs and Border Protection, the largest law-enforcement agency in the Department of Homeland Security and, with about 60,000 employees, its primary border-control organization.

But why did he choose Western?  The quality of the aviation program has something to do with it, and so did his sister.  "She was enrolled in the nursing program and had only good things to say about WMU as a whole," says Rembold, a double major in aviation flight science and aviation management and operations.

Rembold was born in San Angelo, Texas, in the west central part of the state and then, at the age of 4, moved to Columbia, Md., located about equi-distant from Baltimore and Washington.  After another four years, the family relocated to Rochester Hills, a part of the Metro Detroit region.  That's where he graduated from Stoney Creek High School in 2017, about the time when his father retired from public service. 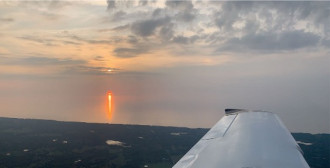 Sunset from the flight deck of a Cirrus SR20

The fact that the senior Rembold flew for the feds and eventually assumed administrative duties for the agency nurtured his son's yen for aviation.  Before coming to WMU, Shane had already added a private-pilot license to his credentials -- doing so at DCT Aviation based at the Oakland County International Airport near Detroit.

During his sophomore and junior years, Rembold was given a good dose of what the aviation industry is all about by working as a student assistant in the office of Dave Powell, dean of the college.  "Working in there," he says, "gave me some good insight into how a program is actually run.  It was cool to see how that related to my major in operations and management."  Another glimpse of reality is coming from his duties as a program student ambassador.  "This has familiarized me with what the entire College of Aviation program is all about."

Up until his aviation-related duties and academics plugged up his free-time schedule, Rembold was a member of the Skydive Broncos, a student organization that promotes the sport of falling from the sky in a controlled manner.  "I had always wanted to skydive since I was a kid," he says, "and I figured this was the perfect opportunity.  I did five jumps but had to step back from it in the past few years."  Rembold says sky diving to him constituted the next level up from riding roller coasters and getting "that pump of adrenalin." 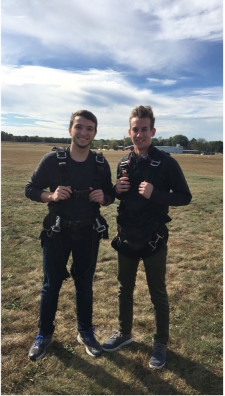 Rembold and fellow SkyDiving Bronco after a jump

He gets other kinds of kicks just being a part of the Western program.  "I love being around a bunch of people who are very interested in aviation," he says, "and who share my hobbies and interests -- running, skiing and playing video games."  Another favorite was the instrument ground class taught by lead flight instructor Jim Whittles -- "a great teacher who made the class interesting and engaging."

One of his best memories so far has been his instrument course's "cross-country"-flight requirement.  "I chose Traverse City (in northwest Michigan) as my destination," he recalls.  "My instructor and I ate dinner up there and got a free ice-cream cone from the FBO (fixed base operator).  We had developed frost on our wings, and it would reform when we scraped it off.  We had to get the plane sprayed with glycol, which was a really unique experience." 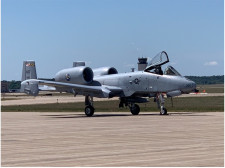 And how about this for unique!  On homecoming weekends, Western alumni will stop by the old fraternity or sorority sporting a flashy sports car or the the latest SUV.  But at the College of Aviation, current students can exchange stories with Bronco grads piloting an F-22 Raptor, the Air Force's stealth tactical fighter, or an A-10 Warthog, the ground-attack aircraft developed for combat support in the Vietnam War.  Those are among the unique visitors to Western's aviation facilities in Battle Creek that Rembold has experienced-- and at any time, not just for homecoming.

Plus, every once in a while, an airline will bring in one of its latest people-(or cargo)-hauling jets where students can check out the brains of the operation -- the flight-deck.  To the uninitiated, the latest cockpits and their dash-board complexities give the impression of what it's like to look under the hood of the latest techno car for the first time or what's inside the shell of a typical computer.  The typical reaction of the neophyte – What is all of that stuff??

But no sweat for the likes of Shane Rembold and his colleagues.  It's SOP (standard operating procedure) for them.

After graduation, Rembold will be focusing on qualifying for his CFI (certified flight instructor) rating, build up his flight-time, and begin moving toward the dream job -- a captaincy in the Delta or United fleets.