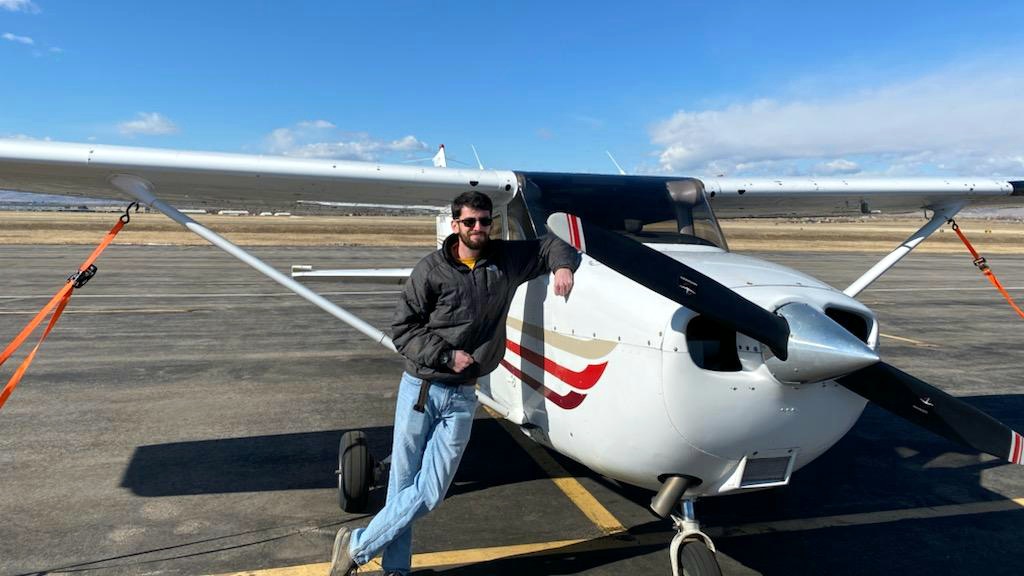 As a euchre aficionado, Brendan Slusser knows that one of the fairly simple card game's most exciting moments is when you can say, "I'm going alone.”

But "going it alone" is the antithesis of what is SOP (standard operating procedure) in the aviation industry -- which he says is one of the most important lessons that the December 2020 graduate of Western Michigan University learned in his favorite course: "Line Oriented Flight Crew Simulation" team-taught by College of Aviation instructors Stephen Hasenik, Dennis McFall, Ed Kudzia and Vladimir Risukhin.

"The class gives you that first glimpse of what it's like to fly a jet in a crew environment," Slusser says.  "It teaches you how to practically use CRM (crew resource management) with your partner in the seat next to you, the cabin crew, ATC (air traffic control) and everyone on the ground in order to reach your destination as safely and efficiently as possible."  In other words, learning that communication, leadership and decision-making skills (all being on the same page and not "going it alone") must come into play to make certain that human error does not result in devastating results.

One of the reasons he was able to meet graduation standards relatively quickly is because of the advanced-placement courses in physics, chemistry, calculus, world history and European history that he passed in high school.  That head start in his general-education requirements allowed him to focus on aviation-specific courses at WMU. 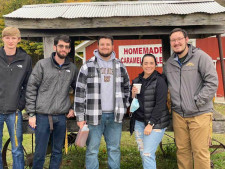 The genesis for his career choice might originate in the fact his grandfather taught South Vietnamese pilots how to fly combat helicopters in the war.  Also, Slusser grew up playing aviation-related video games.  In his junior year at Royal Oak High, he helped established a club that designed, crafted and tested remote-controlled airplanes -- often, he says, "with hilarious results."

Still not gung-ho on becoming a "real" pilot, Slusser says "it never really occurred to me to actually go for that until the time came to choose where I wanted to go to college."

Purdue and Notre Dame popped up on his radar screen, but they petered off into the distance when WMU came into view.

"Western was in that perfect spot for me," he says.  "It's just far enough where I could get the experience of going away for school, while still being close enough to easily go home if I needed to.  Plus, when I went on a tour of WMU, I fell in love with the campus in Kalamazoo and with the aviation facilities in Battle Creek.  That pretty much made my decision."

The Western community soon realized that it didn't have a shrinking violet when recruit Slusser showed up.  He was able to spread his wings and sample what a comprehensive university such as WMU can offer students.

It wasn't long before he helped reinvigorate WMU's ACE (A Club of Euchre) organization because "it's a fun game and great way to get to know people on campus."  When his freshman academic average topped 3.5, he was pledged into the national honor society of Alpha Lambda Delta.

"I joined GLICA because I love the conferences it puts on," he says.  "It's a great way to give high schoolers the chance to experience what I did, while teaching them world events from different global perspectives."

Thanks to Western and a class titled "The Genesis and Development of Rock Music," Slusser says he expanded his own perspectives.  "Anyone who knows me also knows that I was pretty much focused on the music from the 1970s to the early 1990s. But the class gives you more context behind how that music came to be.  Opening my eyes to artists I had not heard of before was really cool."  Hey Brendan -- welcome to the world of Bill Haley and the Comets, Fats Domino and Chuck Berry. 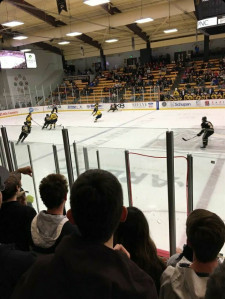 Enjoying one of the perks of attending WMU: Bronco Hockey!

More attuned to his future profession, Slusser jumped into the world of aviation.  From February of 2019 to January of 2021, he served as a College of Aviation dispatcher under the tutelage of Annie Quardokus, manager of aviation dispatching and scheduling.  That garnered "so many unforgettable experiences and opportunities to work with some amazing people," he says.  "It sharpened my ability to multi-task and work as a team in an often high-paced and high-stress environment.  In Annie, I had a fantastic boss, as well as fantastic co-workers.

"I can say with absolute certainty that I would not be where I am without my amazing mentors and instructors," Slusser says about Quardokus and instructors Joe White and Nathan Boyle.  "They not only delivered pertinent learning and training, but also career and life advice.  They spent extra time with me to prepare for the gauntlet that would eventually be CFI (certified flight instructor) training.  Because they were supportive through both the good times and the bad, I would not be nearly the person that I am today if not for them.  They are among the amazing people who make up my favorite part about WMU and the College of Aviation."

Part of the advice he probably received was to always keep his eyes on what's ahead, which is a major reason why he became connected to Delta Air Lines' Propel program and its direct line to a future as a pilot for that major carrier.  "That's my dream job," he says.  "Delta has been my favorite airline since I was a kid.  The chance to fly for Delta would be the experience of a lifetime."

And Slusser continues to add to his resume -- qualifying for his CFI license at The Flying School in Loveland, Colo., located in the northern part of that state at the base of the Rocky Mountains.  That could qualify him to achieve a shorter-term objective -- teaching future Bronco pilots about the joys of an aviation career.