Open-Minded Olivia Arnold - Stepping Out of Her Comfort Zone, Pursuing Her Passions and Taking to the Sky 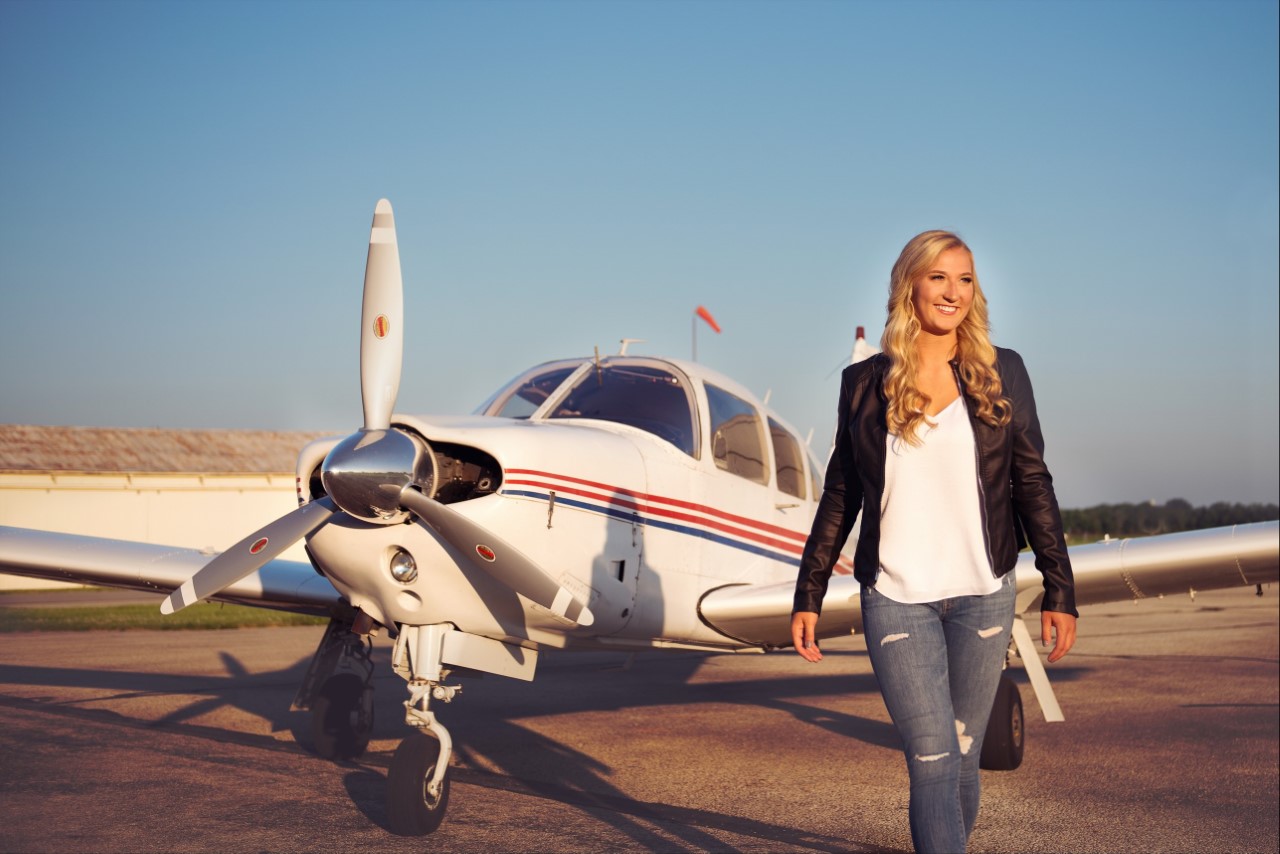 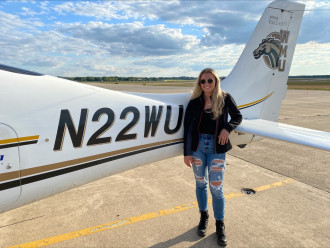 Many are the reasons for why prospective students choose the Western Michigan University College of Aviation, and then double-down reflecting on the wisdom of that decision.  Olivia Arnold, a sophomore who hails from the northwest Indiana, less-than-2,000-person hamlet of Wheatfield, possesses many of those reasons, plus this unique reaffirmation:  her affinity for the wild blue yonder has been accentuated by greens -- golfing greens to be exact.  Why is this so for the double major in aviation flight science and aviation management and operations?  Read on:  "While Western has given me great experiences and connections," says the 2020 graduate of Kankakee Valley High School, "one of my favorite things so far has been the college's golf outing.  Before then, I had never golfed in my life.  It all started with a student-wide e-mail to fill out a survey if interested in taking part.  There were limited spots, but I thought I'd just fill it out, not really thinking anything of it."  Arnold was scripted to have this kind of perspective on participation.  In high school, she took advantage of many opportunities and liked being part of groups.  So why should her college life be any different?  Almost forgetting about the survey, she was somewhat surprised a few weeks later to see her name on a list of students who were to take part in the outing -- this being the aviation college's 10th annual fundraiser. 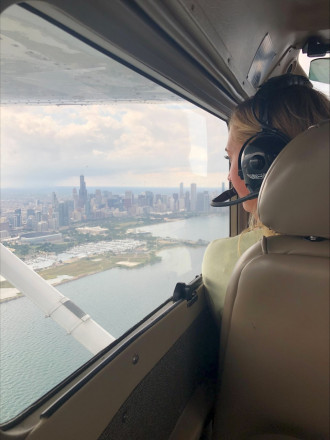 Arnold flying over the Chicago shoreline

She did have a job, but coincidentally she was scheduled to be off that Monday.  However, she was booked to work early the next morning.  "I decided the opportunity was too great to pass up," she says, "because it was going to be the first in-person College of Aviation event for me."  And it wasn't going to be a "gimme" putt for her to take part -- Arnold had to get up at 4:30 that morning in her hometown in Indiana to be on time for registration at 7:30.  "I was nervous the entire drive to Kalamazoo about making a fool of myself golfing," she says about being part of Endeavor Air's foursome.  "I had a really great time.  It turned out that no one really cares about how good at golf you are.  We all had one thing in common.  We like to fly airplanes. Instead of talking about the length of a drive or the quality of a chip shot, we bonded over flying.  I can't tell you what made me have the guts to actually sign up, but I am so glad I did because it's a very unique networking experience that you can't find anywhere else."  Hoosier basketball and daily commodity prices for agriculture's products are much more popular subjects than aviation where Arnold was raised.  "Aviation wasn't very popular in my hometown," she says.  Her interest was sparked by a grandfather who had his private-pilot's license and by her attendance at air shows, including the annual trek to the EAA AirVenture in Oshkosh, Wis., where there was always something exciting to see.  The 2021 version, for example, featured 3,000 aircraft on display and a turnout exceeding 600,000 viewers.  "It was the 2019 airshow that was the main deciding factor of me wanting to fly airplanes," Arnold said.  "I started flying a month later and completed my private-pilot training at the end of my senior year in high school."  So what was next for Olivia Arnold?  "I had a family friend who attended WMU and he had nothing but great things to say about Western," she says.  "I was also drawn to the college's Cirrus fleet.  You don't find that at many other flight schools," some of which she visited before making her choice.  Other factors were the proximity to her home (less than three hours away) and that the college "felt like home."  The fact that Arnold had advanced-placement and honors classes on her academic resume made her a welcome addition to the Western family. 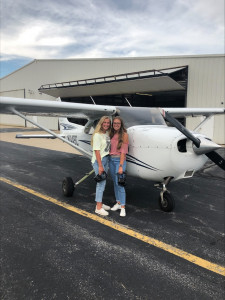 Arnold and friend in front of a Cessna

As mentioned above, Arnold has never let too much grass -- especially the manicured species on a golf course -- grow under her feet.  Still a little more than a rookie when it comes to the College of Aviation, she belongs to WMU's chapters of Alpha Eta Rho (the organization that links the aviation industry to the world of higher education) and Women in Aviation International (whose mission is to greatly increase the current 6-percent female population in the industry).  She serves on the Aviation Student Council, enjoys the thrill of racing downhill on a pair of waxed boards as a member of the WMU Ski Club, and pledged the international sorority of Alpha Phi on the Western campus.  All of this, Arnold says, "is a great way for me to make connections with new people, start networking, and be in the know.  When you are a part of fun groups and RSOs (registered student organizations), you get to experience great opportunities and make quality friendships."  There's even more networking because of her employment at the WACO Kitchen, a restaurant on the second floor of the aircraft corporation's operation at the Battle Creek Executive Airport where the WMU College of Aviation is based.  "Many of the customers are fly-in pilots," she says, "and the interaction is so much fun.  I have heard so many great stories and received great advice regarding my education and future career.  It's a great environment in which to learn. What great conversations!" 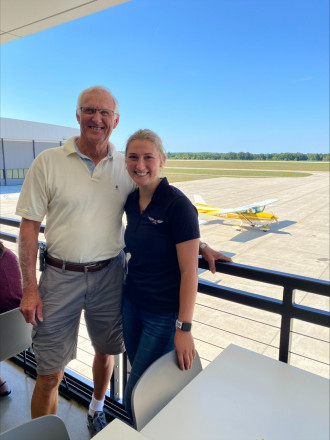 Added to that is her educational environment.  "My favorite part of WMU," she says, "is being surrounded by people who love the same things I do.  I love that within the College of Aviation, you are treated like a professional and educated like one.  I have already seen myself grow in so many aspects as an individual, as a student, and -- more importantly -- as a pilot."  When she's not studying, piloting a Cirrus, or serving sumptuous entrees at the WACO Kitchen, Arnold likes to surf "The Big Lake," visit her family in Indiana, and "fly with my grandpa."  On her horizon, she believes, is "international travel" as an airline pilot.  "I am very open to what that base of operation might be so I will see where the aviation industry takes me.  I am also planning on obtaining my seaplane rating and incorporate some hobby flying of that kind."  Still many aviation courses and air hours away from the place where she can see a path to her ultimate objective, Arnold is not afraid to offer a bit of advice to her peers and those who will be following in her footsteps:  "Put yourself out there.  Get out of your comfort zone (such as stepping up to the first-hole tee for the first time).  Take some chances.  Make the most out of what is given to you and the rest follows.  If much of what I've already experienced happened amidst a pandemic, then I am very excited to see what this upcoming year has in store for me at Western."  Now that's a glass-is-half-filled attitude.