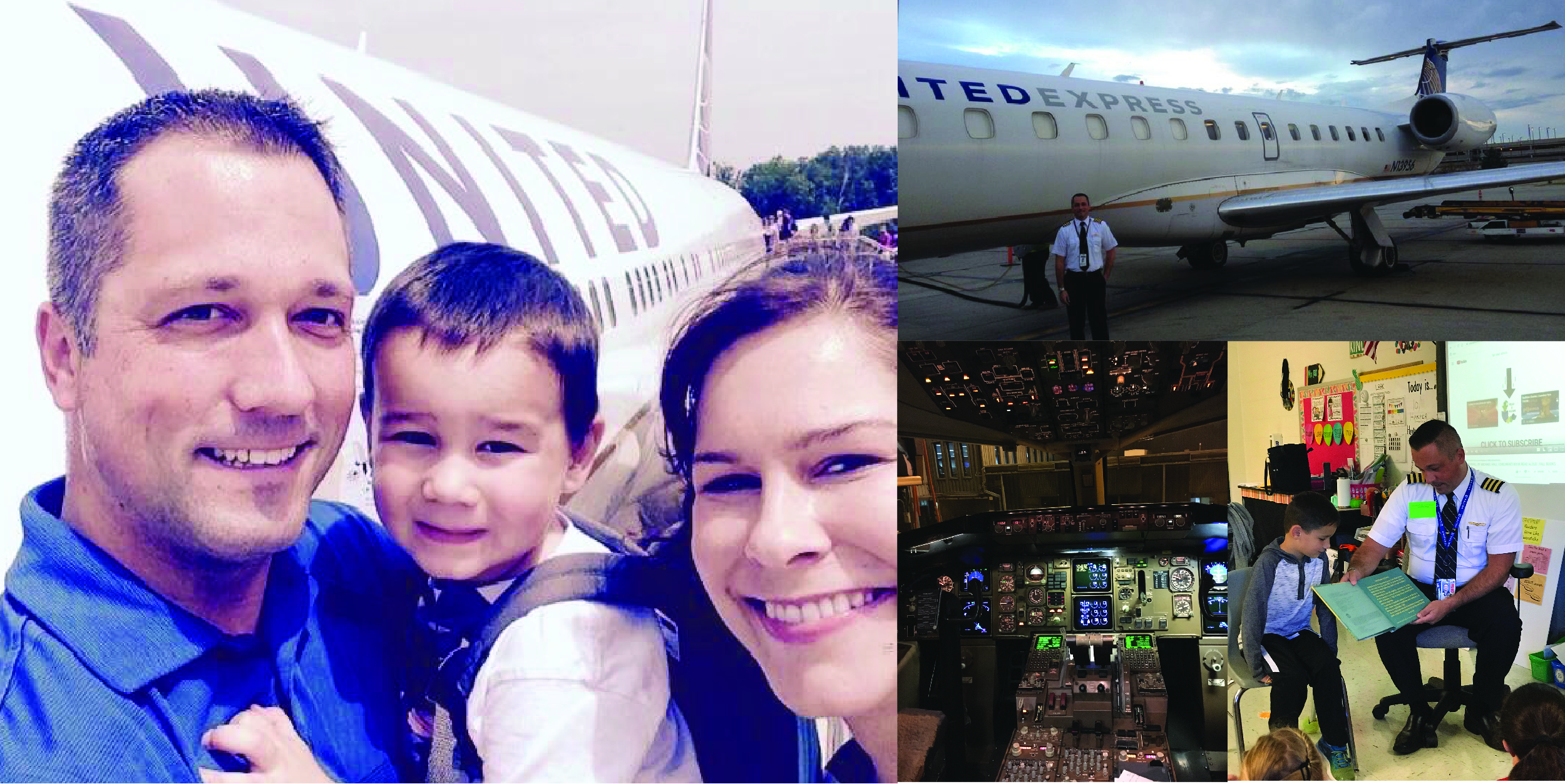 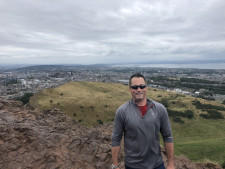 Every time Justin Mertel, a 2004 Western Michigan University College of Aviation alumnus lands his Boeing 757 at the Dublin airport in Ireland, he is reminded of why it is his favorite destination as a United Airlines pilot.

The Emerald Isle is a long way from Mertel's days as a seventh-grader when he accompanied his father on a trip to South Carolina.

"I had always talked about flying while growing up," he says.  "The company my Dad worked for had a Citation and I went on a job-shadow trip with the pilots to Charleston.  After that, there was no going back." 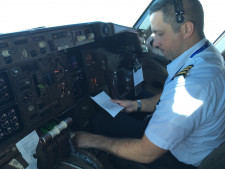 With such a good idea for a career choice in his head, Mertel chose WMU for higher education for good reason.  "Western has a great aviation program that also offers a total college experience.  And it was close to home."

Home then was Rockford, Mich., just north of Grand Rapids in the central part of the state's Lower Peninsula, and not too far from Western's Kalamazoo campus and the college's aviation headquarters in nearby Battle Creek.

On the way to his degree in aviation flight science and aviation management with a minor in business, Mertel first served as a dispatcher at the college's airfield.  Then, like the majority of his WMU student colleagues, he spent semesters as a flight instructor.  Mertel says that job not only added to his air hours, but also taught him a great deal about effective time management.

Even before his graduation in December 2004, Mertel had been hired by IFL Group, an air-cargo enterprise based at the Oakland County International Airport near Pontiac in his home state. IFL does business throughout North America, Central America, the Caribbean and South America.

"This was a great place to start outside of Western," he says about where he was employed for two years until 2007.  "It was very demanding flying and taught me a lot about the aviation industry, things you can only learn in real life."  He learned a lot about "dealing with uncontrolled airports, flying at night in Mexico, filling out my own flight plans, and international documents."  On top of all that, he says, there was "the learning curve of flying old airplanes that demanded you know the systems." 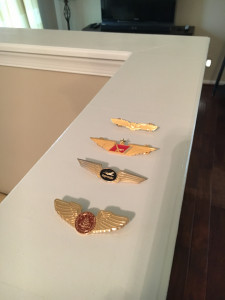 These experiences qualified him for ExpressJet Airlines, a sojourn that lasted seven years until 2014.  ExpressJet flies Brazilian-made Embraers under the United Express brand for United Airlines.  It is headquartered in College Park. Ga., with hubs in Chicago, Cleveland, Houston, Newark (N.J,). and Richmond, Va.

"I definitely learned the ups and downs of a career in aviation," he says, "as the industry worked through the financial crisis of 2007/2008."  Learning how to be a strong asset of a flight crew came with the job as he was being upgraded to the rank of captain.  "I found how to better handle difficult situations and be a calm leader at the same time."

Now it was time for his "dream job," as Mertel calls it.  Since joining United Airlines in October 2014, Mertel has been primarily piloting Boeing 757s and 767s out of Washington's Dulles Airport headed for global destinations with an occasional flight to North American airports.   "Seeing new places and connecting with the rest of the world and those who live there is the best part of the job,” he says. 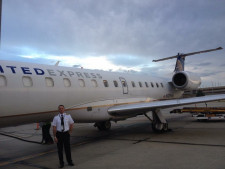 His dream may have been conceived in Rockford as a boy, but the dream became a reality at Western, thanks to the mentors with whom he exchanged career path options and advice.  He has warm recollections for Josh Feldkamp, an instructor for much of his training at WMU.  "He did a great job and I still talk to him today," Mertel says.

In addition to Feldkamp, Mertel received regular guidance from College of Aviation Dean Dave Powell and his predecessor, Rick Maloney.  Both could offer practical advice.  For example, Powell logged a decade or two at United's headquarters at Chicago's O'Hare and in Miami as a chief pilot, a task that included hiring folks for cockpit duties.  On top of that, as an Air Force pilot, he twice attained ‘Top Gun’ status.  "Both those guys were great at mentoring students in an approachable and open way.  I still talk to Dave on almost a weekly basis to see how things are going,” says Mertel. 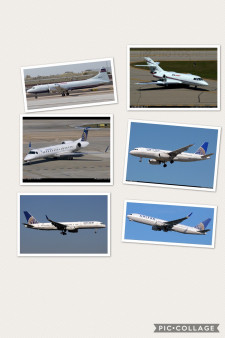 The current dean helped in another way.  "Dave and Anthony Cozzi, a longtime friend from WMU, both wrote me letters of recommendation for United.  In addition, with a connection and introduction, I was able to meet with United's director of operations to learn more about the company and the interview process."

Alpha Eta Rho, the co-ed, international fraternity for aviation students that serves as a liaison between educational institutions and the industry, was a good extracurricular activity for Mertel’s career. Formed in 1929, it has 90-plus chapters around the world and the Western unit is one of the largest.  "This was by far the best thing I did for my aviation career," he says.  "I worked hard and have earned every single job in my career, but the friends I made at Alpha Eta Rho helped to open doors and make network connections."

Outside of the textbooks, lectures and flight training, he was also involved in and eventually elected president of the College of Aviation student council.  The "total college experience" he wanted while on a career path included Bronco football games, attending the "granddaddy of all air shows" in Oshkosh, Wis., living in the "aviation dorm" his freshman year, and "flying with friends to get lunch." 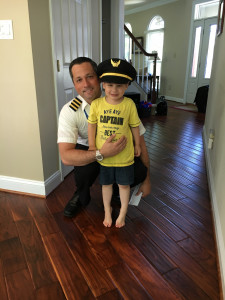 The latter is what -- in aviation parlance -- is called a "$100 Hamburger Flight" where $95 in aviation fuel is spent to buy a $5 hamburger somewhere out there in the wild blue yonder.  Or to make an impression.  And it worked for Mertel.  "I flew a Cessna from WMU with my girlfriend at the time to meet her parents for the first time."  They turned out to be his future in-laws.

Flying professionally for 16 years, Mertel admits his career brings some negatives.  "Aviation is definitely an up-and-down career," he says.  "I got hit hard by the 2007/2008 financial environment.  I was on reduced pay and stuck as a first officer for a long time while at ExpressJet.  It was also hard to be away from family and friends on holidays and weekends," a situation that was accentuated after he married "girlfriend" Shanna 11 years ago.  They have an eight-year-old son, Landon.

Despite that, Mertel is still a zealous advocate for what he does for a living.  "Aviation is a relatively small community," he says.  "I have realized it is important to help those you can when you can, and they will do the same for you when you may be down." 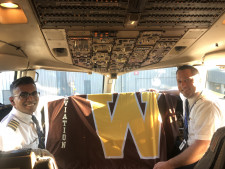 He's evolved into a valuable resource for those who want to follow in his footsteps because Mertel epitomizes a specific employment path -- starting in entry level cargo flying, being elevated to a regional air carrier, and finally hitting the "Major Leagues" in the airline industry.

Earlier this year, the College of Aviation entered into a partnership with United Airlines' Aviate program, it’s a career-development initiative that is the most direct route to employment as a pilot with the airline. 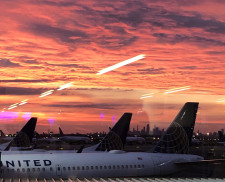 "I am proud to give back to aviation and WMU as one of the coaches and ambassadors to WMU for the Aviate program," he says.  "I will be paired with five to 10 students as their mentor and coach them through the process of getting hired at United."  If there is anyone who can give personal testimony about this kind of path, it's Mertel.

"WMU was one of the best decisions I ever made," he says.  "The friends and connections made there have helped me throughout my career, and I am sure it will continue to do so."