From VP to FO – Logan Brown’s Involvement, Engagement and Internships Lead to Success 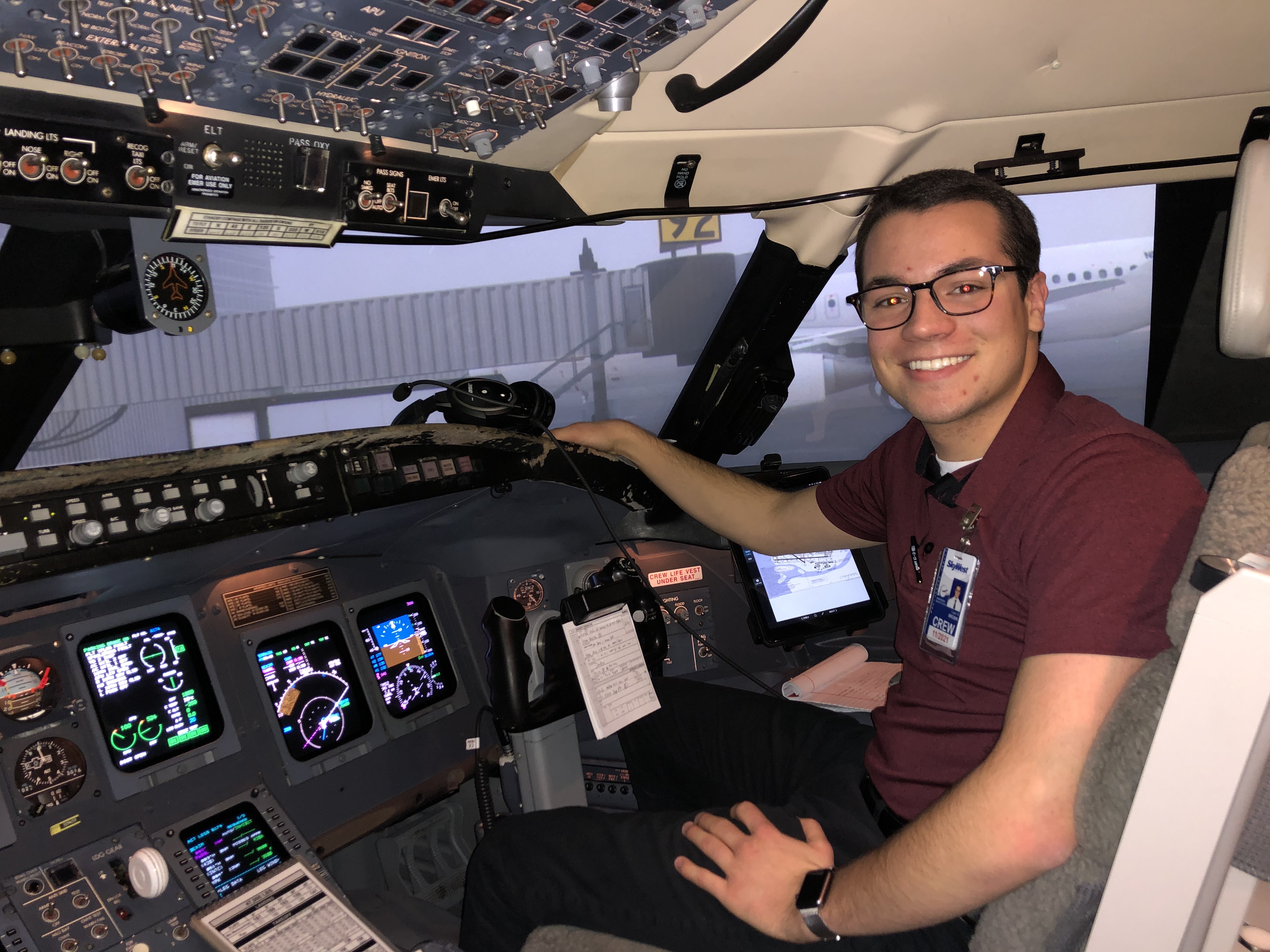 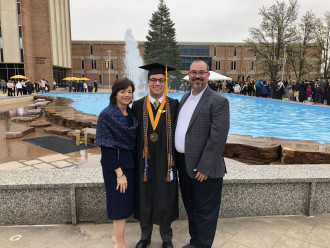 Brown and his parents at his 2019 Graduation

Pro quarterbacks like Tom Brady and Drew Brees get all the glory, but success depends on their offensive line, receivers, coaches, trainers -- right on down to the water boy.

WMU graduate Logan Brown got that message and how it related to the pedestal that airline pilots might believe they are on during his first real "job" in the aviation industry -- serving as a flight operations intern with United Airlines at Dulles International Airport near Washington, D.C. in the summer of 2017, about two years after enrolling in the College of Aviation.

Request Information about the College of Aviation

On Brown's first day in the chief pilot's office, his immediate supervisor -- a first officer assigned to fly 777s -- gave him a tour and said this: "We pilots love what we do and we're lucky to be able to fly for our work.  If you get nothing else out of this internship, I want you to look around to see and understand the army of people it takes to allow us to keep these planes in the air."  That army included dispatchers, mechanics, flight attendants, rampers, controllers -- you name it. 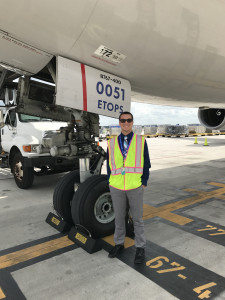 Brown during his United Airlines internship

Armed with that perspective, Brown, who hails from Rochester, Mich., where he graduated from Notre Dame Prep in 2015, returned to campus with a more comprehensive picture of what a career in aviation actually meant -- particularly when it came to giving back.  Or, in other words, paying it forward.

For more than 18 months, he served as a certified flight instructor for the college.  "That was an incredible experience," he says, "getting to teach fellow classmates and seeing them succeed.  It was very gratifying.  It felt thankless at times, but it was worthwhile to see a student grasp a concept and know that I had made a slight difference in that person's life.  I was trying to give back to a program that had given me so much."

College of Aviation enrollees are already high-altitude students on Western's campus.  Brown took that to the stratosphere in rounding out his education.  He entered as a Medallion Scholar in 2015 and eventually served as a member of the Western Student Association.  More about this later.

Choosing Western's aviation school amounted to something of a homecoming for Brown, whose father grew up in Plainwell 20 miles north of Kalamazoo.  "I visited my grandparents and cousins in Kalamazoo quite often, so it felt like my second home.  I had checked out other universities, but a tour of the campus in September 2013 sealed the deal.  Kalamazoo and Western was the place for me."

There was no family legacy channeling Brown's career choice.  Family trips from Michigan to places such as the Grand Canyon introduced him to flying.  A clue was that he was as fascinated with the planes as he was with that seventh wonder of the world.  If Brown needed an additional stimulus about aviation as a way of life, the internship in the nation's capital put him over the top.  He's not the only person who has converted a childhood hobby into an enjoyable vocation.

Shortly after his graduation in April 2019 with degrees in both aviation flight science and aviation management (with a minor in economics), Brown taxied into the real world and is now a first officer for SkyWest Airlines flying out of Detroit.  SkyWest was founded in 1972 and still calls St. George, Utah, its home headquarters.  Once promoting itself by offering penny-a-pound airplane rides, SkyWest now employs 16,000 folks who are responsible for 2,400 daily flights to 287 destinations across North America with a fleet of 495 aircraft. 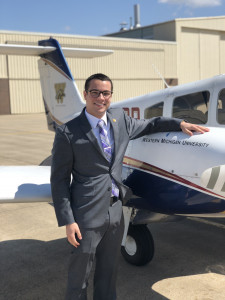 Brown standing in from of a WMU Piper Seminole

Like many College of Aviation alumni, he thinks the best thing about his job is simply going to work.  Yet getting there is not all that easy.  "Becoming an airline pilot is a lot of hard work as countless other alumni can attest," Brown says.  "It starts long before your first day of airline training.  It starts with the day-to-day effort required to be successful in a program like Western's.  After that, it took months of ground training and time spent in simulators" to make progress.

His new job "manifested itself as time away from family and friends," he says. "Training involved two months in Salt Lake City with only one short break to go home.  Now I am living the typical airline schedule of more nights each month spent in a hotel than in my own bed.  It takes getting used to, but it comes with the territory."

All worth it though in Brown's eyes.  "Regardless," he says, "being able to put on a uniform that I dreamed of wearing as a child is very gratifying.  So, my advice to those who wish to follow in my footsteps -- push through and persevere."

The college's aviation curriculums are tough enough for the normal student.  Brown chose a path often not taken, which is why he said time management was the biggest challenge he faced at Western.  As a Medallion Scholar, he volunteered to be part of the annual competitions.  "I could mingle with prospective students and their parents, answering questions and offering them suggestions.  I loved talking to students who were on the cusp of making one of the most important decisions of their lives."

On top of that, he rounded out his education as a member of the Western Student Association, an experience he called critical to his professional development.  Brown chaired the WSA's campus sustainability committee and also served a term as vice president of the student government.  "I learned so much about WMU and the problems students face," he says.  "I networked with administrators, the board of trustees, and even the WMU president.  To me, it made WMU feel a lot smaller and more like a family.  I highly recommend that students get involved in their student government." 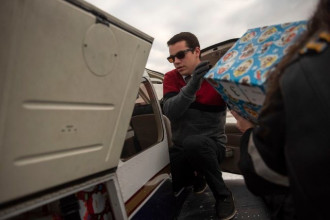 In other words, don't just gripe. Do something.  "Our slogan is 'be the change' because we understand that this university -- great as it is -- is not perfect," Brown says.  "What better way to address problems than to get involved and fix them.  Administrators are open to meeting with student reps.  My time with the WSA was critical to my time at Western."

In the "all work and no play makes Logan a dull boy" category in Brown's college career, there was "Operation Good Cheer," an annual event at the Oakland County International Airport.  He represented WMU among the people from all over Michigan who fly in, load their planes with presents, and haul them to designated communities to be distributed to children in foster homes.  Brown, an avowed Christmas celebrate, didn't need Rudolph to deliver his bags of goodies to kids in Grand Rapids.

And then, of course, is the unprecedented Bronco football season of 2016 when P.J. Fleck took his undefeated team to the Cotton Bowl.  Brown says having a Division 1 football program had a bit of a role in his choice of a college, but in his wildest dream, he never expected 13-zip. Crazy?  A bit.  He remembers sleeping outside in a snowstorm in order to be in the front of the line when ESPN's College GameDay show came to town as Western prepared to play Buffalo.

"It was awesome to see national media coverage come to Kalamazoo," he says.  His dad is a Central Michigan University graduate "so I couldn't miss an opportunity to use my sign to roast him on national TV."  Brown's allegiance didn't end there.  As a College of Aviation volunteer, he found himself in San Antonio, close enough to make it to Dallas and watch the Broncos get edged by Wisconsin that New Year's Day.

Those are all warm memories for the SkyWest first officer, as are his associations with College of Aviation personnel -- chief instructor Rob Bunday, lead flight instructors Ryan Seiler and Jim Whittles, associate professor Lisa Whittaker, and Annie Quardokus, manager of aviation dispatch and scheduling.  Each gave of his/her knowledge to help Brown succeed. 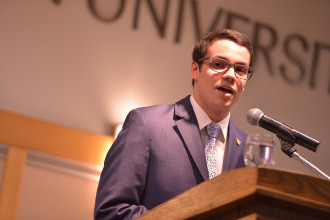 Then there was Russ Kavalhuna, the instructor in his favorite class -- aviation law.  At one time, Brown believed that if aviation wasn't in his future, being an attorney was because of his interest in government and politics.  Kavalhuna had a leg in those worlds.  He was an airline pilot who went to law school on weekends on the way to become a federal prosecutor.  Kavalhuna's always-an-open-door-attitude for mentoring also made a major impression on Brown in how he gives back.

"To me," he says, "first-hand testimony is often a make-or-break form of information as people consider the WMU program.  I have always tried to make myself as accessible as possible to people making a college decision.  WMU and the flight program are not perfect.  Nobody is.  However, I left knowing that I was incredibly well-prepared for the future, and knowing that this program has done right by me.  That's the message I give."

All this started during his interactions with the students who came under his wing as a certified flight instructor.  That role has been continuous as many of those contacts are alive and well.  He's still only a phone call away.

"We all have different personalities," he says.  "Sometimes as a student, I learned a lot by flying with a different instructor, which is why I told them that I was always available to call or text.  Whatever it took to help them succeed.  It was a lot of work when students took me up on that, but it was one of the most gratifying parts of my time at Western."