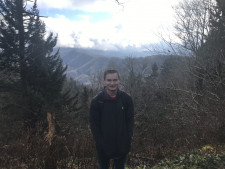 Aviation flight student, Vladislav Robinson, engaging in a passion outside of flying: hiking

Vladislav Robinson wasn't born to fly, but it wasn't a heck of a long time after his birth that he did a lot of flying.  At the age of 17 months, "Vlad" made his first flight, departing his birth country of Ukraine.  His maiden aviation journey required four flights for the future Bronco to reach his adoptive parents in Port Orange, Fla, the placed he called home until 5th grade when he moved to Steeler Country: Pittsburgh Pa.  While this initial flight may have introduced him to higher atmospheric elevations, his true affinity for aviation was nurtured as he grew because his father was a pilot in the U. S. Air Force.

Request College of Aviation InformationThere was more pointing him toward the sky as a career.  "I think the freedom of movement is really what piqued my interest in flying," says the senior who carries a dual major in aviation flight science and aviation management and operations.  "It is great that aviation allows you to travel almost anywhere in the world.  I can't wait to see cities and places I might not have ever thought of visiting" -- maybe even his birth country.

But what sealed the deal for Vlad to choose Western Michigan University for higher education was the College of Aviation's summer camp in 2016.  That's how he got a first-hand look at what the college had to offer.  He was so impressed that he repeated the experience the following summer. 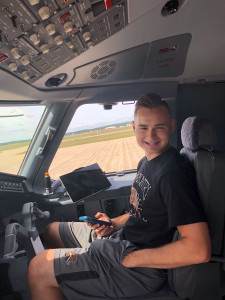 Before that, aviation was in a team photo with architecture and archaeology as potential career paths.  "The summer camp was an integral part of why I chose Western," he says.  "That first summer camp really gave me a great introduction to the aviation world and allowed me to determine that this is what I really wanted to do."  Now a WMU senior, Vlad was being wooed by others -- he toured the campus of the University of North Dakota and was dined in his home city by Embry-Riddle Aeronautical University.  But no dice.  "The location of Western is great.  WMU is far enough away where I can feel on my own, but not far enough away to where it takes more than a full day of driving to get home."  There was another factor in Vlad's decision.  "I wanted to attend a school that still felt like college," he says.  "I really enjoy aviation, but I have other interests.  It's nice to have friends in other fields of study.  Being able to talk about other majors is a nice break from time to time."  It didn't hurt either that Vlad competed in Western's prestigious Medallion program, one of the largest merit-based scholarship initiatives in the nation and earned $64,000 in financial help across four years.  That will take a big chomp out of any student debt he takes with him post-college.  But the elephant in the decision room, he says, was the College of Aviation itself and the people with whom he has come in contact.  "The aircraft are amazing.  The parachute in the Cirrus is always a reassuring backup.  The instructors are some of the best out there.  They know what they are teaching because they've done it all before.  I definitely believe Western's program is the best in the country, maybe in the world."  Symbolic of that is his choice for a favorite class -- the one about advanced aerodynamics taught by faculty specialist Mervyn Elliott. "I really enjoyed his teaching style," says Vlad who admitted that he's scored better in other courses.  "The material isn't easy, but I learned in depth about exactly how an airplane flies."  Another plus is that he's not the only "Vlad" at the College of Aviation -- professor Vladimir Risukhin  is on the faculty. 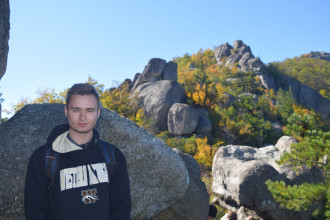 Proving that it's never too late to learn a new trick or expand one's perspectives, Vlad waited more than a few semesters to jump into extracurricular activities and round out his college experience.  He is now a member of WMU's chapter of Women in Aviation International (WAI) and serves as the organization's representative to the Western Student Association.  "It has gotten me more involved within WAI as well as giving me a chance to see what's happening within the university, how all that affects students, and how we, as students, can be heard better.  I should have done it earlier, but nevertheless I am glad I did it now."  When Vlad is not engaged in intramural sports such as flag football (he's a Pittsburgh Steelers fan), soccer or basketball (his "Utter Trash" squad lost all of its games), he's serves as a volunteer at the Indiana Dunes National Park, which became the nation's 61st in February of 2019.  The park hugs 15 miles of Lake Michigan's southern shoreline in northwest Indiana.  "I love nature," he says, "and they need all the help they can get.  Schedule willing, I drive to the park to help at least twice a month."  Escaping the pressure of college has taken Vlad to Alaska, hiking the trials of Kenai Fjords National Park near Seward and Denali (formerly Mount McKinley) National Park.  The result is great exercise and "pretty cool experiences."  Sports, running, lifting weights and listening to music are all stress relievers that help tire him out before it's time to hit the sack. 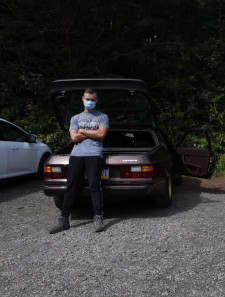 He's also a bit of a road warrior when not in the air.  Something of a car guy, he bought a 1985 Porsche 944 in 2017 primarily to drive, but he's not afraid to get under the hood either.  "I work on it sometimes," he says.  "It's nice to be able to fix something yourself and that saves a ton of money."  The real joy, however, is driving it.  If there is any more free time for Vlad, it's spent with his DSLR (digital single lens reflex) camera, which is kind of a hybrid of film and computer technology.  "It's fun to have so much control over how an image turns out," he says.  "My favorites are long-exposure shots of the night sky, like the Milky Way and the comet Neowise."  In addition to one's passion, being a pilot requires degrees of situational awareness, mental dexterity and arrays of knowledge.  All of which have to be proven to the umpires and judges who oversee the profession -- the academics, the Federal Aviation Administration (FAA), the aviation industry itself, and all kinds of folks at various levels.  Vlad has had an additional hurdle -- a medical condition which requires additional scrutiny by the FAA.  "I never knew if I would be allowed to fly a plane commercially beginning in the fall semester of my junior year in high school," he says about the effort to gain medical clearance that extended through his senior year.  "I knew there would be some hiccups along the way, but I wasn't prepared for just how many there would be."  Subjected to multiple tests at multiple locations throughout the Midwest, if he didn't pass at one particular stage, he'd have to start the entire process over again.  Months after taking one, he was told by the FAA that "that test needed a drug test tied to it.  It's been a long process, to say the least," Vlad says.  "I completely get it though and I don't take offense.  It's how the world has painted my situation.  I don't think it defines who I am, but the FAA sure thinks it does."

As comfortable behind the lens as he is in the flight deck, Robinson demonstrating his camera abilities

Talk about the right attitude.  Listen to Vlad:  "I knew even if it was denied, I'd be fine either way.  I had other options open.  The world is too vast and interesting to be worried that I would never find something else.  Flying was what I wanted to do, and still is.  When I finally learned I was accepted, I cried.  I'm not afraid to admit that.  It was one of the best feelings in the world.  I was being allowed to pursue my dreams, and I want to be the best pilot I can be."  As a "best pilot," he'd like to fly for Delta Air Lines, including its international routes.  That level of career would allow Vlad to achieve a few other dreams -- own a cabin in the mountains, hike every U.S. national park, own some "fun cars" and drive one across the United States, and witness the Aurora Borealis.  "I just need to see where life takes me or where I try to lead it," he says.  "I am sure my goals will change, but I have a framework of where I'd like to be in 10 years.  Either way, I am excited for the future."  It's a future being mapped by the WMU College of Aviation.