Diving In with Brooke Semler: An Aviation Bronco Birthright 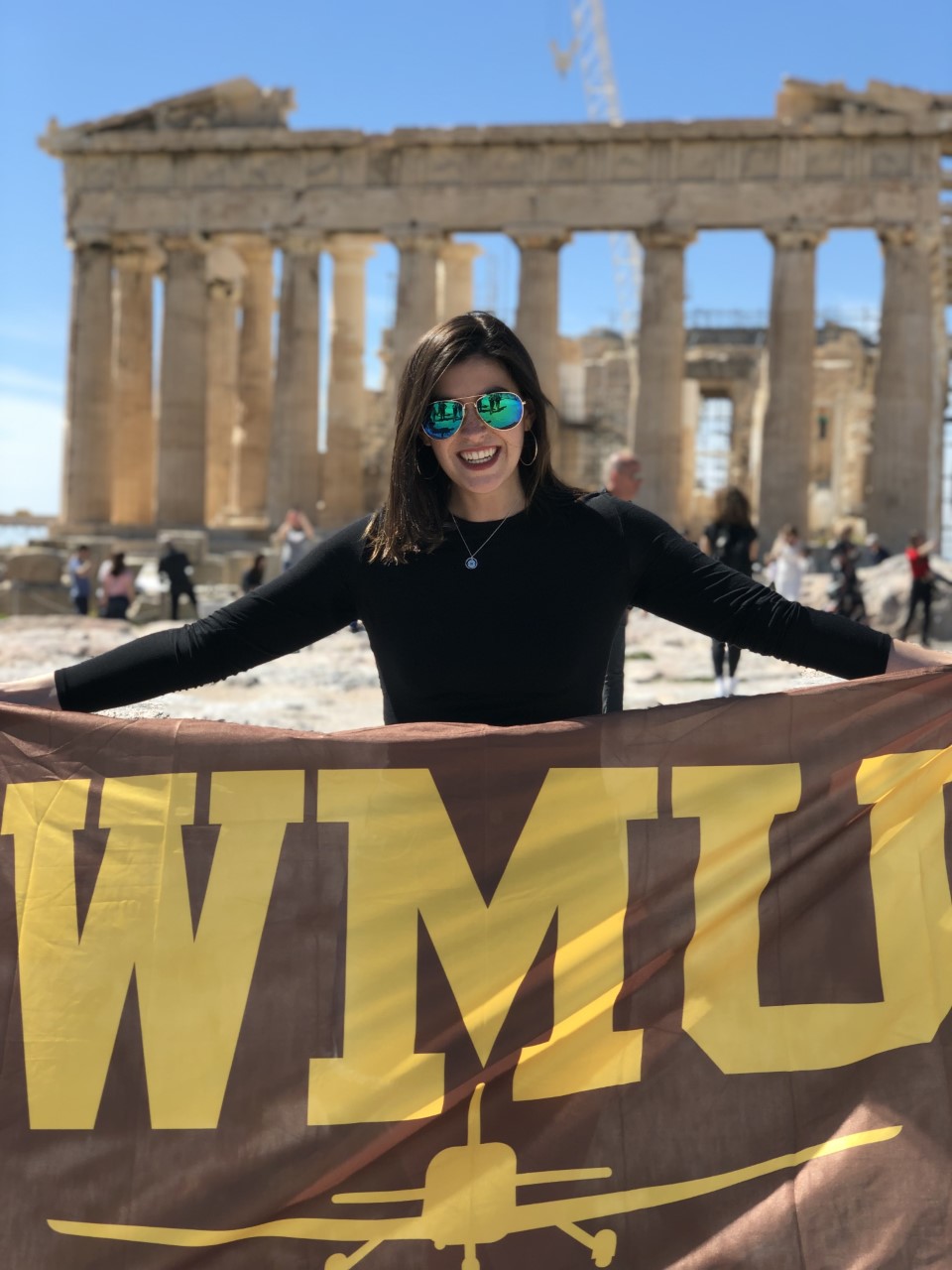 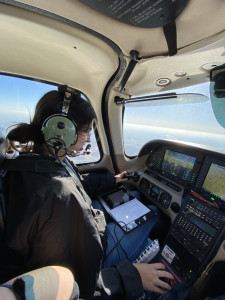 Fraternities and sororities often feature "legacy" pledges -- meaning if Dad was a Sigma Sigma or Mom was a Nu Nu, so is an offspring almost automatically.  While it was never "automatic," Brooke Semler puts the concept of legacy membership to shame.  The College of Aviation junior is a fourth-generation Western Michigan University Bronco.  Her parents hang Western diplomas on their wall.  So do a set of grandparents.  And even "Great Grandma."  She was also a bit scripted to choose aviation as a career path because her mother is a flight attendant for United Airlines and her grandfather retired as a lieutenant colonel in the Air Force.

Request WMU College of Aviation InformationGrowing up in the village of Spring Grove, located near the Wisconsin border about a 90-minute drive northwest of downtown Chicago, Semler says she's been "around aviation her whole life.  My family would take weekend trips whenever possible and I couldn't get enough of traveling.  I knew that I never wanted to give up the flight benefits (a perk from her mother's profession) and I wanted a career that was flexible."  In other words, not "working 9 to 5" -- thanks, Dolly Parton. 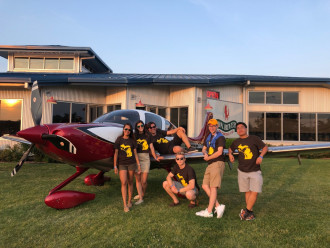 If Semler needed a booster shot, it came via the Oshkosh, Wis.-based Experimental Aircraft Association (EAA) and its Young Eagles Program, which offers free first flights for youth 8 to 17 years old.  "I attended a Young Eagles event as a high-schooler at the local airport and fell in love with flying," she says.  "I knew that was what I wanted to do in life and my parents signed me up for flight lessons."  While the WMU College of Aviation already had several aces in the hole when it came to attracting Semler, she never knew that her own travel "perk" wasn't too far away.  Like spring break in her freshman year -- a trip to Great Britain and Greece.  Not yet a sophomore, she sampled how her chosen profession worked in other countries.  "We toured the control tower in Athens and many other must-see sights."  One of those "must-sees" was the aviation wing of the Imperial War Museum in Duxford, England.  With its 200 vintage aircraft, it is the largest of its kind in the United Kingdom. 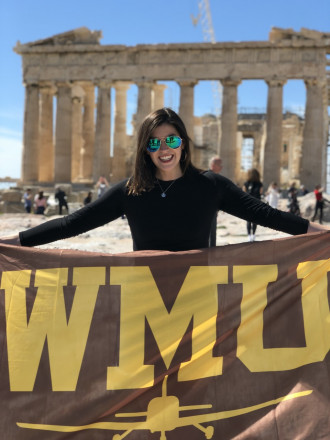 Semler in Athens during her Study Abroad Spring Break Trip

Semler wanted a study-abroad venture in college, but never dreamed it would be available so quickly.  "A week-long trip wasn't exactly what I was expecting when I told my parents I wanted to study abroad," says the junior majoring in aviation flight science, "but I wouldn't trade that experience for anything."  Her "legacy" status never really came into play for Semler.  "I remember touring the WMU campus and feeling so at home," she says.  "People were so friendly and said 'Hi' to us.  At the (Kellogg Field) airport, it seemed like everyone knew each other."  WMU's membership in the NCAA's Division 1 didn't hurt either.  When Semler was looking at college destinations, the Broncos were in the middle of an undefeated football season and a future berth in the Cotton Bowl game against Wisconsin.  Her alumnus father regaled her with stories about attending Bronco hockey games against Division I foes.  How about one more factor.  She competed for -- and won -- a prestigious Medallion Scholarship, one of the largest merit-based initiatives of its kind in the nation that provides $64,000 over four years.  "I was one of 20 incoming freshman awarded the Medallion," she says.  "Aviation is definitely not a cheap endeavor so being able to combat some of the costs meant a lot to my family and me."  Since joining the Western family, Semler has not been a shrinking violet when it comes to activities and networking.  She joined the WMU chapter of Women in Aviation International (WAI) as a freshman and now is in her second year as the unit's president.  Much of her pre-college mentoring came from Mom's awareness of the aviation industry and how to get knee-deep in its workings.  There were many conversations about the value of WAI membership.  "I remember taking part in the 'Fall Welcome' event for freshmen at the airport and heading straight for the WAI booth to sign up," she says.  "All of the pilots I spoke to were right.  WAI has been such a huge part of my college career."  Now comes the "Pay It Forward" part.  Semler is in her second year as one of the college's aviation ambassadors and leads tours for prospective students and their families.  "I am a big extrovert and love to tell them why I chose WMU," she says.  She'd like to retain carrying that WMU torch at a future internship with United or Delta once Covid ebbs into the planet's history.  When that happens, Semler will take with her the hundreds of nuggets of wisdom that are coming her way, thanks to the college's curriculum and instructions.  Many of those originated from associate professor Lisa Whittaker's course in aviation safety.    "The class met once a week for two hours," Semler says.  "That was difficult for me because I struggle to sit still for that long.  However, the content was super interesting.  It focused on aviation accidents and incidents, how they could have been prevented, and how aviation has changed as a result.  It wasn't the happiest of topics, but I am a better pilot as a result."  Because of "happier" topics and events, Semler is seeing herself evolving into a better, well-rounded professional, loving "every minute of my experiences at Western," such as: 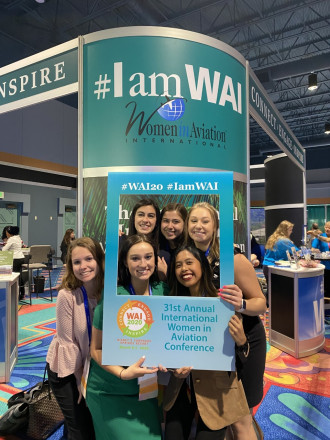 Semler and friends at the annual Women In Aviation national conference

* Living in the "aviation learning community" in Henry Hall as a freshman where she forged "lifetime friendships."  * Her WAI connection that organized a four-hour "bonding and fun-filled" drive to Republic Airways' headquarters in Indianapolis and a weekend flight/tour of Envoy Air's base of operations in Dallas, both of which fill her scrapbook of memories.  * Working the college's summer camps for high-schoolers, and witnessing how those sessions successfully recruit enrollees "because of all the fun they had."  * Representing the College of Aviation at the annual EAA AirVenture in Oshkosh, where she attended the world's greatest airshow and shared "my love" for the university's program that took her there.  Still not defined are her post-graduate plans, but she is setting her sights on flying for an airline.  Obviously, if Mom and "legacy" are in play, it would entail wearing a United uniform.  Because of her spring-break adventure, she'd liked to someday have an international connection.  Although the "finer details are lacking," she says, "I am super excited about my future in this career and I can't wait to see where I end up."  That future will also include another passion. "I am big into scuba diving," she says, ever since taking a course in marine biology in high school where she learned to identify all the interesting creatures that came into the view of her mask.  With her father and a sister also certified, family scuba adventures filled their yearly calendars.  Which makes Brooke Semler among the relatively few on this planet who are equally at home way up there as well as way down there.