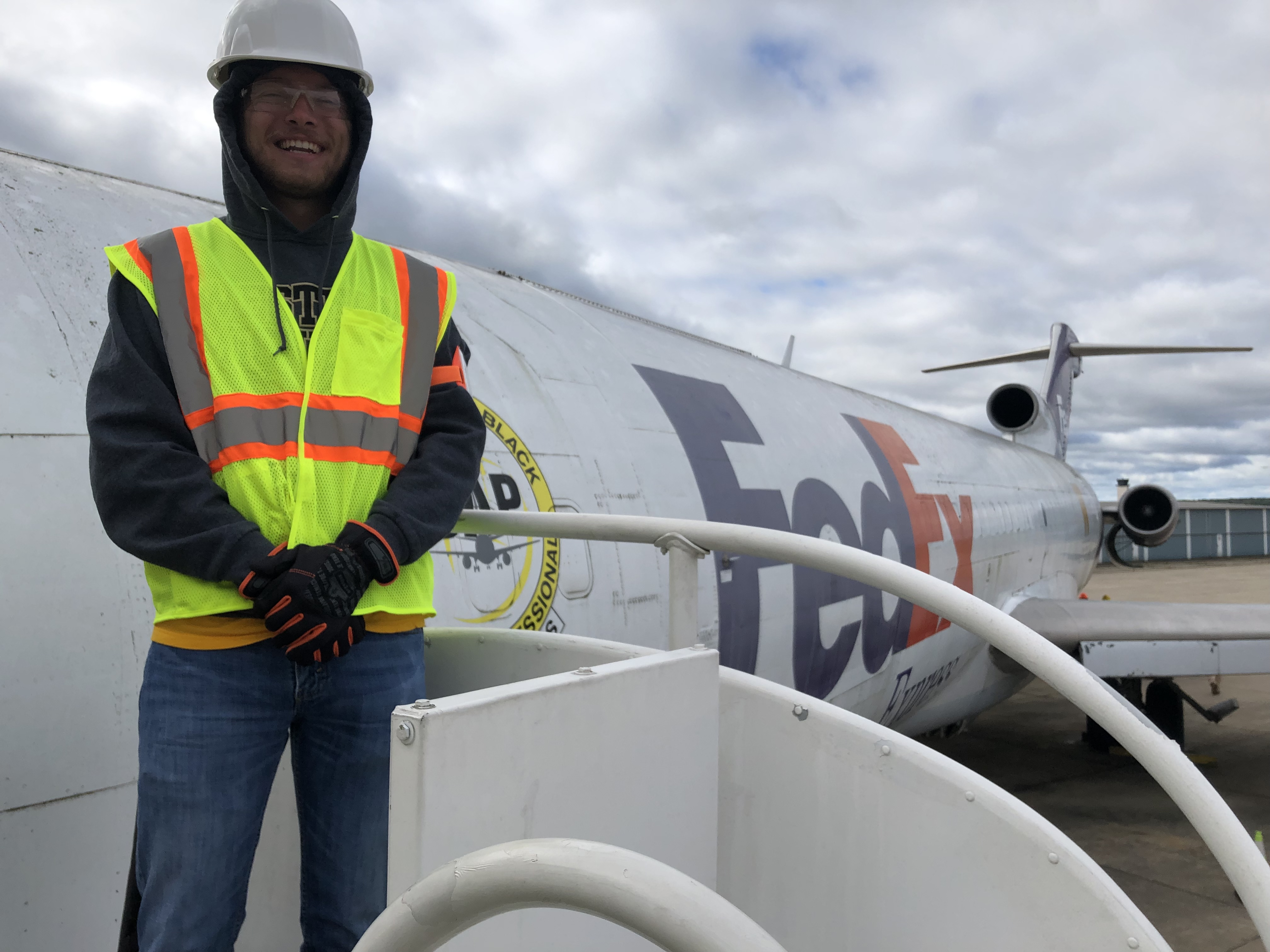 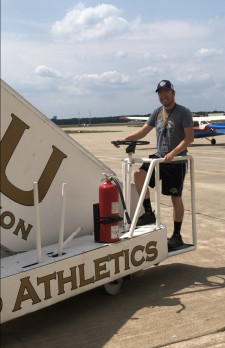 For a young man who hails from Marine City, Mich., and intends to join a branch of the military, it seems there would be only one logical choice.

Not for Patrick Senger, a fifth-year major in aviation technical operations in the WMU College of Aviation.

Instead of humming the notes that accompany "From the halls of Montezuma to the shores of Tripoli," he'll be doing the same for "Off we go, into the wild blue yonder."
Request WMU College of Aviation Information
And Senger can easily do that musically because he's been a member of the Bronco Marching Band for most of his college career.  So he knows a bit about formations -- both the flying and the marching versions.

The sky over Marine City is not on any typical flight path.  A community of about 4,300, it is located northeast of Detroit on the St. Clair River, which connects Lake St. Clair and Lake Huron at the base of the Michigan Thumb. For the geographically challenged, Canada is on the other side of the river.

Senger can't remember exactly what sparked his interest in aviation, but he can trace that inkling back to his years in middle school.  What pointed him toward the College of Aviation was some advice and "hearing good things" from one of his teachers at Marine City High.

Western's aviation program has a national reputation.  So does its marching band.  Senger was part of Marine City High's marching band, but didn't choose that extracurricular activity when he first stepped foot on the university's Kalamazoo campus as a freshman.  Missing that kind of energy in his college experience, he rectified the situation. 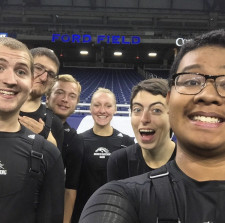 Senger with member of the WMU Bronco Marching Band

And did that yield some memorable moments? Try these on for size:

Academically, Senger has allegiances with Alpha Lambda Delta, the honor society for freshmen who achieve at least a 3.5 grade-point average, and Phi Kappa Phi Honor Society that recognizes academic achievement and scholarship for students no matter what their major or discipline. 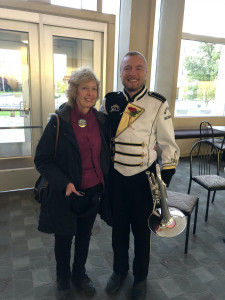 More in tune with his major is being a part of the college's Aerospace Maintenance Competitive Team and interning as a float-plane mechanic.  "What I enjoy most about the internship is the unique experience working on float planes that wasn't specifically available at WMU," he says.

Ranking at the top of his "favorites" are the friendships he has forged as a Bronco band marcher and those with whom he has shared aviation courses.  The latter are special because the faces in those technical-operations classes -- 25 or so -- were almost always the same.  He has played flag football, intramural basketball and ultimate Frisbee with most of them -- and enjoyed the camaraderie with almost all of them on any particular Thursday at Waldo's Campus Tavern in Kalamazoo. 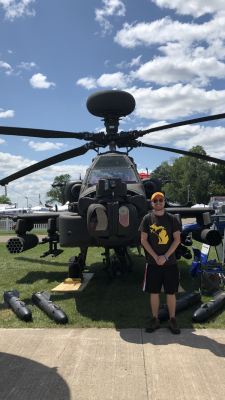 The "favorite" course was his summer-servicing class taught by Jeremy Heirholzer, Nate Lisak, Geoff Lindenberg, and Terry “Mr. Mitch” Michmerhuizen.  "I liked it because it was so different from other classes that I'd had up to then," he says. "Since it was 8 to 5 three days a week, my classmates became solid friends.  That time commitment also made it feel more like how a job in industry would feel like. It was a great way to actually apply what we've learned in other classes in a realistic, practical setting -- instead of just in labs."

Senger hopes to apply a lot of the "what he learned" after graduation.  He intends to apply for a pilot-officer slot in the Air Force.  "My dream job in aviation is to be a rescue helicopter pilot," he says.

Because he is a musician and knows his way around a piano, Senger will never be alone or bored in the days ahead.  All he has to do is tickle the ivories if one is handy.

There are 88 keys on a piano, about as many of the things a pilot has to check for a safe and successful flight on one of the college's two dozen Cirruses that students fly -- or a rescue helicopter, for that matter.