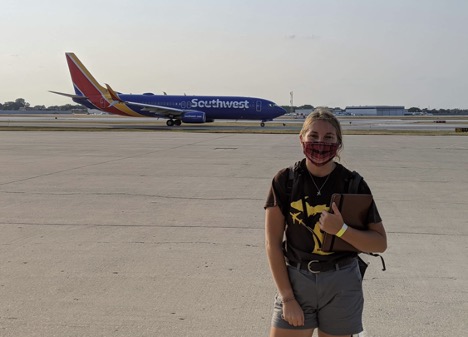 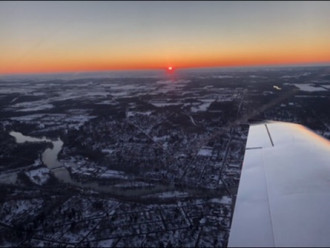 The Facebook folks, who have garnered their share of the wrong kind of publicity in recent years, should connect with the family of Amanda Charlton for a testimonial about the tech giant's true mission -- the sharing of good and valued information.  That's the reason Charlton, raised in Spring Branch, Texas, which is part of metropolitan San Antonio, ended up pursuing higher education way up north in aplace called Kalamazoo, Mich.  Here's how she tells it:  "I was not involved in aviation much prior to attending Western Michigan University," Charlton says.  "I had been on quite a few commercial flights, but I had not met anyone directly in the field.  Then my mom discovered Western's aviation program through Facebook and she brought it up to me.  "I started to research the program and decided it was definitely worth setting up a tour," she recalls about her introductory journey to the College of Aviation facilities.  "I visited during Christmas break and got to do an introductory flight in one of the Cirrus SR-20s.  I knew immediately that I wanted to become a professional pilot."  The welcoming attitude of her tour guide -- Austin Harper -- and the friendliness of her introductory flight's pilot -- Regan Lezotte -- didn't hurt either. Request WMU College of Aviation Information 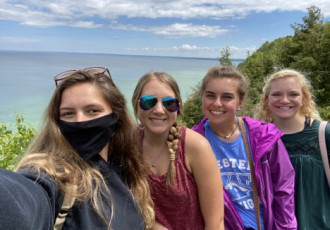 Charlton and friends traveling to Mackinac Island for a weekend

But there is a bit more to the story.  "Up north" wasn't completely foreign to her.  "I decided to attend Western because I have a lot of family who live in Michigan (an aunt lives in Grand Rapids and her grandparents live in Rochester in the eastern part of the Lower Peninsula north of Detroit) and I have always loved the state.  (Amanda ended up in Texas because her Air Force father was stationed there).

Was it a good decision?  You bet!  "I have really enjoyed the people," says Charlton, who now has senior status in only her “second year” at WMU as a dual major in aviation flight science and aviation management and operations.  Not only did she come in with 18 college credits from high school, but she also completed 14 credits over the summer of her first year.  "Right from the start, I felt like I belonged here."  Put yourself in Charlton's shoes.  She kind of went cold turkey when it came to campus life.  "I moved all the way from Texas without knowing a single person at the university.  Within the first week, I met fellow students who are still my main friends."  Such a fertile environment was similar at the college's aviation headquarters in Battle Creek.  "At the airport," she says, "I have met so many mentors who are not only the ones who give me the best advice, but have also come to be some of my closest friends.  Every person here -- from the professors to the certified flight instructors to the students -- want to see you succeed, and will do anything they can to help you do it." 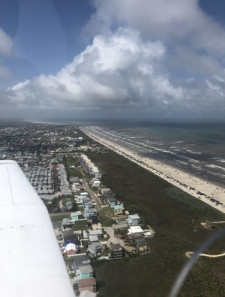 Charlton accompanying her flight instructor on a flight into Mustang Beach Airport in Aransas, TX

Currently working on her commercial multi-engine license, Charlton is following in the footsteps and contrails of the likes of Harper by serving as one of the college's aviation ambassadors.  "This has allowed me to promote our program and share what I love about our school," she says.  And that's not all.  She is the reigning academic committee chair for Western's chapter of Alpha Eta Rho, the fraternity that connects the aviation industry and higher-education institutions in producing successful careers for its members in aviation, aeronautical engineering and aerospace endeavors.  As the chair, she's responsible for organizing study sessions in order for members to meet their GPA (grade-point average) and course requirements.  For her personally, the organization is also a powerful networking resource.  "My biggest piece of advice to those who want to pursue aviation as a career," she says, "is to get as many experiences as you possibly can.  Don't be afraid to ask for advice and take advantage of the fact that this career is unlike any other.  Experience as much as you can."  Charlton took her own advice during the Covid situation.  "I messaged my first certified flight instructor while I was home in Texas and asked whether she had any available time to go flying.  It turned out that she was going to do her CFII 'check ride' the next day and needed someone to fly her to the beach to do it.  We ended up going for a three-hour, cross-country flight.  We flew over the coastline and landed at the airport on the other side of the beach.  It was one of the coolest flights I have ever been on." 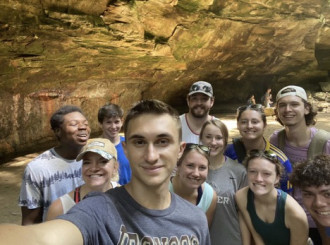 Charlton and friends on a hiking trip in Indiana

Professionally she is growing because of courses such as "Commercial Ground 1" taught by Dominic Nicolai, a lead flight instructor who joined the College of Aviation staff in 1993, right after receiving his diploma in aviation flight science.  "I really liked the material," she says.  "It was fascinating to learn about commercial procedures and operations.  The assignments were intricate, but they all built my understanding of important concepts for all levels of aviation."  Charlton has still another reason why she relishes her choice of WMU in seeking a career in the sky as opposed to attending an institution that is primarily aviation-related.  Western is a comprehensive, fully formed, multi-dimensional university that offers myriads of opportunities that speak to this perspective -- there is more to life than just a career or job.  "I was a fitness instructor at the Student Recreation Center last spring and I absolutely loved it," she says.  "I wanted to take advantage of the fact that I was at a university with the chance to meet people outside of aviation.  That job really helped me do that."  Down the line, Charlton -- other than continuing to spend some time in the gym -- plans on a stint serving as one of the college's certified flight instructors.  And then don't be surprised on a future flight when you hear -- "Hello, this is your captain, Amanda Charlton.  Thanks for flying Delta Airlines."