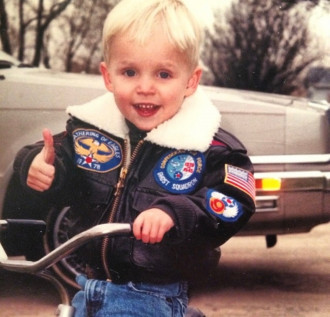 Let's see how this all worked for Adam Rice on his journey to becoming an airline pilot.

(1) Grandma attended Western Michigan University, which is not too far from where Rice grew up in Naperville near Chicago.

(2) An uncle, a private pilot for more than 20 years and the only family member joined at the hip to aviation, promised to take the young Adam for a ride -- an adventure that hooked him on a career in the clouds.

(3) The WMU College of Aviation's reputation in the industry is unmatched in preparing the next generation of professionals.

Now a first officer for SkyWest Airlines since his December 2018 graduation with a degree in aviation flight science, Rice complemented the above three bullet points with his own initiative.

His uncle fulfilled his first-flight pledge when Rice was a sophomore at Neuqua Valley High School.  That led to his first real connection to aviation.

Rice went to work for an aircraft-detailing company, starting basically at the bottom cleaning corporate jets as well as prop-powered planes -- something like a janitor's job, but still valued experience for the young man.

"I was able to learn a few things about the systems in general aircraft and how to properly clean airplanes," he says.  "That was such a great opportunity for a young aviation enthusiast."

Request Information about the College of Aviation
Once in Kalamazoo and after his first semester at Western in the spring of 2016, Rice was retained as a student dispatcher for the College of Aviation.  "I learned how to work with aircraft scheduling and was able to polish some great teamwork skills," Rice says.  "The dispatch office had a tendency to get very busy when the weather was favorable for flying." 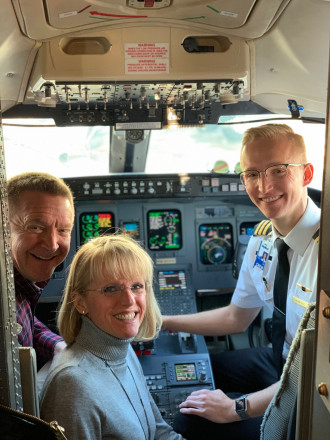 First Officer Rice sharing his "office" with his parents

Rice wasn't quite done adding to his resume while under the aegis of WMU.  In the middle of his sophomore year, he was hired as a flight instructor, which provided insightful experiences.  "I worked on the FOM (flight operations manual)," he says, "and I was lucky to do so.  As a flight instructor, I began to fine-tune my technique and skills, which I use today as an airline pilot."

Grandma aside, Rice said he was drawn to the College of Aviation "because of the people.  From the aviation ambassadors to the recruiting team to the staff, I was very impressed with their dedication to their students."

Some of that impression came home to roost for Rice during his first flight lesson when he was being schooled in a pretty important thing to remember -- how to land an airplane.  "My first instructor would always repeat the same few words as I was on final approach -- airspeed, runway, airspeed, runway.  Occasionally I will still hear his voice when I am landing these days."

Rice believes that his genesis as a professional pilot reaches back to one particular class -- instrument ground school.  "Without that solid foundational knowledge that was built into that course" he says, "it would have been tough to progress smoothly."

Jim Whittles, his instructor for that course, was at the front of the room for many a class in which Rice was enrolled, including one focusing on multi-engine aircraft.  "For those who know Mr. Whittles well," Rice says, "he takes a particular interest in the specific needs of his students."

Then there is Russ Kavalhuna, who parlayed a career as an airline pilot into law school and an eventual berth as a federal prosecutor. His mentorship was more centered on perspective and guidance in pursuing goals.  "Russ was able to teach me many things about delayed gratification.  I'm truly grateful that he was there during my stay at the college." 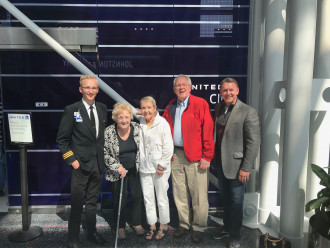 All of these human resources played a role in Rice -- not all that unusual for any college student -- overcoming a bit of personal anguish along the way, admitting that "I felt like I wanted to quit and that I wasn't good enough."  He recalls he encountered that hurdle "in my transition from Part 61 training to Part 141 training.  With the proper guidance and instruction, I pushed through the private-pilot transition course.  I would not be where I am today without that rigorous course."

There's always the pro-and-con, the ying-yang of human existence.  The exhilarating adventure of flying can be countered by being away from home for extended periods of time.  Rice cited two months in relative isolation as he underwent airline-pilot training.  Being on the road can be challenging, but batteries can be easily recharged with a few days off in a row.  "I find myself itching to get back in the airplane."

"If you do what you love," Rice says, "you will never work a day in your life.  My passion and career go hand-in-hand.  I get to be a part of something bigger than myself.  I get to work with incredible people.  Our jobs are rooted around one common goal -- bringing people and products together.  Watching all of that unfold is truly humbling."

His bank of memories is constantly expanding.  While still a Western student and working with one of the major airlines, Rice flew from the East Coast to the West Coast, and then made the return flight.  Not done yet -- he was off to Europe, all on the same, extended weekend. 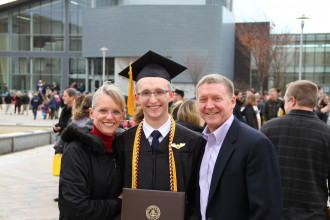 How about this one? When he qualified for a license as a private pilot, Rice's first passenger was "Mom."  On his 19th birthday, the whole family went for a ride under "Captain Adam" in a Cessna 172.  Recently two of his SkyWest passengers were Mr. and Mrs. Rice.

Rice envisions aviation as a comparatively small fraternity.  "You never know who might help you get to the next level in your career," he says.  "So, go above and beyond in your job and try to avoid burning bridges" -- which is solid advice for any chosen profession or trade.

"I promote WMU as much as I can," he says.  "As my fellow alumni enter the industry, I try my best to be a good mentor and help their transition to the cockpit."

When schedule permits, Rice will make his way back to campus to speak to members of Alpha Eta Rho, the fraternity for aviation majors. Friendships and resume building were among the fruits of his AHP affiliation, and he advises his listeners to follow in his footsteps. "I love giving students insights about this incredible career."  And he has plenty of insights to offer.