DePuy is the Guy! Finding his path and overcoming challenges, Brian lands at Envoy Air 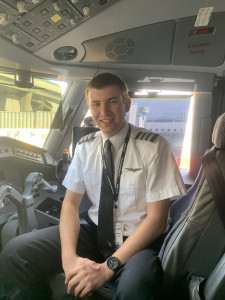 A single failure doesn't equate to total, abject failure because each setback can be a valued learning tool.  Brian DePuy has the life experiences to prove that.

For the WMU College of Aviation alumnus who now flies as a first officer for Envoy Air out of Dallas/Fort Worth International Airport, compiling a bunch of rejections in his quiver is how he eventually hit the bull's-eye.  Don't believe that? Just ask the successful novelists whose work room walls are plastered with rejection slips.

"I have been denied countless scholarships, internships and job opportunities," he says.  "Challenges and how we deal with them are possibly the most important factors in determining progress in a career.  My experiences have helped define who I am and establish a positive work ethic." Not taking "no" for a final answer led DePuy to a good scholarship, an instructor's job in the College of Aviation, and a treasured internship with United Airlines.  "At each of these steps," he says, "I had to learn that rejection or setback can be a positive learning experience."

DePuy was raised in Naperville, Ill., which is 28 miles west of Chicago and where he graduated from Neuqua Valley High School in 2013.  Father-and-son time often was breakfasting at a nearby airport watching planes come and go.  Mom, a frequent traveler, provided aviation-related stories that pointed DePuy toward a career -- and toward WMU as well.  He called the latter "the best decision I ever made." For him, it was mandatory to pair training to become a professional pilot with a comprehensive higher-education exposure.  He had checked out his possibilities and initially favored another "well-regarded" institution.  Yet, was it the "complete package?"  Mom didn't think so and convinced a "stubborn high-schooler" to make one more college visit -- in a place called Kalamazoo, Mich. Western proved to be the "complete package."  "It is a large university with plenty to do," he says.  "The campus is well-designed, and most important, the aviation program was undeniably outstanding with an excellent flight-training technology and fleet of aircraft. I immediately sensed the college's 'small-family' feel among the resources of a large university.  After the tour, I didn't have to say anything to my parents.  The look on my face did that." 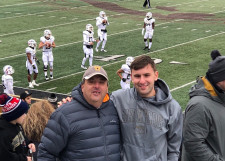 The Depuys at a WMU Football game

The unexpected part of that "complete package" was WMU's undefeated and greatest football season.  "That will be something I will always remember," he says, along with the drive with buddies down to his future home in Dallas to watch the Broncos play Wisconsin in the Cotton Bowl. Much happened to DePuy on his way to a 2017 diploma with a double major in aviation flight science and aviation management and operations.  One of the first additions to his resume was being part of the college's line-service department, which he has termed "a defining experience in my aviation journey by being involved in every aspect of the college's operation." 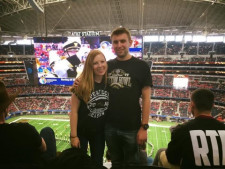 Given his head to take on special assignments, DePuy concentrated on the refueling of aircraft and he spotted some outdated practices.  Armed with tips he gained after a multi-day conference, he concentrated on creating a better system, eventually crafting a new aircraft-refueling handbook that implemented safer practices, created a more cohesive training program, digitized maintenance records and inspection logs, and helped ensure that the college's fuel truck would always be in tip-top shape. DePuy's project proved good enough for United Airlines to pick him as a flight-operations intern in his junior year at Western.  Based at its Chicago headquarters, that summer internship lasted 18 months during which he says he "experienced every aspect of an airline's operation," including weekend jaunts to Great Britain, Germany, France, Ireland, Chile, Japan and Hawaii.  Now that's an internship! While at United, he completed the requirements to become a certified flight instructor, which allowed him to join Western's cadre of instructors and later earn his CFII and MEI (multi-engine instructor) certificates.

Back at the Battle Creek base, DePuy served on the college's safety committee, "peer-counseled fellow instructors" and taught an instrument ground course as an adjunct professor.  With more than enough rejections in the pocket of his flight jacket, he persevered and received a scholarship from the International Society of Transportation Aircraft Trading, an association for people involved in all aspects of commercial aviation. Want more?  How about representing the college at the Experimental Aircraft Association's air show in Oshkosh, Wis. (the largest of its kind in the world), ferrying one of the fleet's Cirrus aircraft from Battle Creek to the college's training program in Punta Gorda, Fla., and serving as a summer-camp counselor to recruit the next generation of aviation professionals. All of which made it a fairly easy transition into the world of professional aviation as he joined the Envoy Air team.  One of the world's largest regional airlines and a wholly owned subsidiary of American Airlines, Envoy -- in its pre-Covid days -- booked 1,000 daily flights to 150 destinations in the United States, Canada, Mexico and the Caribbean. 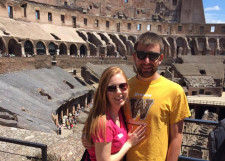 Not too far into his career, he affiliated with the Air Line Pilots Association, which was founded in 1931 and represents almost 63,000 pilots employed by 35 American and Canadian airlines.  Initially his local council's communications chair, he is now its secretary/treasurer and complements those duties with service on the organization's accident-investigation and air-safety committee. In facing any and all of these tasks or duties, DePuy will flash back to what he learned in College of Aviation courses taught -- and the real-life experiences relayed -- by such instructors and mentors as Jim Whittles, Lisa Whittaker, Marty Coaker, Russ Kavalhuna, Norm Risk, Aleks Copeland, Rob Bunday and Tom McLaughlin.  They were passionate and extremely knowledgeable about what they taught, infused pragmatism and relevance in their courses, cared deeply about their students by being mentors and "somebody to talk to," served as advocates, and offered wisdom about how to meet challenges and overcome hurdles. "Since my days at Western," he says, "I have come to recognize that every experience provides an opportunity to learn.  During my United internship, I was advised that a successful employee will find the job that needs to be done, not necessarily the job that everyone wants to do.  And then do that job better than anyone else could.  I have used those words to constantly seek opportunity because every organization has work that needs to be done." 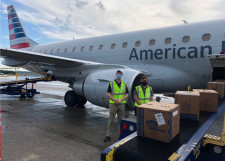 Part of that philosophy, in DePuy's eyes, is the caveat to "learn from everyone.  At WMU, I was advised to observe the leaders around you.  Analyze how they conduct themselves.  Find elements that you would like to carry forward and those upon which you would like to improve.  This can start as a flight student who will someday be an instructor.  Time as a flight student is a perfect opportunity to take mental inventory for setting a standard on how you will conduct yourself in the future.  I continue to learn from every captain that I fly with." That's how, DePuy believes, he will successfully confront the "unique set of challenges" faced each day -- learning how to operate in Mexico and Canada, or coping with mountainous areas and adverse weather.  With the right perspective, "these operational challenges have proved to be a lot of fun," he says. Covid 19 has been the unexpected challenge, but DePuy's strategy has not wavered.  Even the industry veterans he has encountered, he says, "seem to be surprised by the extent of the pandemic on our industry.  My ability to upgrade to captain and move on to my next job will be delayed (another setback) from my initial projection.  While the pandemic is uncharted territory, the feeling of challenge when my environment becomes difficult to navigate is not. 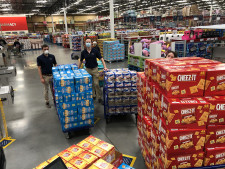 "I am convinced that this generation of pilots and professionals," he says, "will all have to answer the following questions in the future: What did you learn during Covid?  How did you improve yourself?  How did you help your company?  Your community?  I believe there are ways to make the best of the situation, even if it requires an unconventional approach." So, instead of a "woe is me" approach, DePuy took part in an American Airlines project to supply and assemble care packages for members of the military service and veterans whose families have been affected by Covid.  From that sprang an initiative to have Envoy take on a similar project.  The result?  "In a time when layoffs were rampant and money was difficult to come by," he says, "we were able to grassroots fund-raise, assemble and transport 2,500 care packages.  My fellow pilots, including WMU alumni, assisted with this. "The people who serve this country are truly one of our nation's greatest assets," he says.  "Working at Envoy, I've seen the caliber of individuals who the military produces.  I wanted to do my part to support their sacrifices." DePuy, now 26, was involved from stem to stern, including the delivery of those godsends to service members identified as being in need. And he wasn't done.  He helped build a wheelchair ramp for a Dallas-area disabled veteran and in 2019 took part in the "Pilots for Kids" program that delivered holiday gifts to youngsters admitted to children's hospitals. 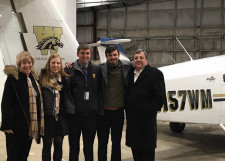 Depuy at his WMU College of Aviation graduation event

Volunteering is part of DePuy's "complete package" these days. So is a "productive hobby" away from his work environment, especially one that makes him better to function in his work environment.  He was a distance, free-style swimmer in high school.  After years away, he decided to get back in the pool and joined a masters swim club. "My goal was to move into competitive open-water swimming," he says, and that led him to a five-kilometer event.  "I find that swimming helps deal with my busy schedule and workload.  For some reason, a 5 a.m. swim makes a day's challenges easier.  I continue to swim three to five times a week." Covid willing, he plans on swimming competitively in 2021.  Knowing how Brian DePuy operates, it won't be surprising when his residence has a quiver full of trophies.