Even though he started in the welding trade, Nate Lisak has forged himself a productive and rewarding career as a "Tech-Ops" instructor for the WMU (Western Michigan University) College of Aviation.  Almost since he received his degree in aviation technology operations in the spring of 2017, Lisak has learned that it's easy to teach such courses as reciprocating aircraft systems and avionics because he's been a "Tech-Op' himself.

Request College of Aviation Information"I'll just say that I am spoiled," admits Lisak who grew up in Otsego, Mich., about 20 miles northwest of Western's main campus in Kalamazoo.  "The courses I instruct are usually the first class where students get 'to run up' aircraft, ignite fuel, and get their hands dirty working on reciprocating engines."  They can do all this, he says, "in a safe, controlled environment where they can make mistakes and learn from them.  I get the opportunity to see students grow, from those first classes to their very last summer at the College of Aviation.  Watching their confidence develop and see them move into careers and internships is what I love most about my job."

Lisak did not go directly from Otsego High School into the college's aviation curriculum.  In his "nontraditional" approach, he first sampled life as a professional welder, and a pretty good one at that.  "I had always loved wrenching," but Lisak says he had never linked that affinity to the world of aviation … until a welding co-worker talked about her spouse working at Duncan Aviation, which has a prime base of operations adjacent to the Battle Creek Executive Airport at Kellogg Field -- also home to the WMU College of Aviation.  In an adult version of an eighth-grader taking part in a career-sampling fair, Lisak checked out the Duncan facilities and witnessed the daily mechanical challenges.  "From the first time seeing all of the work being completed on those aircraft," he says, "I fell in love with aviation and never looked back.  One month after the tour, I had quit my job and enrolled in the College of Aviation."  Lisak accentuated what he learned from his technical courses by serving two internships -- one "in house," so to speak, as part of the college's "wrenching" team that keeps its fleet ready to fly, and the second with the Stryker Corporation's highly regarded aviation-maintenance department.  "With the college fleet," he says, its really good cadre of trainers "helped build my confidence and expand my experience working on smaller aircraft."

At Stryker, his mentor was the department's director, Greg Hamelink, who has assembled the "best A&P mechanics and pilots."  Lisak is not the only college staff member who has flourished under Hamelink's tutelage.  "His Stryker team works like a well-oiled machine.  Their attitudes and work ethic are top-notch in the aviation industry.  The Stryker group didn't just show me how maintenance is done … but how to be a member of the aviation community and understand what a true team looks like."  Lisak has taken those internship lessons with him as a COA instructor.  Because he was able to qualify for his Air Frame and Powerplant (A&P) credentials prior to graduation, Lisak had the "cred" to work as a "lab tech" on the college's fleet, teach classes as a "sub" when needed, and eventually be assigned his own litany of courses to oversee.  He also found time to log hours with Stryker during its peak maintenance period, giving Lisak the chance to get up close and personal with "some of the most sophisticated aircraft in the general-aviation and business-jet world.  These opportunities made me realize how much I enjoyed instructing and developing a person's skills," he says.  But Lisak wasn't quite finished enhancing his resume.  He polished his lab-tech skills with a stint at Parker Hannifin's aerospace division working on hydraulic-systems components for aircraft varying from Gulfstreams to Boeing 777s.

Lisak with his wife Carley, and their son, Luke

"I feel that all my experiences have allowed me to instill flexibility and adaptability into the next generation of maintenance technicians," Lisak says.  "You just never know what tomorrow will bring, but if you surround yourself with a supportive and positive work environment, you can overcome any obstacle."  Lisak has survived and grown from "what some tomorrows have brought."  He says, "I have loved watching the upgrades and the changes to the 'Tech-Ops' equipment and fleet.  When I was a student, all of our equipment was military surplus that had seen better days.  I had the opportunity to help install all new stuff in the powerplant and structures lab.  Everything was updated and improved to the high level that it deserved to be."  Assisted by other colleagues such as Jeremy Hierholzer, the fleet's functionality was tuned up to the best of its capabilities.  "The Baron's powerplant did not function very well the summer before I graduated, producing very low power when it did.  Jeremy and I spent a lot of time correcting that."  When a new addition to the fleet -- a Mooney -- was delivered on a flatbed trailer in pieces, that situation prompted a real-life, Major-League project similar to crafting a stick-model aircraft back in childhood's bygone days.  "I loved being able to reassemble an aircraft.  Although the aircraft will never fly again, it does have a special place in my heart!" he says.  Lisak has been more than a "Mr. Goodwrench" for his students to emulate.  He sets up mock oral and practical exams for students who are about to take their A&P tests.  "That is very stressful because there is a great deal of information you are expected to know.  I hope these extra activities and practices lessen the stress, and guide them toward the career paths they've worked so hard to reach." 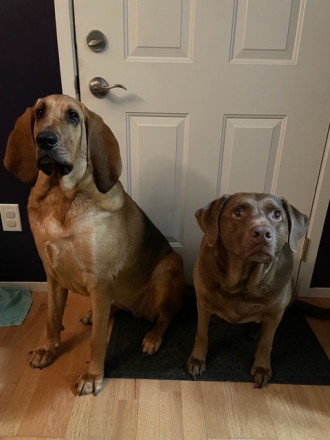 He also serves as the faculty adviser for the college's team that takes part in the national Aerospace Maintenance Competition.  Because the competition is part of a major conference, Western students can make all kinds of connections with aviation companies and organizations.  In addition to being about halfway toward a master's in business administration, Lisak is involved in "other" extra-curricular activities that benefit both his own comprehension and the college's future.  As a member of the Western Faculty Senate, Lisak can grasp an understanding of university-wide matters and issues, as well as sample the perspectives of instructors in other academic disciplines.  He sits on the "Tech-Ops" curriculum committee, which he regards as a key task because of the rapidly coming challenges he foresees.  "Aviation is constantly updating.  The future of AMT (aviation maintenance training) is in for a big change shortly and I want to be part of it," -- another lesson from his Stryker experiences.  Down the line as well, Lisak would like a role in research for his sector of the College of Aviation program.  "I see research as a challenge that is right now out of my comfort zone.  I think I'll take on that obstacle after my master's is done."  What has never been an obstacle for Lisak at the College of Aviation has been a lack of support from the bevy of friends and colleagues now inside his comfort zone.  "My colleagues are rock stars.  They have always been there for me."  The latest example was Lisak's debut in teaching a propellers lab.  "All I had ever completed in the prop world was removing and replacing them.  But I had great support from the staff.  They helped teach the teacher." 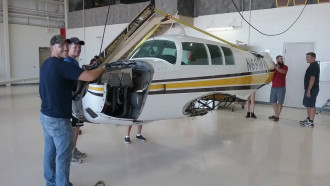 Lisak's project of love - the Mooney

All these kudos also apply to wife Carley who, with two working parents, two 100-pound dogs and a 2-year-old named Luke, "keeps our family's chaos in check.  In a small house and me working on a master's, there is never a dull moment.  When things seem overwhelming, she is always there to support me."  Young Luke appears to be a small nut off the old bolt.  He seems destined to be the kid who takes apart the lawnmower, power drill and TV set.  Instead of playing a video game, he would prefer to learn what makes that technology tick.  "Luke is going to be a mechanic," says the proud father.  "This was not forced on him.  But at 2, he knows how to inspect and maintain a fleet of Hot Wheels.  He is currently helping me fabricate a go-cart.  Everyone says he is a mini-me.  He always wants to get out into the garage to help Dad."  Looks like there will soon be a father-son team that is part of "Tech-Ops" at the WMU College of Aviation.